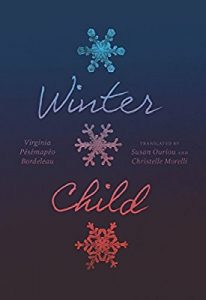 The death of a child is an experience that most of us—parents especially—cannot bear to imagine, and certainly cannot imagine surviving. But with Winter Child Virginia Pésémapéo Bordeleau has done more than imagine it: the Métis writer and artist endured the death of her own son, Simon, when he was a young adult.

A blend of fiction and memoir, Winter Child opens with a very tense description of a traumatic birth and the subsequent, successful resuscitation of the baby, who is born not breathing. The description is graphic, the writing immediate. Sentences like “His tiny, limp arms dangled on either side of her waist” give a sense of the characters’ inability to control the situation. This latter is the winter child, the narrator’s son, a baby who initially resists birth but then goes on to thwart death on several occasions during his childhood.

The novel seamlessly transitions between third and first person, and between chapters about the nameless narrator’s son and her father, both now dead. Addressing her father for most of the text, she tries to make sense of their difficult relationship. His death, the narrator realizes, has left her “at the crossroad between the road to maturity and that of childhood, a childhood that was mine as late as yesterday because you still lived. That morning I was no longer anyone’s daughter, and my orphanhood rattled me.”

The switch between viewpoints is also a switch, for readers, between grief’s unbearable intimacy and a just-about-bearable distance from it. The narrator’s memories of the two dead characters interweave and overlap, shed light on each other as the novel develops. Moving through the book, the narrator’s and her son’s respective childhoods, with their attendant pain and grief, echo each other. It’s only by becoming a mother and unintentionally or unavoidably inflicting pain on her own son that the narrator is better able to understand her own upbringing, which was affected by alcoholism and other systemic social problems. The narrator reflects on the differences between herself as a child and her son as a child. She feels let down by her parents—her mother who frequently abandoned her family when she was drunk; her World War II-veteran father full of rage and hostility—who failed to protect her from being sexually abused by her older brother, who was a residential school survivor. A Métis writer and painter much like Bordeleau, the narrator eventually goes on to abandon her own son for a period of time. Bordeleau often leaves particulars around these incidents vague; part of the novel’s focus is working through the reasons the narrator was unable to break this cycle of pain and cruelty.

The first, longest, and by far the most compelling of Winter Child’s three sections, “The Cry,” is a howl of pain, the narrator’s working-through of terrible memories and problematic relationships. Raw and terrible, it recalls the French writer Michel Rostain’s part-memoir The Son, told from the perspective of a teenager who has died of meningitis, and whose author sums up the situation thus: “It’s impossible to wish to live after such a horror; it is impossible to imagine that distress. But it is possible to live with the result.” Bordeleau’s work focuses more on loss from the parental perspective but ends up in a similar place sharing the small, slow, yet inevitable steps a parent takes after bereavement: one day, one hour, one minute at a time.

That healing process is the focus of the second section, “Life,” which turns to the narrator’s often unsuccessful attempts to find meaning after bereavement. Here, eventually, there is resilience. It’s in this part that the narrator’s friends prove crucial to her survival—not by trotting out well-meaning useless platitudes like “Time heals all wounds” but by gently bringing the narrator back into the world. Slowly she returns to the activities that give her joy, and finds that she is able to move past the stopped-clock stasis of grief, learning new things, attending a healing Sioux retreat, and even exploring the possibility of a new relationship.

The final section, just a few pages long, imagines the son speaking to his mother, reassuring her, explaining things she could not have known, absolving her from guilt.

Poetic and hauntingly beautiful, Winter Child delicately describes, yet does not get swallowed up by, grief’s gaping hole. That beauty can come from such pain seems, on the one hand, tragic; yet the entire book is a testament to love and life. Moving between son and father, its structure evokes the passage of time as well as the disruption of the expected order of things when a child dies before a parent.

Winter Child is a long, agonized wail of despair, but it is also a means of remembrance, of bearing witness to a son’s life. It is also, ultimately, a way for the narrator to decide, almost against her will, that it is possible to continue living after such a loss, and that even love and art might not always be unimaginable. Nothing can ever be the same again, but life really does go on.