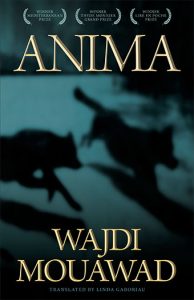 The police tell Wahhch that they can’t arrest the killer, a Mohawk man named Welson Wolf Rooney, because he’s hiding on a nearby reserve where they have no jurisdiction. Wahhch decides to track the killer down himself, not, he claims, for revenge, but because he just wants to see his wife’s killer’s face. Chasing Rooney leads Wahhch from Montreal to New Mexico and through one hellish experience after another, and prompts a resurfacing of events from his early childhood in a refugee camp, where his family was massacred and he alone spared for reasons he never previously understood.
Mouawad borrows from an African tradition in having Anima narrated by a wide range of animals, from house cats to fleas to crows. As in André Alexis’ Fifteen Dogs, these are not dumb beasts—their perceptions of humans are sophisticated. Their own world, red in tooth and claw, might seem cruel, but it also acts as a kind of counterpoint to the humans’ viciousness: one of Anima’s themes is the distinction between pointless barbarity and cruelty resulting from ongoing cycles of violence.

It’s notable that Anima’s animals are more numerous, and more carefully differentiated, than its handful of (minor) female characters; one is dead when the novel opens, and one is dead the day after meeting Wahhch. This would be less noticeable if Mouawad hadn’t made headlines in 2011 for publicly defending his decision to cast his friend, the French rock singer Bertrand Cantat, in a theatre production shortly after Cantat spent four years in prison for murdering his girlfriend. “He will always be the man who killed, but he is also the man who faced justice […],” Mouawad wrote in Le Devoir. “Is it just to condemn a man twice for a single crime?” Perhaps not. But his girlfriend will always be the woman who was killed, and she is still dead.

We have become accustomed nowadays to asking a question that once seemed churlish: whether a man like Mouawad, ostensibly committed to social justice, can be part of the problem. That this otherwise politically complex novel has little room for women except as victims and nurturers is discomfiting. But it’s not just the lack of space Mouawad makes for women that’s discomfiting, it’s also the gratuitously graphic ways in which he depicts them. Wahhch is incongruously matter of fact when he repeats the details of his wife’s murder: “He stabbed her… in the her abdomen. A wound. … A vagina. He raped her in the wound. … He left his knife in the belly, in the fetus.” (On the first page, however, we are told that the knife was left in the “sex,” presumably the vagina—an odd inconsistency.)
Another creepy scene involves Janice, a woman from the reserve who takes Wahhch in to protect him after he upsets a group of Mohawk men with his search for Rooney. She and Wahhch have sex, during which Janice—who had sex with Rooney two days previously—describes her own body as “your meeting place with him.” Weirder and more disturbingly still, she commands Wahhch to “Rape him [Rooney] now!” as he thrusts into her. Some hours later, Janice is savagely murdered in the next room while Wahhch sleeps on, oblivious. The plotting only gets more improbable from here on.

It’s true that it’s not just the women who are subject to violence—there are some horrific incidents at the refugee camp and on the reserve—but the women’s brutal treatment seems less coherent, more there for the sake of it. I can’t entirely fathom Mouawad’s intentions in this: are we supposed to be appalled, jolted out of some kind of complacency? There’s no doubt that he intends to make the reader uncomfortable, but my own discomfort came less from the savagery of his descriptions than from the disconnect between authorial intention (hard-hitting social criticism?) and execution (­fetishization). Perhaps the real question to ask about this book is how we would interpret it if it were written by a self-confessed right-wing misogynist.

In addition to a problematic portrayal of women, Mouawad’s Indigenous characters are distinctly unsympathetic: many of the men are violent or criminals, involved in either organized crime or ad-hoc vigilantism. In context, Mouawad appears to be trying to demonstrate the ongoing effects of colonialism, but his efforts feel clumsy at best, stereotyped at worst. First Nations writer Eden Robinson’s work treads similar ground, but she tempers it with humour and warmth—and with far more nuance.

The best parts of this novel involve the refugee camps and their subsequent long-lasting effects on Wahhch. But overall, Anima is a disappointing novel that traffics in some of the very things it sets out to criticize.