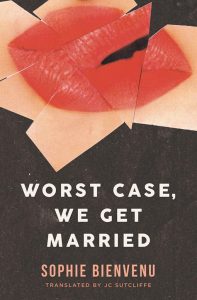 “Ill at ease”: that’s the phrase, antique but applicable.

With Sophie Bienvenu’s one-of-a-kind Worst Case, We Get Married I found reading sentences on pages discomfiting to the point of putting the reading experience on hold (aka, stuffing the book in my backpack) because of the reaction-fireworks key scenes managed to induce—feelings related to collusion, exploitation, resentment for being placed in the position of hapless voyeur, and, perhaps, fear of getting caught.

The novel, which to appearances is set on a single day, is written as a kind of dramatic monologue. Across twenty-nine untitled sections, a girl, Aicha, speaks to a woman (addressed as “you”), who is recording Aicha’s words and taking notes. The person might be a legal counsel, police representative, or psychologist. Aicha is being interviewed because something has happened that she witnessed. In short, she’s a person of interest. Bienvenu teases out plot elements but doesn’t reveal the crime, its victim, or its perpetrator until the book’s closing pages.

When you “like a guy,” Aicha informs the transcribing woman in the room, “it gets really tricky.” According to her, though, when “you give a blowjob to the brother of some guy from school” it’s a cinch. Yet, listening in on the one-sided conversation—inevitably picturing the scenes and assigning value to the sentences where pre-teen and early adolescent lust, yearning, sexual lyricism cannot be discounted—grows wildly distressing with its implications. To find actual eroticism in the words of a thirteen-year-old recalling her “fun” as a nine-year-old (via, of course, an adult author named Sophie Bienvenu, who turns forty next year)? To consider that a nine-year-old can pursue, agree to, and/or enjoy sexual experience with an adult male? To pathologize Aicha, as Baz does, as being “sick in the head,” or to entertain the idea that her sexual precocity is a direct result of her inherently perverse sexual experiences with Hakim?

Worst Case, We Get Married pushes these questions at the voyeur, Bienvenu’s unsuspecting reader. No doubt they’re provocative, if incendiary questions. They’re also proverbial—a can of worms—and seem nearly impossible to discuss in the public realm of 2019. And, not to mention: wholly impossible to answer.