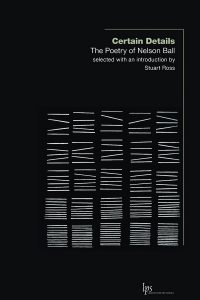 Nelson Ball’s Certain Details is the latest addition to the Laurier Poetry Series, a growing shelf of slim selecteds by poets ranging from the generation that came to prominence as Modernists (Dudek, Scott, Purdy), to poets born in the 1960s and 1970s (Sina Queyras and derek beaulieu) for whom the LPS book is their first chance at a selected poems. Most of the books contain an afterword by the poet (with the obvious exception of those poets who were already dead), and each has an introduction by the editor. Most contain about sixty to eighty pages of poetry (Nicole Brossard, the exception, gets 118 pages), and attempt to provide a good survey of the poet’s work as a whole. Clearly they are intended primarily for the classroom market, but any reader wanting to divagate in the world of Christopher Dewdney or Jan Zwicky, for example, will find the LPS books devoted to them an excellent cicerone.

Nelson Ball was born in 1942. He began to publish poetry in the 1960s, and was an important part of that group of sixties poets who were influenced by William Carlos Williams and Raymond Souster. Like Souster before him, Ball founded both a press (Weed/Flower) and two magazines (Weed and Hyphid) to publish poets like bp nichol, David UU, Victor Coleman, and many others, publishing activities very much in the tradition of Contact Press and other post-war literary projects. Ball published extensively in the late 1960s and early 1970s, but as his antiquarian book business developed, he stopped writing for a number of years. After moving from Toronto to Paris, Ontario in the mid-1980s, he began to write again. A book entitled With Issa: Poems 1964–1971 (1991) took stock of his earlier period; since 1994 he has regularly been publishing new books of poetry. Certain Details includes selections from all of his work, and Stuart Ross has made judicious and representative choices for the book. His introductory essay deftly sketches Ball’s career and makes the necessary critical points about the poetry: how it focuses on the visual without neglecting sound, and how it attempts to minimize the presence of the person while remaining uniquely “Ballesque.” (“Be objective; try to avoid subjectivity,” Ball once counselled himself in a list of rules for writing influenced by Ezra Pound’s “A Few Don’ts.”) Nelson Ball’s poetry really needs no introduction, as Ross admits. It is usually straightforward, embodies relatively simple language, and avoids rhetorical tropes at all costs. By turns it can be funny, touching, revelatory, and moving. It is always to the point. “Epic,” a seven-word poem, is a good example:

The title is meant to be a joke, but it also makes the case that even the smallest details observed in the natural world can be highly significant when focused on intently.

Certain Details concludes with a lovely autobiographical essay by the poet, a first (I believe) for a writer who is self-admittedly something of a recluse in real life and an ascetic in his literary life (“Some/days//I startle/at my shadow”). He evokes his rather lonely childhood movingly; remembers the great Village Book Store, owned by Marty Ahvenus, and its importance in the literary world of sixties and seventies Toronto; and unassumingly explores his aesthetic tenets, admitting, even as he lists his rules for writing, he notes that he didn’t always follow them. Unsurprisingly, he tells us that his favourite poet is Lorine Niedecker, and, most amusingly, he suggests that “poet” should be a “named disorder on the autism spectrum.” (Well, Asperger’s disorder, childhood disintegrative disorder, why not poet’s disorder?) Given how unadorned and simple his poetic language is, it is astonishing to learn that his poems can go through many drafts, following years of recording observations of nature and language. And for a poet whose emphasis seems always to be on the observed world, his statement that “I attempt to express the ineffable” is a revelation. 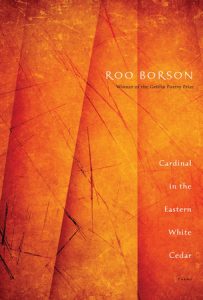 Nelson Ball is a nature poet at heart, and so is Roo Borson. The title of her new book comes from the long prose journal with which Cardinal in the Eastern White Cedar concludes, called “Cedarvale Diary.” There she records the comings and goings of birds, the antics of squirrels, and the life and death of trees and plants in the ravine near where she lives in Toronto and where she walks often. Her “album of days” is a little humdrum at times, but she is acutely aware of her own mortality amidst the progression of the seasons in what she describes as the “penultimate” time of her life. She will risk the pathetic fallacy (“don’t the blossoms love it this morning” she asks in one entry) and occasionally grows pensive about the teeming life around her (“All of nature is a kind of subtraction, with nothing left over”). But mostly she just observes, content to describe her surroundings, willing even to end one entry with the slightly bathetic wrap-up “And that was the end of our idyll of the birds and squirrels.” Idyll is a good word for this piece. It is an urban idyll she lives, but one that does sometimes recall the pastoral poetry of the ancient world.

“Cedarvale Diary” is preceded by two sections: a sequence of poems about a trip to Italy in the company of her husband and two friends, and a more diverse section of poems where, again, nature is the prime subject. The Italian poems are observational too, though of history and manmade objects rather than of nature. Borson’s language is lively here, as in this description of cats noticed at the ruins of the Baths at Caracalla:

the ruins. Two brothers, striped,
well-equipped in eye and claw,
communicating with a look and a glance,

In “A Sideways Spring,” from the second section, Borson charmingly dismisses herself as “just another tousle-haired old poet,” but it’s not true. She has an interesting mind, a good eye, and a smart way with language. She is not afraid of rhyme and metre (read that line about the three hedges aloud: it’s a trochaic pentameter), but mostly her line is not so formal, though it is always alive to stress, as good poetry must be, as well as to music:

There are places on earth the soul must
appear,
and others it shies away from, but here,
neither,
never, nor, and no spring comes, only trowels
and turnings and wheelbarrows full of
flowers,
the jackdaws hopping across the
straightened graves.