In Jocelyne Saucier’s fifth novel, And Miles To Go Before I Sleep (Coach House Books), an elderly woman named Gladys mysteriously vanishes after boarding a train in Northern Ontario. The narrator of this tale, an inquisitive English teacher (unknown to Gladys), undertakes a rigorous investigation of her disappearance, discovering, along the way, a series of complex individuals, including Gladys’s daughter Lisana. Saucier’s last book, And the Birds Rained Down, the first Canadian novel to win the Prix des Cinq continents de la Francophonie, was translated into 15 languages and adapted to the screen by Quebec filmmaker Louise Archambault. Born in New Brunswick, Saucier now lives in Abitibi, Quebec.

Megan Durnford is a Montreal-based writer and documentary filmmaker.

This interview was conducted in French and translated into English by the interviewer. 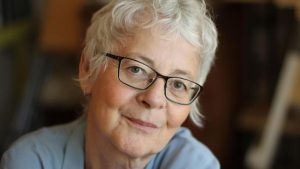 Megan Durnford: The Abitibi region is central to your fiction. How long have you lived in this region of Quebec and why are you so attached to it?

Jocelyne Saucier: I was born in New Brunswick, but then my father moved us 18 times in 18 years. We lived in many places, but mostly around Abitibi (in the north). So I wasn’t really attached to any one place. After studying political science, I went back to Abitibi to launch a newspaper with some friends and that’s when I really got to know the people of Abitibi and I started to feel really connected to the region. I feel like I have been a real Abitibienne since my early 20s. I have worked as a journalist for many different media here. Abitibi is a “new” region, a region on the frontier, a place defined by wide open space, where everything is still possible. There is a spirit of freedom, a real spirit of independence here. The spirit of the North.

MD: At one point, the narrator of And Miles To Go Before I Sleep wonders “how he came to stray into lives other than his own”? What drives you to write fiction?

JS: I ask myself the same question. I am a novelist, and I think that it is because my own life is not enough. I write fiction because I need to live lives other than my own. It’s also because I love the act of writing; I love prose, building sentences, the work of words. I never desired to be a “writer”—the writer’s life with book fairs, conferences, the prestige of being a writer—that is not what interested me. I love writing so yes I do like solitude! But I am not antisocial. I have a few neighbours and we form a little community around the lake. In my books, there are groups of friends like this— a little community of people who help each other out but also respect each other’s space.

MD: Can you tell me a bit about the genesis of this novel? 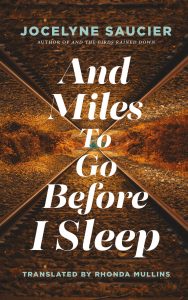 And Miles To Go Before I Sleep by Jocelyne Saucier Coach House Books, 208 pages.

JS: One time I was taking the train from Cochrane to Toronto. And on that train there was an old woman was sitting still on her seat. This train is very slow—it takes about 10 hours to travel 500 km. This lady had a cooler with sandwiches and she had a pile of magazines. She did not talk to anyone during the entire trip. And she never left her seat, even when the train was stopped behind a freight train for hours. All the other passengers were talking quite a lot. And I wondered why is she sitting so still? Why isn’t she talking to anyone? Is she fleeing something or someone? Does she know her destination? This lady became Gladys, the protagonist of And Miles To Go Before I Sleep. The narrator—who is my alter ego—is trying to figure out what motivates Gladys to travel. He also wonders why he is motivated to write about her experience. It is a story within a story.

MD: The narrator of this story is investigating a mystery. At what point did you choose this literary form and why?

JS: I chose the form of a chronicle, an investigation, because I wanted to have my hands full. I wanted to have lots of material to touch, to work with. It is a novel about wandering. There are many wanderers, many characters, in this story. You meet lots of people during a journey. Also, I wanted movement. I wanted readers to feel the beat of a moving train.

MD: I know that it took you five years to write this book. Can you tell me a bit about the research process?

JS: I spent a long time travelling in Northern Ontario. I wanted to experience the train journey that Gladys does; see the landscapes that she might have seen, meet the people that she might have met. I travelled a lot by car and by train. Sometimes, I rented rooms from local inhabitants. A bit like the character Leonard Mostin, I was searching for a novel but I didn’t know what it was about. When I first heard about the “school trains” that brought education to children who lived in the forest, I was fascinated. It was surprisingly difficult to find out more. For instance, there was absolutely nothing in the archives of Laurentian University in Sudbury. Finally, thanks to the efforts of someone I was renting a room from in Timmins, I met a woman who lived in the woods who had been a “school train” student. She helped me to locate other former school train students. I found this was absolutely fascinating. It is hard to believe that no one knows about them, considering that school trains were once so popular.

MD: Despite valiant efforts, Gladys can not convince her unhappy daughter to adopt an optimistic outlook. And yet, this daughter eventually manages to find her place in the world. Is this novel a comment on the quest for happiness?

JS: Gladys, who is fanatically optimistic, has confidence in life. She does everything to try to bring her daughter round to the brighter side of life. So there is this opposition between one who trusts in life and one who doesn’t. One who believes in happiness and one who doesn’t care whether she is happy or not. Yes, this novel considers the search for happiness. I feel that in our society, especially North American society, there is a tyranny of happiness, of our search for happiness. We are continuously wondering whether we are happy or not. So, we often conclude that we are not happy. And yet, “not” being happy does not necessarily mean that you are unhappy. We are both happy and unhappy, sometimes at the same time. Some people are not able to be happy. By expecting them to be happy we make them more unhappy. It makes us uncomfortable to see unhappy people because it makes us feel insecure—we are forced to question our own state of happiness.

MD: In your last two books, there are characters who feel very strongly about taking control of their own deaths. Why does this issue resonate with you? How would you like your own death to happen?

JS: There are two important moments in life: birth and death. I believe that it is possible to “live” your death, the final moment of life. In our society we don’t want to think about death, we don’t want to see it. But to have a chance to “live” your death serenely is acceptance. My last two novels include passages about accepting to fully experience this final moment of life. I am in old age now. (It is a privilege to be able to grow old!) And I think that this time of life is given to us in order to accept death, to slowly start to accept it, and also to accept all the beautiful moments that we have had in life.

I would like to die in my bed. I have not yet thought about other details. It’s a long process. First, you have to accept that you are ageing, then you have to accept the idea that you will die and then, finally, how you would like it to happen (If you have an opportunity to choose). Our society’s current debate about the process of death and assisted suicide is healthy but it needs to take place slowly and serenely.

MD: One of Gladys’s favourite sayings is “When you have known happiness, it is impossible to believe that it is no longer possible.” Is this your experience?