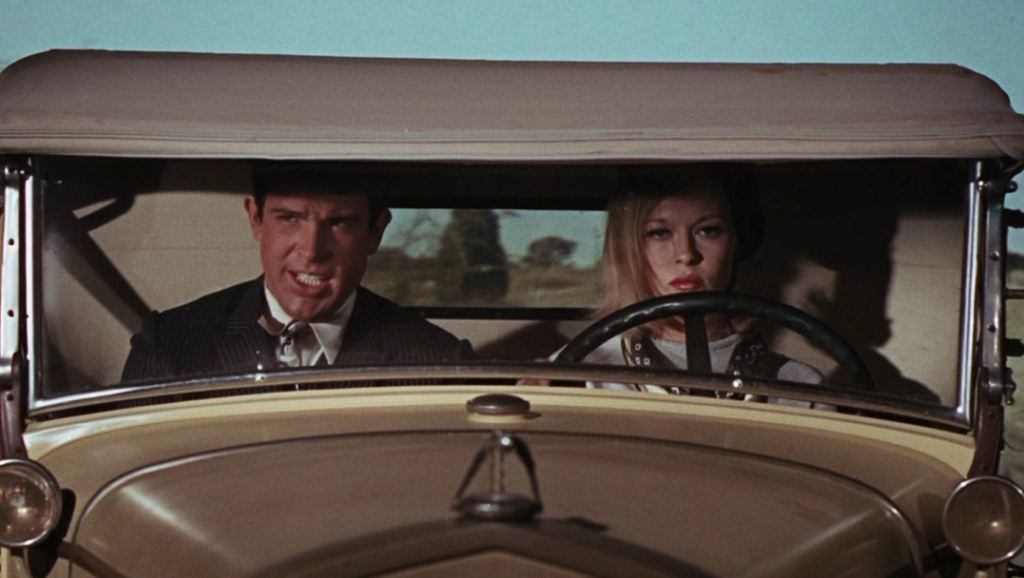 We are an erratic species with an unerring instinct for self-annihilation. Much of what we love—tobacco, hard liquor, unprotected sex—is potentially fatal; our desires resistant to politicians’ and social media scolds’ best efforts to “redirect” us (as we say about angry toddlers or demented elders). At the movies, where nostalgia reigns, we can still watch actors fulfill those urges that are frowned upon, if not banned outright, for the rest of us. But movies do (and, some would argue, should) succumb to societal pressure too. Cigarettes, for example, have all but disappeared from most films and full-frontal nudity typically earns an “R” rating (though a full-postal body count is still fine). Will dangerous driving be next?

The Official MTO Driver’s Handbook admonishes: Driving is a privilege – not a right. Most of us have logged a lot of screen time before we first get behind the wheel, so do movie directors have a responsibility to protect us from harm? Here’s a random sampling of rules and advice from the Handbook, and an equally random, unscientific sampling of how the movies measure up: 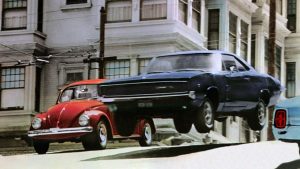 Your driving instructor knows that while you have to adhere strictly to the speed limit on your test, in actual traffic, you’ll need to go with the flow. But what if the flow is homicidally fast and your fellow drivers actually homicidal? No one in the Fast and Furious franchise lags behind. On the other hand, street racing, according to the MTO, “is one of the most serious and reckless forms of aggressive driving.” It means six points off your license and the immediate surrender of your vehicle, plus a possible criminal charge. So…

Pedestrians in the Terminator movies don’t count because they’re all evil robots. No one actually believes that when you run someone over they get right back up with red glowing eyes, right? (Or that innocent pedestrians would be able to jump out of the way of Jason Bourne’s car in time). Right? How you judge the movies on this score probably depends on whether you believe first-person shooter games inspire first-person shooters.

This one isn’t actually in the Handbook, but it’s common sense; the domino effect of vehicles slowing down to gawk at a crash is notorious. Most onscreen drivers are going too fast to notice accidents, but the gawkers in Cronenberg’s Crash go way beyond innocent voyeurism. I suppose you could say the exception proves the rule, but it’s a pretty spectacular exception, wouldn’t you say?

And speaking of accidents… never leave the scene of one

Here, it must be said, moviedom’s track record is pitiful. Not only do film drivers routinely leave accident scenes, they’ve been known to do so with the accident victim stuffed in the trunk or bleeding in the back seat (minus a seatbelt, naturally). No director is more apt to display how not to do this at home, folks, than Quentin Tarantino. His drivers keep driving after bouncing a body off the windshield (Reservoir Dogs), shooting a passenger in the face (Pulp Fiction), swerving and speeding as a stuntwoman clings for her life to the front windscreen (Grindhouse), transporting passengers both dead and alive in a car trunk (almost all Tarantino), etc. etc. In real life, people, you will go to jail for any and all of these.

Driving the wrong way on a divided road

…. will cost you three points off your licence. Only three, you ask? Absolutely! Go to town! Every action movie I can think of includes a scene where the hero or heroine drives against traffic. The musical effect of multiple car horns going the other way is as familiar to us fans as the overbuilt pecs of [insert name here]. Honestly, too many movies to mention. But just offhand, all the Bournes, many a Bond, and anything featuring The Rock.

The MTO is no fonder of this than street racing, and you face similar sanctions if caught. Since that terrifying 1970s classic, White Line Fever, movies have played fast and furious with this one. A faceless truck driver is presented as a heinous villain, but Jason Statham deliberately side-swiping another car as it flips and grinds to a spark-flying halt, or 007 callously nudging another car over a cliff (have you noticed, by the way, how often Bond chooses mountain roads with S-bends and cliff-hanger drops for his chases? Is he, perhaps, an auto-motivated serial killer?), is A-OK. And he has to be: otherwise the movie would take another hour at least while our hero checks his blind spot, signals lane-changes, and enters traffic at the correct speed. And really, driving too slow is just as dangerous as driving too fast. Ahem, Morgan Freeman in Driving Miss Daisy. Could you go any slower? Could the movie?

When selling or buying a used car, you must buy/receive a used vehicle information package

Gone in 60 Seconds, The Fast and the Furious, Drive… absolutely no one adheres to this. But it really would diminish our hero’s street cred, don’t you think, if when he was in the chop shop he insisted on seeing prior ownership papers? So it’s patch ’em up, soup ’em up, and go. The hotter the better. And as for insurance… pah! (For a more realistic portrayal of impulsive auto purchases, see Planes, Trains and Automobiles.)

Distracted Driving: A, B, and C

A: Animals should be in the back seat secured by way of crate or seat belt harness.

Hello, Melissa McCarthy, Bridesmaid extraordinaire, what the hell are all those dogs doing, running loose in the front and the back seats? Can’t you just smell a vehicular disaster? Who’ll be laughing when all the cute puppies go flying through the windshield after you drive into a ditch? Huh?

B: Stress can affect your driving performance

Well, duh. In the movies, however, no drive is unstressful. If you’re not involved in a high-speed car chase or dodging bullets, you’re most likely contravening the sage advice of the MTO below: 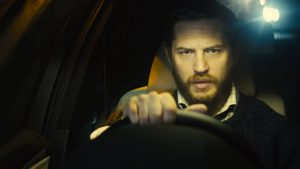 C: Do not engage in emotional or complex conversations while driving

Is there any other kind of conversation in the movies? The most extreme version in recent film history has to be Locke, featuring Tom Hardy. While alone in his car for the duration of the film, Hardy’s character conducts – according to my faithful Wikipedia – a total of thirty-six phone calls, during which he learns a pregnant one-night stand is going into premature labour, tries to supervise a complicated job at work, is fired from that job, confesses his infidelity to his wife, and is asked by his son to return home. Um…

By the way, I did a little research into how moviemakers shoot their driving scenes. Most have the car mounted on a low-riding trailer that’s driven by another car. Which is why they can mislead us by having all those stressful conversations without driving off the road (Locke, for example, was shot entirely on a trailer in real-time, except for bathroom breaks). But some directors find that this doesn’t provide enough verisimilitude, and like to have the actors drive for real. This is potentially more hazardous, not least, I’d suspect, to the film’s insurance costs, but for anything more demanding than basic driving there’s often a driver in back with another wheel to take control of the car when necessary. (Like the instructor’s panic brake you may recall from your own driving lessons). Then, of course, there are stunt drivers who do the actual dangerous driving for those Bond chases.

So should we ask our movies to feature car chases in which everyone signals lane changes and enters the highway at the appropriate speed? No more music from the wrong-way car horns? Will the cigarette-smoking villains start vaping at the wheel instead of firing up with the glorious sizzle of a (now mostly obsolete) car lighter? Let’s not. Law-abiding citizens need a break from reality sometimes. And what better way than to watch some pumped-up, fast-quipping actor break all the rules of the road while the biggest risk we face is a sodium overdose from our  jumbo-sized popcorn. (Which, by the way, is one bad habit I’m never giving up.)