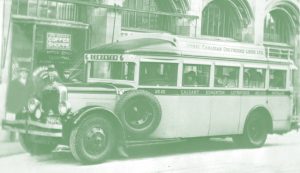 On July 9th, Greyhound sent an email to its customers announcing drastic service cuts: all routes in BC but one; all routes in Alberta; most routes in Manitoba. There would be fewer service cuts in Ontario and Quebec, but if you look at the list of routes in Ontario, there are already dozens of rural areas without reliable mass transportation.

The semi-private Saskatchewan Transit Service, once public, had stopped service. Atlantic Canada has limited private bus service. Greyhound claims these drastic cuts are happening because ridership is down 41 percent; that it is not economically feasible for the routes to continue.

No one is doubting (or has reason to doubt) Greyhound’s numbers, or that to travel across Canada is a difficult and costly proposition. It is often cheaper to fly from Vancouver to Reykjavik, or Toronto to Lisbon, than from Edmonton to Saint John’s. But flying only makes sense if you live in a major urban centre. Outside of Montreal, Toronto, or Vancouver—in small regional hubs, towns, or more rural locations, travel has become prohibitively expensive.

Never forgetting how remote and inaccessible much of the nation is, and also how regional it is, the question remains—how do you move across this country? Doing so is complex, and an ongoing problem of our Confederation. We often abandon necessary transportation when it becomes inconvenient or expensive. This is not just a neo-liberal problem, although it seems to have gotten worse after Mulroney’s market-based “solutions” of the late ’80s, like cutting VIA rail or privatizing Air Canada. But it is not just Greyhound that has cut service and abandoned travellers. Canadians have an ongoing crisis of infrastructure—there are construction gaps on major highways; the train to Churchill, Manitoba has been out of commission for almost two years; the fact that few VIA routes exist outside of the Montreal-Toronto-Ottawa corridor; how, in Southern Ontario, Metrolinx trains don’t run regularly between St. Catharines or Guelph, or between Hamilton and Niagara.

Transportation has always been dependent on factors of economic convenience, meaning that those considered to have no economic value have tended to fall by the wayside.
There’s a myth, promoted by those like the late Pierre Berton, that the train was intended as Canada’s great unifying project. And yet historian Harold Innis noted that transportation in Canada was never connected to passenger routes. That the myth was built over an ongoing crisis of of raw goods being moved from resource-bearing regions to population centres. Although Innis was writing about the fur trade, ignoring people in favour of goods has a long history in our country. For example, the building of the TransCanada Highway meant that passenger trains were replaced with transport trucking that had replaced smaller regional routes that were previously trod by horses or traversed by canoe. The market, in other words, has often determined the nature of our transportation.

It is also important to remember that Canada has always been a colonial space—intended as a way of shipping resources back to England or France. Transportation was less for the good of people and more for the good of trade routes and commerce. The most accurate image of Canadian transportation is one of fur bundles moving from processing points in towns near Hudson’s Bay (like Moose Factory), through to places that graded and bundled them, to markets on the St. Lawrence.

Transportation has always been dependent on factors of economic convenience, meaning that those considered to have no economic value have tended to fall by the wayside. It also means that capitalist models tend to be explicitly racist. This is upheld by the long history of Canadian policy. It can be seen in how we import labour, but do not provide a means for those labourers to form communities. I’m thinking here of all of the Chinese and Indian workers who died building infrastructure for white communities that they were not allowed to participate in.

But I’m also thinking of other, more recent examples—of Filipino nannies, nurses, and personal-care workers who are encouraged to settle in communities with labour shortages. These workers often have no resources; if they cannot drive or have no access to a vehicle, they are forced into further isolation. Until now, Greyhound provided cheap and reliable transportation for these people and for personal, non-corporate goods (it being easier to ship a few boxes of household matters by bus than FedEx), neither of which are considered viable anymore.

These were almost accidents of geography—racist policy as an after-effect of late capitalism, but there are more explicit examples. Indigenous people spent most of the twentieth century being forcibly resettled, often far from their ancestral homelands or forced into genocidal residential schools. They had their children ripped from them, something that still occurs, in different form, via the current child-welfare system. To be Indigenous in Canada is to be forced from one’s space, and, often, to never have the resources to return.

Greyhound coaches have frequently been the only way poor, isolated people could travel hundreds of miles to see family, to go to school, to find employment, or even to go to the doctor. To access the latter, many reservations have been compelled to purchase vans or buses. In Northern Saskatchewan, however, many rural people do not have this option. Imagine living somewhere near Prince Albert and having the only cancer specialist be in Saskatoon; think about living somewhere near Spanish River, in Northern Ontario, with the closest college or university classes being in Thunder Bay or North Bay, hundreds of miles away. Think of the dozens of women who were raped and murdered on the Highway of Tears in Northern British Columbia. There were not enough buses, and the buses were too expensive. The buses were cut, and the state argued with private companies about money. The result of both this lack of resources, and the arguing, was dozens of Indigenous women killed or raped.

I was going to end this piece with the argument that transportation, in a country this wide and diverse, should be considered a utility in the same way high-speed internet was recently deemed necessary for economic survival in rural and remote communities. I still think this is true, but thinking of the remote and largely Indigenous communities spread throughout our country that do not have adequate housing, heat in the winter, safe drinking water, or good schools—all of which speak to how we do (or not) spend our infrastructure money—it’s hard for me to imagine that a socialized transportation system would ever work.