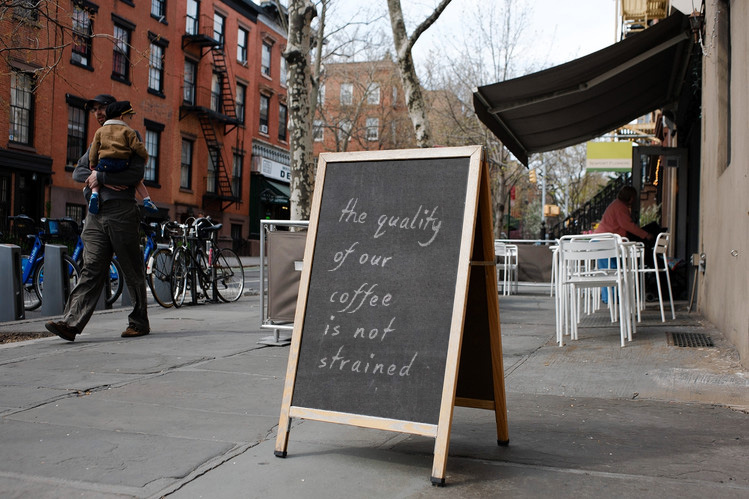 The above line was recently used in an ad campaign by Cadillac, a company, as I’m sure you know, devoted to failure if it be the price of originality. Tell me another one, you say. And so I shall. It’s easy enough to spot the Cadillac fallacy (now there’s a name for a car: Fallacy), which is merely one of the more nakedly cynical examples of what I’ve come to think of as crypt-looting, the literary equivalent of splicing in footage of dead movie stars to lend glamour, gravitas, or what have you, to a commercial project.

Like Cadillac, though arguably more well-meaning, almost every hip coffee shop in downtown Toronto (and, no doubt, Vancouver, Calgary, Prague) seems to have turned to literary and philosophical quotes to promote its wares and enhance your day. You know this scene, I’m sure: a sandwich board with today’s dictum chalked in rainbow colours alongside a plug for Pumpkin Spice Latte™ or Fresh-Squeezed Lemonade, depending on the season. Here’s one from my local java joint, seen in spring 2015: Because things are the way they are, things will not stay the way they are (Bertolt Brecht).

If “the way things are” is the plundering of literature and its neighbours for marketing purposes, then they will most definitely stay that way for the foreseeable future. I imagine the chore of hitting the internet for today’s quote as just one of several items on a barista’s checklist, besides stacking cups and grinding espresso. Or perhaps it’s a sought-after task. If words are currency, after all, there are multiple possibilities, such as admiration from your cute co-worker: Elmore Leonard! Cool choice, Justin. At the boutique coffee shop near my sister’s place in the east end of Toronto, David Foster Wallace, Emily Dickinson, Mark Twain (a common source, highly quotable), Elmore Leonard (see above), Ralph Ellison, and the Dalai Lama have all been pressed into service. And those are just a few I can remember offhand. Pick the writer or cultural figure you can least imagine shilling overpriced coffee, and he or she will have shown up outside this particular coffee shop. (The Dalai Lama seems to be a natural for aphoristic marketing clichés, but maybe that’s a Buddhist thing, and at least he’s alive: In order to carry a positive action, we must develop a positive vision!)

It’s no surprise, with our all-powerful search engines, that the ready availability of meaningful quotations should appeal to industrial giants and hip artisanal entrepreneurs alike. But context is everything, right? To return to Cadillac, sorry, I mean Herman Melville, our author died very much on the downside of the fame he’d acquired early in his literary career, innocent of how posterity would value (and profit from) his work. The human cost of originality, for him, was high. Who knows, maybe these words on the subject were his way of explaining to his wife why they couldn’t make that month’s rent. Except that rather than aphorisms, his thoughts on failure and originality were part of a longer, deeper conversation; one that he was presumably engaged in his whole creative life. Like his fellow scribe Victor Hugo, posthumously roped in to sell units for a condo development in Abbotsford, BC — there is nothing like a dream to create the future — it’s unlikely that Melville’s dreams encompassed anything like his future as it exists on brainyquote.com. 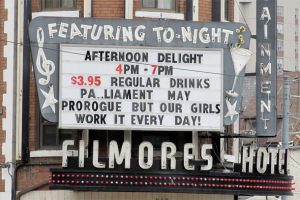 If you’re looking for a pithy quote that carries less weighty baggage, you could do worse than the marquee of Filmores, a Toronto strip club that has outlasted most of its competitors. Someone there prefers a pop culture mash-up to highbrow plunder: Spring Has Sprung, the Heat is On, Come See Our Dancers Wear a Thong. And, during one of many teachers’ strikes, the entirely original but more dubious: The Teachers Aren’t Working But Our Schoolgirls Are. Depending on your inclination you may find this disturbing, titillating, or just plain goofy; still, overt in intention and low on pretension, isn’t it less dispiriting than recycled lit?

Like everyone else, I’ll occasionally succumb to an apt quote. Early one day this past winter, passing the coffee shop/word emporium, I saw this, attributed to Plato: Everyone you meet is fighting a great battle: be kind. (Stay Warm With One of Our Delicious Hot Drinks). Perhaps a little fragile that morning, I did, momentarily, experience a swell of warmth, like a sip of hot coffee on its way down. Yes, I thought. Why not? Let’s all be kind. (Though Plato is probably not the source for this quote.)

Engaged as we all undoubtedly are in life’s struggle, and headed towards the same outcome one way or another, there are surely some for whom the battle is greater, who deserve a little extra kindness. Herman Melville and his literary legacy, say. Since that’s wishful thinking, I leave you with this, seen outside the self-same coffee shop just a few weeks ago: When you arise each day think of what a privilege it is to be alive (Marcus Aurelius). Or, if you prefer, as the Bard of Filmore’s might put it: Life is Short/Girls Are Sweet/Cut Loose and Enjoy the Heat.