By Emily Donaldson on June 12, 2018 The Dusty Bookcase 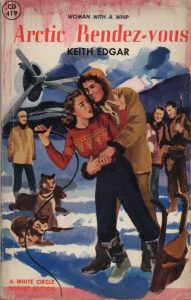 Nearly everything I know about Keith Edgar is in these four sentences in Greg Gatenby’s Toronto: A Literary Guide (Toronto: McArthur, 1999):

301 Indian Grove was the home in 1950 of the mystery writer Keith Edgar, whose life is something of a mystery. He published at least four novels in the genre (I Hate You to Death, 1944) and 21 of his short stories appeared in the Star Weekly alone between 1943-52, probably a record for that journal. He edited an aviation magazine, which is ironic because the only newspaper reference I could find for him reported his crash-landing a small plane in Brockville in 1946, with the loss of only his two front teeth (and his plane, of course). The article mentions that his wife, who fractured her elbow in the crash, was a writer as well, but where and when they were born — or died — is unknown.

You can sense Gatenby’s frustration. Information on Edgar is scarce. And I can’t add much more, other than what I believe to be a complete list of his titles:

The Case of the Incendiary Blonde (Toronto: National, 1945)

Arctic Rendez-vous is my second Edgar. I read the first, I Hate You to Death, because I loved its setup: seven writers confront their hated publisher in a hotel room. He’s murdered. Whodunit?

That, and I really liked the cover: 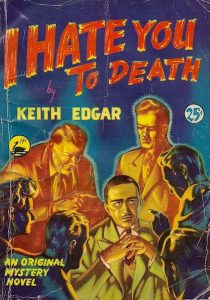 I don’t like the cover of Arctic Rendez-vous nearly as much, though “WOMAN WITH A WHIP” does catch the eye.

Its hero, pilot Taffy Calhoun — so named for the colour of his hair — is the sort of good natured fella commonly found in post-war Canadian pulps. At some point during the war, Taffy flew an RCAF mission over the Arctic “in search of scientific data.” He happened to spot a ship in a narrow inlet and recognized it immediately — don’t ask how — as the Unaikto, a thirteen-hundred-ton fur-trading steamer that had been abandoned in 1931 after becoming icebound. At that time, it was assumed she’d be crushed, and would come to rest on the ocean floor near “the oaken bones of Franklin’s ‘Erebus’ and ‘Terror’ lost in the same locality,” but the next year, the Unaikto was spotted by a trapper. The year after that, she was seen drifting past King William Island. And so one and so on. Randy Taffy brags about his sighting, the first in many years, in trying to bed some babe at the Royal York Hotel.

The babe blabs and our hero is summoned to the airline’s head office, where he meets Chairman of the Board Murdoch Ritchie and his beautiful, impeccably dressed daughter Marta. Taffy is told they want him to pilot a plane to the ship to salvage its cargo. Because he’s no fool, our hero holds out for more than his weekly pay. As part of the negotiation, Marta invites Taffy to the tasteful Ritchie mansion where, in white silk gown and tiara, she seduces the flyboy whilst playing Debussy with “clever fingers.” Her efforts have the desired effect:

Gently, he tilted back her chin and looked down into those brooding dark eyes. He murmured, “Fate is a funny thing — I’ve known you how long? A few hours? And yet since you were born you have been my woman, waiting for me to come into your life. I can feel it deep inside. You are my woman. Mine.”

She trembled in his arms and twisted to bury her face in his shoulder, moaning softly. He slid his hands up her shoulders, pressing her to him until the hard cones of her breasts started a vein throbbing in his throat. She trembled again and the perfume her body’s heady incense which engulfed his reasoning demanded that the twain should become one.

Hard-coned Marta then breaks the mood by asking Taffy whether he’ll accept “Daddy’s offer” of a fifteen-percent cut on the salvage of the Unaikto.

Taffy removes her clever fingers, places them on her lap, and grabs his coat.

Cover copy describes Arctic Rendez-vous as “the story of a man and woman, savage and elemental, matching their hatred and a strange attraction in a race for a guilty sunken fortune.” Theirs is indeed a strange attraction, expressed in threats of discipline and physical violence. Would that they had happened more often, but Taffy and Marta remain apart with no contact for most of the novel.

The morning after the evening of heady incense and engulfed reasoning, Taffy secures an investor to fund his own expedition. He purchases a Norseman — aviation buffs take note — and sets off in search of the Unaikto with mechanic/alcoholic Romeo Flambeau. Marta follows with a crew and dog team in a much larger, well-stocked Douglas. Curiously, it’s in this “race for a guilty sunken fortune” that everything slows. Lengthy descriptions of aircraft, their capabilities, and the ways they might be flown, are replaced by lengthy descriptions of  “Eskimos,” their capabilities, and the ways they might be exploited.

As might be expected, the savage, elemental man and woman eventually become one, Marta having brought a sleeping bag wholly inappropriate for the arctic. Her request to share Taffy’s results in what might be the spiciest passage in any post-war Canadian pulp:

Taffy’s first coherent reaction was tender pity. He worked both arms around her and pulled the girl tight against him, feeling the soft firmness of her breasts and the smooth curves of her thighs transmit their chill to his body.

The fragrance of her hair was in his nostrils and her gentle breath sent a warm zephyr against his chest.

She whispered shyly, “I don’t know what came over me, Taffy — I—”

Taffy said shakily, “I love you too, Marta, I always have.”

Marta was quiet for a moment, then she raised her head and kissed him on the mouth.

A vein was hammering in his temples and there was an uncomfortable warmth creeping through his thighs.

His mouth sought for and found her moist sweet lips and she pressed close to him. Taffy, Darling, I want you so much — so much —”

He slid his hands down her smooth back, the part of him that was still rational thinking that her body was suddenly hot, hot all over. He could hardly speak, his voice was so husky.

“I love you Marta, you know that don’t you?”

The pressure of her thighs against him was unbearable. His mouth groped with desperate hunger for her lips and together they sank down into a bottomless pool of warmth and breathless wonder.

In the eyes of the Eskimos, Marta becomes Taffy’s wife. Our hero envisions a wedding ceremony after they to Toronto. It’s a happy ending, I suppose, but the following made me concerned for our hero:

I would’ve considered all of these to be red flags, but then I’ve never been attracted to whip-wielding women