By Emily Donaldson on October 16, 2017 The Dusty Bookcase 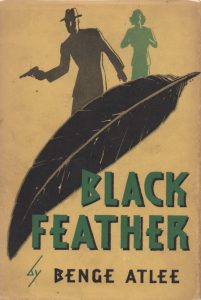 The weapons Britain is supplying to its Arab allies are somehow ending up in the hands of Eastern European fascists and the Foreign Office is not amused. One man, Gerald Burke, is called upon to put a stop to it. An Oxford-educated archeologist-turned-adventurer, Burke seems a good choice: he knows the region, has a good number of contacts, and hails from rural Nova Scotia (Chignecto, it is implied). What’s more, Burke comes with Abdula el Zoghri, a loyal manservant with a talent for getting out of tight spots.

After accepting the assignment, our hero returns to his Bloomsbury Square flat to find a warning in the form of a black feather, quill-upwards, protruding from the brass plaque bearing his name. The fact that they’re onto him doesn’t deter Burke from his mission. He makes for Marseilles, and is in the midst of booking passage to Salonika when a pretty Russian girl literally falls into his arms. Burke knows she’s a spy, Zoghri knows she’s a spy, and yet they’re happy to play along. Other characters soon enter the scene:

From small, almost feminine feet, the figure rose along sleek, billowing trousers to expand into a plump and jovial rotundity. The gentleman radiated buoyancy – élan vital. His raiment was flamboyant without being entirely inartistic. But it was the face that caught at one’s risibilities – a round face with two twinkling little eyes and the smile of a satyr.

This is our first glimpse of Dimitri Gombos, the pretty Russian girl’s boss. The novel’s early chapters are filled with light touches, verbal sparring, and good humour between adversaries:

“Once in Vienna I am almost killed by a bus.”

“I’m that way in Vienna, too… It’s something Vienna does to you – especially in the spring.”

She gave him a look of frank impish appraisal. “But you have not the look of that – of the romantic!“

“I’ll see a plastic surgeon about it in Salonika.”

Burke seems the right man for the job – but is he? The adventurer takes far too many chances, his inquisitiveness overriding not only sound judgment but the warnings of those who’ve saved his skin. As a result, he falls into the hands of the enemy on four occasions, and comes perilously close to losing his life in each one. This recklessness results in the deaths of two men, including the brilliant leader of the League for Peace, a clandestine, fascist-fighting organization. Burke blames himself, as well he should, and tells Zoghri:

“If I meet the man responsible for all this horror I think I could kill him willingly. That’s the trouble with murder – and war – they pile up further hatreds – other murders.” 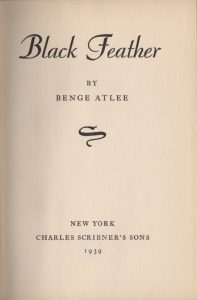 As genre dictates, Burke does eventually meet the man responsible for the horror, but by then all thoughts of murder have vanished. Our hero never takes a life and is increasingly haunted by the spectre of past conflicts. “Have you wondered, m’sieu, how many geniuses died unfulfilled in Europe during the years from 1914 to 1918?” asks a member of the League for Peace. “Who shall count them but God?”

And here it is worth noting that the author of this novel, a medical doctor, served in the Royal Army Medical Corps and was a recipient of the Military Cross.

“Our good Burke loses his sense of humour!” remarks Gombos as the climax approaches. Indeed he has, as has the novel itself. The pace has increased, things have become darker, more chaotic, and bodies are beginning to pile. With the end of his mission in sight, Burke walks through a small town on the Gulf of Cassandra:

It was a street of ghosts. Hadrian’s legions had pounded along these same cobbles, St. Paul’s weary sandals left leather on them, generations of exiles from the Spanish Inquisition failed to wear them down. Not long ago the camions of the Allied Army had rumbled over them: would rumble again if munitions kept coming in unimpeded through this Ægean port to bolster the privilege of greedy men.

With this focus on history and fascism, Atlee is attempting something unusual in Black Feather, and for most part he succeeds. The worst that can be said about the book is that it comes apart in the final chapters, as if mimicking the disorder and confusion surrounding Burke. It’s really a shame that Black Feather is an only novel. A physician, professor, and Chair of the Department of Obstetrics and Gynaecology at Dalhousie, Atlee’s only wrote two other books: Chronic Iliac Pain in Women (1954; rev 1966) and The Gist of Obstetrics (1957). Black Feather is, of course, something else altogether. A thriller—the dust jacket describes it as “an adventure story”—it fails as a work as escapist fiction, but this is the fault of history, and not the author. We know Burke’s actions mean little, and its happy ending is a temporary thing.

Black Feather was published in August of 1939, the week before Nazi Germany invaded Poland.