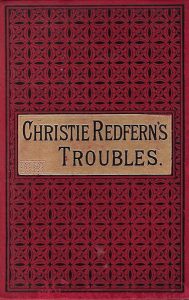 Christie Redfern’s troubles are so many that they spill over into her backstory. Poor girl, she began life as the fourth child of a Scottish businessman and his loving, fertile wife. Mrs Redfern died, but not before giving birth to four more children. The role of family matriarch was then taken up by Mr Redfern’s stern spinster-sister Elsie, but the latter’s firm yet helpful hand wasn’t enough to prevent the decline of Mr Redfern’s enterprise. What was that enterprise? Doesn’t matter. What’s important is that it failed, causing Mr Redfern to move the family to the New World: a farm in Canada West’s Glengarry County. That Mr Redfern knew little about agriculture suggests something about his failure as a businessman. To make matters worse:

Soon after their arrival in their new home, Aunt Elsie was seized with an illness which lingered long, and left her a cripple when it went away; and her temper was not of the kind which suffering and helplessness are said sometimes to improve. It was a trying time to all.

Christie is her aunt’s crutch; though a slight, sickly thing, it is she who’s been doing the heavy lifting maintaining the Redfern farmhouse. The reader catches up with Christie at age twelve, after she’s received a scolding for failing to attend to rising dough:

This was little Christie Redfern—just such a plain, common-looking child as one might see anywhere without turning to look again. Her eyes were neither black nor blue, but gray, and dark only when the long lashes shaded them. Her mouth was too wide to be pretty, and her lips were pale and thin. She might naturally have had a fair, soft skin; but it was tanned and freckled by exposure to the air and sun, and looked neither fair nor soft now. Her brow was high and broad, and would have been pretty but that she gathered it together in wrinkles when she looked at anything closely with her short-sighted eyes.

A “very queer-looking little creature” is Christie. Given to tears, she regularly cries herself to sleep, and weeps every dawn at the realization that she must meet the day without the love of her dear mother. I count sixteen bouts of sobbing in the novel’s first third. If not for the occasional visit home from her eldest sister—cheerful school-mistress Effie—to whom dearly departed Mrs Redfern entrusted Christie’s care—there’d be no joy at all in the pitiable girl’s life. Effie’s first visit has her presenting Christie with a Bible, though what the girl really wants is Jane Porter’s tale of adventure, murder, romance, and cross-dressing: The Scottish Chiefs (1810). The Bible is better, thinks Effie, and the travelling religious bookseller from whom she made the expensive purchase agrees.

Beautiful, healthy, happy, and most of all pious, Effie provides an exemplary role model. Christie tries to follow her sister’s example, but is frustrated in her efforts to share Effie’s Christian beliefs. To be fair, because Effie’s away teaching, she’s removed from the series of unfortunate events that challenge her sister’s faith. The first occurs when Mr Redfern stumbles over the farmhouse threshold, having suffered an injury that will render him an invalid. As if on cue, Aunt Elsie also takes a turn for the worse; suddenly bedridden, she leaves the young Redfern children to care for the adults, the farm, and one another. After a lengthy illness, during which he is nursed by Christie, Mr Redfern dies. It’s only after their father is gone that the children learn the family farm was purchased with Aunt Elsie’s money. And that it has a mortgage.

Yes, Christie Redfern has many troubles. They run from the first page to the last, and I aim to cover them all.

After the farm is sold, the remaining Redferns retreat to a dilapidated cabin. Aunt Elsie takes the loss on her investment and entrusts her depleted funds to a financier named Portman. Annie, who’s second only to Effie in age, accepts a position as a lady’s maid in Montreal. Christie is offered a position as a nursemaid by another family in the same city, but once there is rejected on account of her frailty. Through the kind efforts of one Mrs McIntyre, she manages to secure work with a third family named Lee. Mrs Lee has given birth to a weak baby, is weak herself, and requires a girl—no matter how weak—to take care of her four other children. Christie does her best, but young Harry Lee comes down with scarlet fever, likely brought home by Mr Lee after one of his many business trips. In the midst of all the drama, Christie, who’s still wrestling with her faith, ventures out to the local kirk, where she chances to hear a sermon, delivered by world-famous preacher “Mr G,” which changes her life. The nursemaid shares her own experience with Christ-curious Mrs Lee:

“He was telling us of God’s love to man, shown in many ways, but most and best of all in the work of redemption. It wasn’t new, what he said; and yet—I don’t know how it was—I seemed to see it as I never saw it before.”

Christie’s acceptance of Christ as her Lord, Saviour, and Friend comes not a moment too soon. Harry dies, and then the baby dies, and Mr Lee decides it best that the family leave Montreal to get some seaside air. Mrs Lee wants to bring Christie along, telling her husband that it will do their ailing nursemaid good, but Mr Lee doesn’t want the added expense. Unwanted, and very nearly spent, Christie is shipped off to Mrs Lee’s friend Mrs Seaton, whose little boy, Claude, had a fall and hasn’t been right since.

Now halfway through the novel, and roughly halfway through Christie’s troubles, the reader seems justified in questioning the purpose of so cruel a tale. The answer comes with the introduction of Claude’s pretty half-sister, Miss Gertrude. Roughly the same age as Christie, she’s intrigued by the dedicated, self-sacrificing, unhealthy nursemaid. When Christie shares her story, detailing the troubles she’s seen, her Creator—by which I mean Margaret Murray Robertson—reveals her purpose:

It is just possible that the young lady, who sat listening so quietly to these simple details, took to herself the lesson which the story was so well calculated to teach.

That lesson comes from a nineteenth-century Congregationalist clergyman. Margaret Murray Robertson—whose father was just such a man—launches Miss Gertrude on her own spiritual journey in a conversation that consumes much of a chapter titled “The Secret of Peace.” The whole thing can be boiled down to this exchange:

“Do you mean that you are so satisfied with your lot that you would not have it different if your wish could change it?” asked Miss Gertrude, in some surprise.

“I mean that I don’t know what is best for me or for those I love, and He who has appointed our lot does; and so all things are best as they are.”

Sadly, things change. Christie learns that Mr Portman was a charlatan who absconded with Aunt Elsie’s money, but a greater revelation comes in the nineteenth of the novel’s twenty-three chapters when Effie, whom Christie hasn’t seen in the two years since she left the cramped Redfern cabin, makes an inexplicably brief visit to the Seaton’s massive Montreal mansion:

“Are you lame still, Christie? I thought you were better of that.”

“Oh, it is nothing, Effie. It is not the old lameness that used to trouble me. I fell on the stairs the other day, and hurt my knee a little, that is all. It is almost well now.”

To this point, the author has made much of Christie’s infirmities, but has never once mentioned lameness. The knee continues to bother, but Christie presses on, hobbling upstairs, downstairs, and to the attic nursery to care for Claude, until one morning she finds herself unable to get out of bed. A doctor is summoned, and the young nursemaid removed to hospital. Once there, she provides comfort to others through acts of kindness like writing letters, reading chapters from the Bible, and speaking “a word in season to the weary.” Tragically, what’s described vaguely as “the disease in her limb,” progresses. After five months of hospital care, in a chapter titled “The Night Grows Darker,” Christie’s leg is amputated.

The operation does not have the desired effect:

Was it any wonder that many a time her pillow was wet with tears? She tried not to murmur. The nurse and the doctors, too, thought her very patient and quiet, and praised and encouraged her, telling her their hopes that her suffering would not last much longer. But still she grew weaker every day, far weaker than she knew, for she could not try her strength now by walking in the hall or climbing the broad stairs that led to the wards. Yes, she grew weaker.

Christie endures several more months of suffering before dying in her hospital bed. The novel’s final paragraph informs that Claude, too, has died and that he and his nursemaid are together in heaven—where, I expect, she cares for him still.