I grew up in a suburb of Toronto, during the 1980s, which is to say, Before Internet. What it meant to be a writer was mostly limited to what the television had to say on the matter. Kathleen Turner’s pulp novelist, in Romancing the Stone, offered one example – but Turner is already famous and bestselling when the movie begins. How had she become bestselling? The TV was mute; Turner’s artistic development – her Bildungsroman – wasn’t pertinent to the plot.

My house was a twenty-minute walk from the subway that might’ve taken me someplace else – a bookstore stocked with Paris Reviews, say. But Kipling Station marked the furthest west stop on the line. And anyway, subways were for Saturdays with the family. The local mall grudgingly kept a Coles, stocked with calendars, Dean Koontz, and the rack of comic books in the basement, which squeaked when turned.

When it came to accounts of the writing life, I had to content myself with Roald Dahl’s essay, “Lucky Break – How I Became a Writer,” which you stumbled on towards the end of his short story collection, The Wonderful Story of Henry Sugar and Six More. The essay was meant to introduce Dahl’s first published story, about his time as a pilot with the RAF. I suspect many kids simply passed over the essay, the better to get to fighter planes. But I must’ve reread it a dozen times. 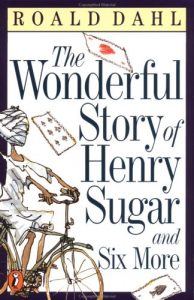 And yet I didn’t remember much about the essay when I revisited it recently, for the first time in something like twenty years. I did recall the “lucky break” of the title: the famous writer C. S. Forester has sought out the young Dahl, who has only lately returned from World War Two. Up to this point, Dahl hasn’t published anything – has had, if we’re to believe him, “no thoughts of becoming a writer.” Forester, for his part, is after fodder; he’s looking to convert somebody’s war-time experience into magazine content. The two have lunch, and Dahl, bored with his job at Washington’s British Embassy, agrees to help. He goes home, jots down some memories, sends them off, and promptly forgets about the ask. But when Forester gets back to him by letter, Dahl discovers the material he supplied the famous writer was no good, which is to say too good. “You were meant to give me notes,” writes Forester, “not a finished story. I’m bowled over. Your piece is marvelous. It is the work of a gifted writer. I didn’t touch a word of it.” Forester has already forwarded Dahl’s piece along to an agent who, in turn, has already placed it with the Saturday Evening Post. The check, minus commission, is enclosed. “Did you know you were a writer?” Forester asks.

I still buy Dahl’s account of how he stumbled into writing. But I’m not sure I ever bought his innocence, his obliviousness. Years after I first read “Lucky Break,” my first publisher would tell me – would tell anyone who would listen – that one has to allow oneself to be lucky. (This was the son of Morley Callaghan, who knows from lucky breaks; he lives in a house in Rosedale, one of Toronto’s most affluent neighbourhoods.) Even as a kid, I sensed that the young Dahl had sensed an opportunity. “Just for fun, when it was finished, I gave it a title,” he says of the “notes” he whipped up for Forester. “I called it ‘A Piece of Cake.’” Dahl was clearly adding some icing.

I don’t doubt that Dahl wasn’t aggressively pursuing a writing career, if only because I can relate: my first published poems were passed along by a teacher of mine to a magazine without my knowing it – a lucky break of more modest proportions. Plus, I too have been slightly blasé about my “career,” such as it is, only to be kick-started by the kindness of editors. I have depended on the unprompted encouragement of others: an e-mail out of the blue, say, from an editor. Indeed, I might have forgotten about Dahl’s essay if Kim Jernigan hadn’t written, with a gig. Even then, I nearly backed out. Revisit a book from my youth and record something about the trip, about who I’d been, how far I’d come? As commissions go, here was catnip in a poisoned chalice. A writer will prefer himself to most other subject matter, even if he knows almost nothing about himself. (It’s usually to his advantage to beg off the autobiography.) Still, if I internalized anything from Dahl’s essay, I would like to think it was the Englishman’s strange, seemingly incongruous mix of ambition and ambivalence.

Other parts of the essay I had forgotten? Dahl’s banal bullet-list of a writer’s must-haves (“You should have a lively imagination,” “You must have stamina”), and his description of his notebook, which I used to marvel at. Here was the Ur-text in which Dahl had trapped the fleeting, one-to-two sentence ideas for his books and stories, which might have disappeared altogether had he not pinned them to a page. Ideas for books and stories did that, apparently – they sprang away. You might even have to pull over to the side of the road, produce a fingertip, and record an idea in the dust on your car, as Dahl tells us he once did.

Is it cruelly redundant to describe the attitude of a children’s author towards his precious ideas as, well, precious? To be sure, Dahl’s books do well; in other words, he was likely preserving gold in that dust. Still, it now seems to me that writers – whether of stories, poems, or essays – ought to learn to be careless with ideas, and that ideas, if they’re any good, had better learn to survive in writer’s minds, at least for the length of a road trip. And anyway, ideas are what amateurs have. They get turned into patents and Internet start-ups. Writers are in the business of bottling good sentences, one at a time.

If Dahl’s essay has a precious commodity, in the sense of something rare and valuable, it’s of mid-century vintage: a matter-of-factness that my generation would mistake for cynicism, maybe even elitism. “You should be able to write well,” he observes at one point. “By that I mean you should be able to make a scene come alive in the reader’s mind. Not everybody has this ability. It is a gift, and you either have it or you don’t.” This wouldn’t have struck me as extraordinary when I first read it, as a kid. Nowadays, it’s hard to imagine a writer of Dahl’s stature – especially one whose business is the delicate matter of sparking the tinder of adolescent imaginations – suggesting in print that talent isn’t distributed equitably. Moreover, his practical suggestion, that writers need day jobs to subsidize their work, predates the epoch of writers’ colonies, government grants, and entitlement. But then even Forester’s question – “Did you know you were a writer?” – would be unheard of today. No one accidentally discovers that they’re a writer anymore; they simply decide they are a writer, and then invite you to their book launch.

Any meathead with a graduate degree could make meat pie out of the Englishman who wrote “Lucky Break”; they would point out that Dahl (white, straight, male, and privileged) had the luxury to let lucky breaks happen. Fair enough. But we deconstruct Dahl at our own peril. In an age of relentless self-promotion and brand-building, the narrator of “Lucky Break” offers an almost-alien alternative to what it means to be a writer: secretly hungry, but outwardly modest, quietly ambitious, but deferent to authority (the authority of good editors and good fortune). He cheerfully offers up an unrepeatable path to publication, and it’s his cheerful hopelessness, or studied haplessness, that’s worth cherishing.