By Emily Donaldson on November 4, 2022 Essays 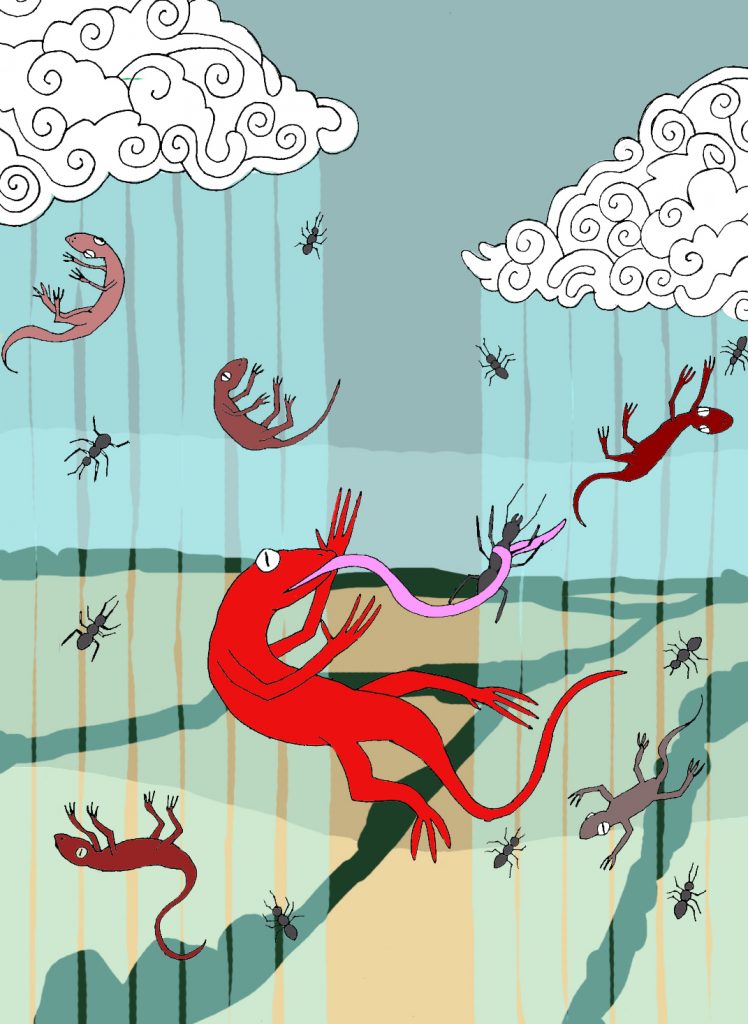 “There are more things in heaven and earth, Horatio, than are dreamt of in your philosophy.”
—Shakespeare, Hamlet

If you think Canadian life in general, and the weather in particular, have become like Alice’s Wonderland, curiouser and curiouser, these select items from early newspapers and journals should serve to disabuse.

On November 9, 1819, black rain fell over Central Canada, causing “profound darkness.” A storm on February 24, 1868, dropped not only snow but “vegetable matter far advanced in decomposition” over London, Ontario. After a storm hit Pontiac, Quebec, on July 11, 1864, “a respectable farmer of undoubted veracity” found a two-inch diameter piece of ice containing a small green frog.

Lizards crashed from the sky upon Montreal on December 28, 1857. Manitoba was engulfed by falling giant ants in June, 1895. What looked like “a vast vaporous cow” over Cobourg, Ontario, discharged enough water to cause rivers to flood and break all dams between the town and Lake Ontario. Compared to these exotica, the meteorite falling near Lachine, Quebec, on July 7, 1883, and the Alberta earthquake of April 18, 1906, are positively mundane.

Other phenomena caused less damaging mystery; for example, the “large pear-shaped object” visible in the sky for six minutes reported on August 11, 1898, in the Canadian Weather Review by meteorologist F F Payne. The unexplained balloon observed by two women over the Horse-Fly Hydraulic Ming Camp in Caribou, BC, in the summer of 1897, was equally innocuous. So were the thirty or so “large luminous objects” described by a Professor Chant to the Royal Astronomical Society of Canada at a meeting in November 1913 as “like an aerial fleet manoeuvering after rigid drilling.”

Earlier that year the same Professor Chant had announced to the same body a long line of lighted objects passing over Toronto on February 9; cognate reports put them from Saskatchewan to Bermuda. Not to be outdone, the next day’s Toronto Daily Star reported dark objects over that city the same afternoon.

Excitement was not confined to the heavens. On May 25, 1889, Toronto and Quebec newspapers mentioned “the birth of two unusually large lambs with calf’s hair on their breasts” on John Carter’s South Simcoe farm—there’s one for All Creatures Great and Small. Two denizens of East Kent, Ontario, heard a loud bang and saw stones shooting upwards from a field in July 1880. On September 9, the same year, Toronto and Halifax newspapers reported spontaneous shattering of windows and heavy falls of water inside Mr Manser’s farmhouse at Wellesley, Ontario. Other such glass explosions, this time accompanied by many inexplicable fires, aerial fleet manoeuvering after rigid drilling.” Earlier that year the same Professor Chant had announced to the same body a long line of lighted objects occurred November–December 1889 on George Dagg’s farm at Clarendon, Quebec.

But these do not compete with the previous outbreaks, in October 1880, at local hot spot the Hudson Hotel on the Ottawa River, which were attended by spontaneous movements of furniture—“the beds were especially excitable”—and a rather irreverent, smouldering stable, which, upon being sprinkled with holy water by a hastily imported priest, promptly burned down.