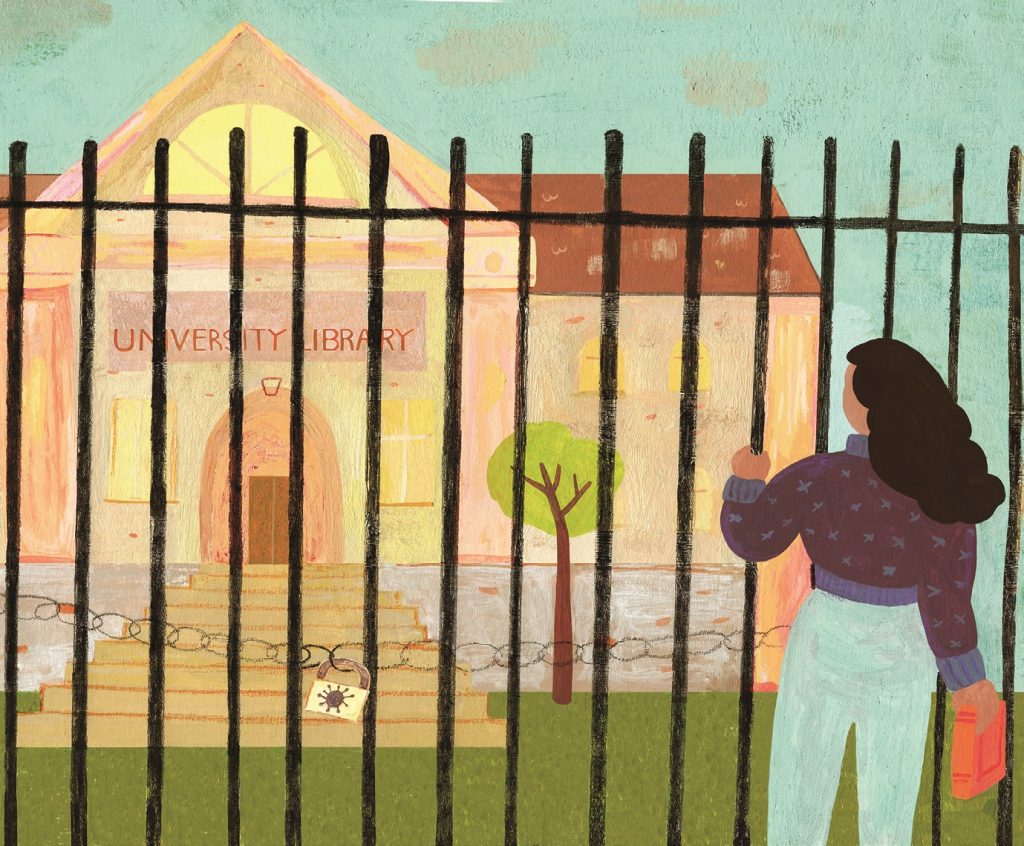 When the COVID-19 pandemic forced Canadian universities to go into lockdown last year, their libraries remained accessible to current students, faculty, and administrative staff—but not to the public. While ostensibly only a temporary measure, the move to cut the general public’s use of publicly funded collective resources should be viewed warily. Public access to university library collections has been tolerated by universities in the past, but it is not a certainty that it will continue. Although they rely on public funding, universities are private spaces, so access to university libraries has sometimes been provided as a courtesy, but it is not a right.

University administrators and faculty routinely affirm commitments and pay lip-service to diversity and inclusion even as policies about public use of university resources gradually become more exclusionary. McMaster University is planning to further restrict public access once campuses open again for in-person classes. Administrators at the university’s libraries have also declined to partner with Hamilton Public Library to expand community access. There was no access to McMaster Libraries collections through the public library system during the many months of the pandemic lockdown.

Lack of public access to university libraries should matter to all Canadians because independent researchers aren’t just amateur hobbyists. Researchers, teachers, writers, artists, documentary filmmakers, and activists all make vibrant contributions to Canadian culture and society; in part, because of public access granted by university libraries. For my grandfather, a poet and intellectual with only a high-school education who worked as a freelance journalist for over fifty years, research libraries were fundamental to his writing practice. Access to university library collections made his life richer and inspired an eclectic career. He authored several works of fiction and historical non-fiction and wrote an opera that was performed at the Shaw Festival. He was eccentric, intrepid, and endlessly curious. To record an interview with Carl Jung, he biked up a mountain in Austria with a large battery and recording equipment strapped to the back of his bicycle because Jung had no electricity at that time. Grandfather visited the libraries at the University of Toronto most of his life. When he died, he bequeathed an endowment to the university in thanks.

Another writer I know says he couldn’t possibly have conducted research for the documentaries he created for PBS and the CBC without access to a university library. Due to the new restrictions, though, he was recently unable to borrow books at the University of Toronto’s Robarts Library, where he pays an annual fee for alumni borrowing privileges. Considered one of best research libraries in the world, Robarts was originally designed to be used solely by faculty and graduate students. Following a 1971 “sit-in” organized by undergraduate students and subsequent media and public pressure, however, the university amended this policy, and, until this past year, has offered limited access to undergraduate students, residents of Toronto, and alumni. The right to use the library was fought for and won. It is moving to imagine these student activists sitting in the library, their bodies taking up physical space to show how much they valued it.

Digital resources and collections are replacing many of the physical books and materials in university libraries, and this has gradually meant less public access as well. In recent years, an increase in digital library holdings has contributed to a paradox: though libraries now offer more digital than print journals to their university communities, they do not “own” these resources and thus cannot share them as public goods. Even before the COVID-19 pandemic, alumni and residents of Ontario municipalities where universities are located were prohibited from having digital access to some university libraries. The patchwork of institutional policies surrounding public library use, which are determined by each university, has been shaped over time by the particular relationships universities have cultivated with the towns and cities that surround their campuses. Some universities have maintained strict barriers to public access, while others have allowed the public more freedom to borrow from their collections. At some university libraries, those with alumni accounts, and residents who pay annually for a library card, have been able to borrow books and access various digital collections via host computers. As buildings closed, and universities swiftly transitioned to online learning during the first stages of lockdown, however, all public access was put on hold. At first, this was only a temporary inconvenience—universities adapting quickly to a challenging situation. But when in-person pick-up and holds were allowed again months later, alumni and the public were still denied use of these services.

Last summer I was doing research for a book chapter I had made a commitment to complete by the fall. Despite being an alumna, I was not allowed to access digital collections at Western and McMaster universities unless I was physically in the library. In an effort to find out more about this, and about whether the university would be offering access soon, I contacted a few university librarians through the online chat service that all Ontario universities provide to patrons. Protocols to verify “my status” were necessary before beginning these conversations. Was I a current student, faculty, staff, or alumna? The librarians were kind, but there was no solution provided or suggestion that the public should have even temporary, limited online access to digital collections. I was instead cheerily given a link through which I could access the meager expansion (not useful to my research) to online resources provided to alumni, though not to the general public. Or maybe, they suggested, I could use the Internet Archive, which has a large collection of digital books? This was perplexing. McMaster and Western universities’ online collections are strictly cordoned off from public use, but I was told that my specific research needs could be met through Google Scholar. In an email exchange with one library administrator, it was made clear to me that when physical access to collections resumes, public access would be more limited than before: “members of the public will be granted access to electronic resources but only two to three times a month—our license agreements limit access to our current community only; current copyright court rulings require us to ensure we abide by our agreements; the current university community pays into our resources while broader community members do not,” he wrote. I found the repetition of the word “current” troubling. What about my grandfather, who gave back more than he ever took? People can contribute important insights and ideas at all stages of their lives. Public institutions aren’t only funded by the “current community.” Other library administrators I spoke to also confirmed that when physical access to library buildings or pick-up service is available again, the public will not be able to use the libraries as they did before.

Curious about the inflexible rules surrounding digital access, I contacted more librarians. The story they repeatedly told conveyed a sense of powerlessness that I found a bit disturbing. To hear these librarians tell it, university libraries are at the mercy of large companies that digitally distribute academic publications, which accounts for the diminishing lack of public access. I was told that, in the future, university libraries might have to adhere to increasingly strict leasing and licensing agreements. Similar to constraints outlined in the terms and conditions of an Apple Music subscription, libraries are limited in how they can use and disseminate the materials they “lease.” It’s a sad irony indeed that the corporations that wield the power to distribute digital content to academic institutions make a profit from publicly funded research outputs: the free articles authored by university professors, the free peer-reviews conducted by salaried academics employed by universities. The content produced from this labour is then leased to the institutions, which are charged high fees for the privilege of using it. Subscriptions to some of the more reputable academic e-journals cost university libraries $40,000 a year. When I asked about this exorbitant cost, librarians told me that libraries often have difficulty negotiating the terms of agreements allowing for public access. This lack of negotiating power is also problematic in terms of fostering a scholars-only research community free from influence. If corporations dictate the use and dissemination of library resources, then academic freedom is also lessened.

It may be difficult to measure, but there is also a cost to denying writers, independent researchers, artists, activists, and other citizens the ability to browse academic publications that are prohibitively expensive to purchase and that, in pre-pandemic times, took several weeks to access through public library systems. Closing the virtual gates to these libraries for over a year is indicative of a corporate ethos infiltrating university policy. Those who are directly paying for and are being paid by the university are allowed in, but new rules exclude the public. As tenure-track positions in universities are increasingly replaced by the exploitive hiring of part-time teachers on precarious contracts, many researchers are no longer employed full-time by universities. This means that they are not able to use the libraries during periods of intermittent unemployment. Cutting this access stifles intellectual curiosity, informed debate, and keeps private knowledge that should be shared.

The COVID-19 pandemic has revealed some serious institutional inequalities in Canada, including in law enforcement and elder care. In contrast to these problems, lack of library access for independent research might seem trivial. However, refusing to recognize the public’s right to access these library collections speaks to the ongoing privatization of universities: institutions founded on democratic principles. While it is obvious that physical access to the library had to be limited during the pandemic to ensure the health and safely of all, digital access should still be available to citizens. Also, there is no good reason that my friend can’t check out that book from Robarts Library. If physical pick-up is available to faculty, staff, and current students, alumni and resident card holders should be able to borrow books as well. The fall of 2020 saw a surge of online university enrollment, but the decision to block public access has made our collective commons much smaller. New initiatives are needed both to provide universities with ways to negotiate for control over their leasing agreements and to open the gates for activists, artists, inventors, and dreamers who contribute so much to Canadian arts and culture.

Jennifer Hambleton is an educator, researcher, and stagecraft technician.