A seasoned literary critic, André Forget recently made his literary fiction debut with In the City of Pigs (Dundurn Press), a novel about the art world’s intersections with the capitalist machinery governing modern life. Its protagonist, Alexander Otkazov, is a failed musician who finds himself reporting on the leisured classes in his capacity as a music journalist; through a series of personal investigations into his relationships with impresarios and real estate moguls, Otkazov must decide if he can be spared the final reckoning of moral accountability. 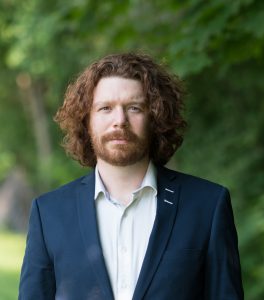 Jean Marc Ah-Sen: In the City of Pigs is broken up into four sections, not unlike the four movements of a symphony. What were the advantages of using a quadripartite framework in presenting Alexander’s explorations of the world of old money?

André Forget: Each part deals with an artistic conundrum, and touches on some aspect of Alexander’s personal life. In the first and final parts, it’s a lover who draws him in, but in the middle sections, he has encounters with composers who force him to think about his failures as a musician. If this structure works, I think it’s because it mimics something in life; the sense one has of certain themes and motifs repeating. Alexander likes avant-garde composers like Arnold Schoenberg, Aram Khachaturian, and György Ligeti—music that’s trying to escape traditional forms. The novel engages with the extent one can escape the nightmare of history. It starts with Alexander trying to leave his past, and many of the people he meets are obsessed with this idea of making radical breaks of their own. But there is a lingering sense that this may not be possible, that the patterns that have shaped their lives and histories live within them in frightening ways.

The book features the absurdist concept of hydroörganonology, a fictional study of underwater organs built into ocean beds and played to audiences donning scuba-wear. What impulse made you want to develop this piece, originally titled “The Lower Registers,” into a novel-length work?

I wrote “The Lower Registers” at the request of Earth World Collaborative, a Montreal-based arts group run by the composers Joel Peters and Adrian Foster. Joel asked if I’d be interested in writing about an underwater organ; I had just spent four years exhausting myself on a dead-end manuscript, so I thought, “why not write about this?” As sometimes happens in these writer’s block situations, the dam broke and the story came pouring out. I soon realized that Alexander’s questions about music, architecture, and capitalism tapped into some pretty basic paradoxes of art and modernity. The hydroörganon has to do with the way spectacle subverts meaning, and the anarchic concerts Alex reports on are about the interplay between transgression and civility. Earth World actually built an immersive concert around “The Lower Depths” called Songs for the Hydroörganon, where we printed the story in a concert booklet; people came to me afterward and said they wanted to find out where they could see one in action. By including descriptive passages that mimicked a rather dry, academic style, it led some audience members to assume it was true. We decided to keep going, and followed up with another concert about deluded classical music fanatics called “The Composer of Space.”

Alexander’s editor squashes one of his stories because it portrays a magazine donor in an unfavourable light. “Freedom of speech” has become a byword for bad faith speech, but the debate about academic or journalistic freedoms being curtailed has been ongoing for some time now. How do you see the matter of increasing corporate involvement with academic institutions and journalistic outlets?

The biggest threats to free speech come from powerful people; being able to speak freely and able to disseminate ideas to a large audience are not the same. Jeff Bezos doesn’t have to be editing the Washington Post to exert an influence on who gets hired and the kind of coverage they do. But the private sector’s domination of education and journalism is hardly new. It’s more noticeable because we’re again living through a Gilded Age that allows the most affluent members of society almost total control of the institutional landscape. People like to chalk this up to capitalism, but it’s not like it doesn’t exist under state-socialism, where you have to work with party bosses. As far as the arts go, you really need a lot of resources to run a publication, and if you’re not selling a product that people want to pay for, you’ve got to find other sources of income. The boring solution, perhaps, is a strong social safety net and a legal system that doesn’t unequivocally privilege the voices of the richest people. 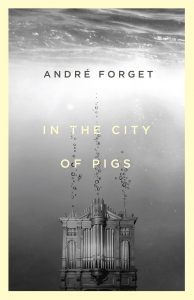 In the City of Pigs
by André Forget
Dundurn Press, 328 pp

As much as Pigs is a tribute to the city of Toronto, it is also a condemnation of the venality operating in a city of this magnitude. The “villains” of the book are those who might contend that in the absence of wealth, there is concurrently an absence of culture. In what ways is the book a kind of rejoinder to this attitude?

Empires and states have always used culture as a justification for tyranny and the history of literature is basically the history of imperial societies. The earliest examples we have were produced at the dawn of the Mesopotamian states, carved into monuments or written out on cuneiform tablets and stored with debt records. Even the most politically correct modern novel is, in its material production, tied up with capitalist violence in some way. I am aware that the kind of writing I do has a symbiotic relationship with structures of power. My book is a rejoinder to the people who don’t think this is actually a problem, or who believe there’s an easy way out of it.

You shepherded the millennial anthology After Realism, which featured writers who resisted the reigning realist impulse. To what do you attribute the primacy of realist writing, and do you think a new mode will replace it?

Non-realist writing has always been incredibly popular. Fiction containing elements of the gothic, the fantastical, the Romantic, and later on with horror and sci-fi, has always thrived in the marketplace. These genres tend to be viewed as lowbrow, whereas what we might call realist literary fiction tends to be beloved by the bourgeois classes. I suspect this is because realism is viewed as being more serious—the bourgeoisie is always suspicious of pleasure for its own sake—and better suited to dealing with questions about “how we live now.” I don’t know if a new mode will fully take its place. As long as people read books, there will continue to be multiple literary traditions developing in concert. At various times realism might go into abeyance, but I think it’s always going to be there.

It seems like the concept of the discursive public sphere in the arts has given way to a kind of shareholder/consumer mentality—this idea that the novel is a commodity, and audiences have a right to feel as if “I paid the price of admission, so there are certain deliverables I deserve to have met.”

Even the most politically correct modern novel is, in its material production, tied up with capitalist violence in some way.

The commercialism has definitely gone into overdrive. The English novel really exploded around the same time as the industrial revolution, so the form was, even in its infancy, a popular commodity. I think a lot of the current malaise of fiction can be explained by old-fashioned, vulgar Marxism. As publishing gets more and more consolidated, a smaller group of people are deciding what novels get picked up and what novels get reviewed. A lot of these people are trying to get a massive return on investment, and aren’t willing to let a talent slowly develop over the course of a few books. A lot of the problems with literature that get talked about endlessly online aren’t really problems with literature. They’re problems with hyperactive capitalism, which is in the long run blinkered, stupid, risk-averse, and petty.

Even as a valid aesthetic response, displeasure with the social mores or politics embodied by a novel should not be akin to the displeasure with the ingredients used at a subpar luncheon, right? What do you think the final consequence might be of novels needing to be tailored to an audience, instead of simply existing as an object of artistic contemplation?

I’d have to disagree with your assessment. I don’t think novels embody social mores or politics so much as they reflect, intentionally or not, the struggles of a certain place and time. This doesn’t mean I’m not viscerally offended by some things I read: I’m not going to make the case that people should “look past” the viciousness of a book like Trifles for a Massacre, or the racism and colonialism embedded in a lot of canonical works, because these shortcomings are not merely cosmetic.

But it’s hard to escape the feeling that there is a paranoia around meaning these days. A certain reader wants to be sure that the morality of a novel is immediately accessible: is this book on the right or wrong side? I was raised Baptist, and I was exposed to this way of reading early on. The problem with that approach is there is no way to absolutely control what a person will take from a text; no one can write a novel so impeccably right-minded that it can’t be misread. Seen a certain way, this can be very liberating: even if you try to write a politically correct book, you’re probably going to fail—if you succeed, it won’t be for long. So stop trying to write something an imagined authority will approve of. Just wrestle seriously with what it means to be a human being, living in conditions you did not choose, surrounded by people and social structures that place all kinds of impossible demands on you. Work hard on your sentences. Don’t settle for clichés. Don’t be afraid. I think that’s the place good writing comes from.