A native of Guelph, Ontario, New York-based Jesse Ruddock initially left Canada on a hockey scholarship to Harvard. Shot-Blue, her first novel (Coach House Books) takes a lyric approach to the story of an 11-year-old boy, Tristan, who’s forced to fend for himself in a harsh, unforgiving northern landscape after his mother suddenly dies. 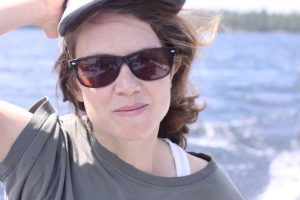 Brad de Roo: Though Shot-Blue is your first work of fiction, you’ve published a number of articles for various American journals and literary websites. How does the process of writing in each field compare?

Jesse Ruddock: Writing fiction is something I do pretty much alone. It’s like dancing in your kitchen or room, you know? Working on some steps. It’s up to you. No one’s watching or waiting. It has to feel wild, a little out of hand, or I’m not interested. That’s fiction, but articles have rules. Each piece is a collaboration with an editor. There’s a word count and probably a contract.So there’s less improvising and little subconscious at play, but I still try to keep that stuff in there. 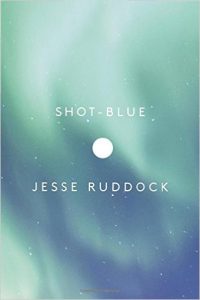 BdR: Do you note salient concerns between the topics and styles of these different works?

JR: The people I interview or write about may seem very different – a novelist like Eka Kurniawan or jazz musician like Avishai Cohen – but they share a rebel spirit. They resist lazy narratives and do things no one has heard or imagined before. That is, while keeping it soulful.

BdR: A rebel spirit also seems to inform many of your characters. Rachel and Tristan definitely embody rebellion, albeit in different ways…

JR: Yes, that’s true. Most of my characters are not interested in doing what they’re told. Not to say it’s easy – it’s not – but at least they know more is possible. The rebel spirit is also the creative spirit, and I love that.

BdR: Shot-Blue is published by Coach House Books in Toronto.  Have you noticed any differences between the CanLit and American Lit worlds you’ve moved through?

I admit I went to a lot of literary parties in New York, but they were not very fun. No one would disagree.

JR: About five years ago, my heart got broken and I ran away from home. I had been living in Guelph, where I was part of the music scene. I played in bands, I owned a sound system, I threw shows. It was a huge party – we danced and danced. There was a lot of collaboration and very little bullshit. That’s Guelph. I don’t actually know anything about the Canadian literary scene. I do know something about New York, because I landed there, crying in my cereal, and I needed work to pay rent. I did copyediting and other scrap jobs. Eventually I ended up apprenticing after some of my favourite editors – of all time! – and I thank god for that. They were strict and generous. But that scene is hardgoing. The bookstores, like Brazenhead, Left Bank when it existed, and Word Up offer shelter. But outside those walls, nerves are high, I think, because the reassuring rhythms of a quieter life are nowhere. I admit I went to a lot of literary parties in New York, but they were not very fun. No one would disagree.

BdR: Was writing a novel always the end-goal of your immersion in literature?

JR: No, I just loved to read. As a kid I read mostly poetry, listening to its music with little understanding. I didn’t get it, but I didn’t care, because it was beautiful. I decided to study poetry at Harvard to follow through on this blunt passion. I soon realized I had no idea how poetry worked, and I had to call my sister Nora for help. I immersed myself with no goals, and to this day try to avoid them.

BdR: Your book dramatizes the lives of characters in a fictional North. Why did you choose to set your book there instead of a real place?

JR: Any lake or town, any city, has its history and ghosts. I wanted to make it all up. I also wanted the reader to feel free to imagine that Prioleau Lake was the lake they grew up on, visited a couple times, or dreamed of once.

BdR: Nature is almost a character in Shot-Blue. Characters must always interact with the extremes and limitations it imposes on their lives via seasonal employment, inclement weather, travel by lake, geographical isolation etc.  Was it difficult to avoid making the characters overdetermined by the circumstantial strictures of such an environment? How does individuality persist in such a place, both fictionally and actually?

JR: You’re right, the lake and its weather push the characters around. But I like that. In any place in the world, people respond differently to extremes – it could be extreme weather or extreme boredom: both are real dangers. Our reflexes reveal who we are or want to be. Individuality might not exist – I think people are tied up in each other, especially family and old friends – but if it does, there is nothing like a rough day out on the water to bring your character out. It’s not just the north, either. Like I said, I lived in New York, and that city is pushy. If you are not rich, there are daily tests to get around, to get your meals, to take care. The way New York redundantly tests your nerves, that can define you there.

BdR: In you book, people are regularly tested, but women are often pushed to more limiting extremes. Were you seeking to confirm or dispel a particular take on gender or femininity?

Women are pushed to more extremes every day, everywhere. We are still fighting for the rights over our own bodies. That should be in my fiction.

JR: Not by design, not consciously, but that’s right: Women are pushed to more extremes every day, everywhere. We are still fighting for the rights over our own bodies. That should be in my fiction.

BdR: You sometimes employ animistic language to describe the objects making up your story. Boats, the water, the sky are painted as mysteriously alive. Are there any precursors – aesthetic or conceptual – in your use of such enlivening description? What appeals to you about describing the natural and human world in such similar terms?

JR: I see things that way! I have a serious relationship, for example, with my boat and motor. I love them and take care of them, and they take care of me. The water, the sky – they’re not things I see, take notes on, and use in my story. They never lull or repeat. I think they are alive. I don’t know them very well, but I want to.

BdR: Is there a sense in which this deep attention to and appreciation of objects is at the root of your creativity?

JR: Yes, but I have a lot of passion for people too. I think I’m all in.