By Emily Donaldson on September 20, 2018 Profiles in Bookselling 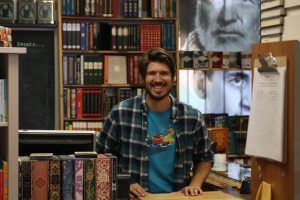 A recurring dream in which I contrive to reorganize our entire library according to tense finds me cutting out some pages from Volume VI of Tristram Shandy, and tinselling these to the slatted display rack near the front of our store. I mention the dream to Richard Young, our store manager, who abides my ineptitude, my various go-broke-fast schemes, with commendable ambivalence and restraint. He reminds me that we’re in the business of bringing in business, and not, you know, actively annoying our customers. “Still,” he says, “a shrine dedicated to Laurence Sterne, I could be into it.”

Pages Books, located just north of the Bow River on Kensington’s main drag, abuts a seventy-five-year-old movie theatre and Calgary’s largest “real life” escape room, where, for the price of two paperbacks, you can play a fourteenth-century, gibbet-dodging peasant “wrongly convicted of treason.” 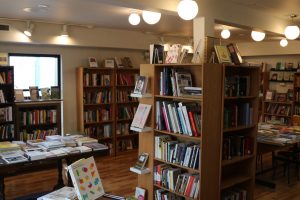 Open since 1993—our lot formerly housed a public library—the store boasts an impressive, if somewhat uncommon, collection. While the interested reader can still find, amid our large assortment of contemporary fiction, nonfiction, children’s books, and poetry, the requested Gaiman, Murakami, or Cusk, they will also encounter a vast selection of classics—not one but (as of this writing) six different translations of Flaubert’s Madame Bovary (staff recommends the Lydia Davis edition)—and an entire alcove solely devoted to independent presses, from Archipelago Books and Biblioasis through Wakefield Press. We feature as close to full collections as we can reasonably afford to shelve. Last week alone we received seventeen titles from Gaspereau Press. Our Dalkey Archives section—my favourite—now occupies a single wall (if only I made commission on Gilbert Sorrentino).

Fiscally speaking, you’d think such a narrow abundance improvident, but, insofar as we buy what you love, our stock reflects taste. (Also, those Bovaries sell, trust me.) The big hits this year have been Joshua Whitehead’s Jonny Appleseed and Carmen Maria Machado’s collection of short stories, Her Body and Other Parties, of which we have currently sold twenty-seven copies. And the year is still young. The new Miriam Toews just came in, and the new Vivek Shraya. 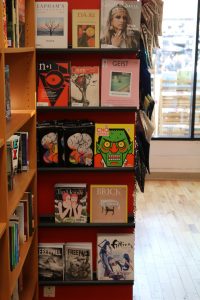 In his essay “Bookshop Memories,” George Orwell characterizes the customers who frequented the second-hand shop where he worked, in the thirties, as sorely unbookish, “Our shop had an exceptionally interesting stock, yet I doubt whether ten percent of our customers knew a good book from a bad one.” I would venture to guess that the inverse holds true for us.

That our all-time bestseller remains John Williams’s Stoner—which, for the uninitiated, concerns the matrimonial travails of a lowly Midwestern English professor (or, better say, assistant professor)—and not Paulo Coelho’s The Alchemist, should give you some indication as to our clientele. Saying this, I don’t mean to suggest that we cater exclusively to brooding literary types. We do and we don’t. We sell more Nesbø than Solstad (and more Simenon than both). Our YA section is robust and meticulously curated. We do well by Tomi Adeyemi’s Children of Blood and Bone and Morag Hood’s When Grandad Was a Penguin.

We started bringing in used books about four years ago, and now receive somewhere in the suburb of six hundred titles each week, with an unshelvable overflow lining the steps to the basement, where we keep all of our used and remaindered stock. Savvy regulars tend these stacks with an ardency that verges on the Borgesian. The first used book we obtained was Rob Lowe’s Love Life, which sits atop the bookcase we keep behind the cash—a black-and-white photograph of Lowe seeming to preside over our pricey Folio Society books, like a Russian icon or bottle of uptown Scotch, his cheekbones high and gaunted, taut as gunwales. May he never sell.

Rob Lowe and his cheekbones preside.

Me, I work weekends. Though “volunteer” may come closer to the mark. What with the money I continue to hemorrhage on books, I’m not sure I’ve earned a dime. Mornings, I like to get in a little early and flip on some Mingus as I peruse the new stock. Feeling adventurous, I might wander upstairs, and fuss with our poetry, which subsists in a state of total disarray—the task of alphabetization resembling some sort of interminable Grecian punishment. Now how did our Bidart get all the way over here?

Weather pending, I roll out our sales carts. Richard has expressed interest in acquiring a retractable barber’s awning to spare us the vaudeville-like gymnastics of scurrying the books back inside when it rains.

Richard has worked at Pages for the past eight years. Once a week he meets for coffee with a soon-to-be retired economics prof, who assigns him readings: Keynes, Hume, Edward Bellamy. The meetings frequently extend beyond their allotted hour and leave Richard reeling with schemes. These range from replacing our bookcases with loftier, floor-to-ceiling shelves to starting our own publishing imprint to installing a cappuccino bar upstairs to brewing our own beer.

“And I want to fix these,” he says, pointing at the ceiling’s liverish water stains.

I always liked that moment in Borges’s interview with The Paris Review when he describes Paradise—from the Persian, walled garden—as “a kind of library.” Over the spring, Celia, who works the odd weekend, dug up a plot behind our store and put in some flowerbeds. The area receives decent sunlight, despite the condos obstructing our view of the Bow. We’re growing strawberries, sunflowers, cherry tomatoes. A vine of hops rises up our fire escape, the cones budding, nearing bloom. 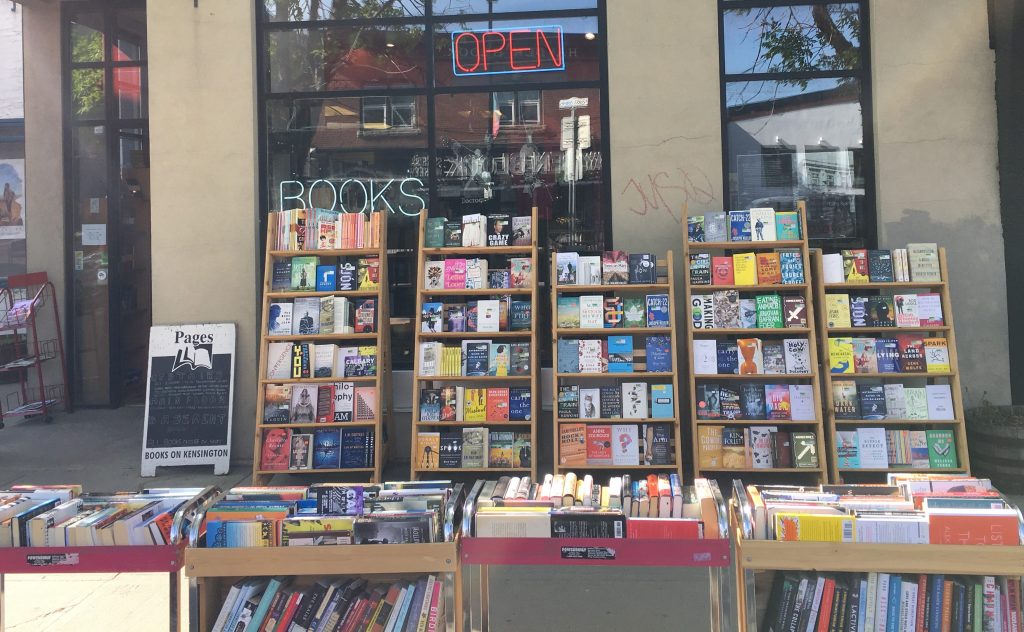