By Emily Donaldson on July 26, 2022 Profiles in Bookselling 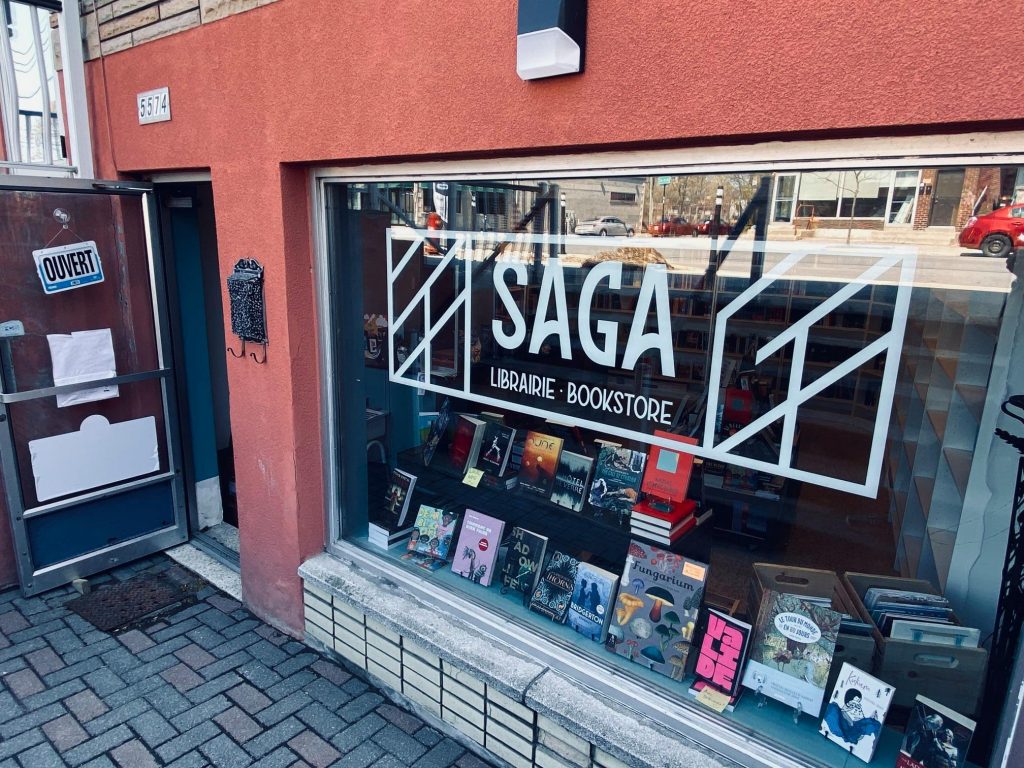 If you’re idealistic about what a book is—a piece of culture that can change your mind, your heart, and the trajectory of your life—you may also have a semi-devotional idea of what a bookstore is. For those who feel closer to books than to religion, a bookstore can be like a house of worship where you may encounter others of your proclivity.

As a matter of fact, every bookstore must also be a business. The store’s owners navigate between these two functions. Mathieu Lauzon-Disco and his husband Ilya Razykov, the owners of Saga Books in Notre Dame de Grace, have chosen which of these matters more to them. Their store exalts in love of literature, and idealism of what a bookstore should be. 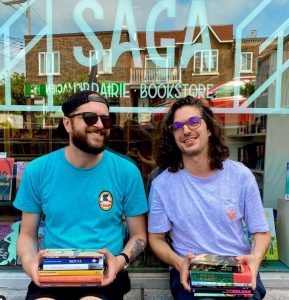 They chose a mandate for the store that reflects literature’s role in their relationship—though both are bilingual, Lauzon-Disco is francophone and Razykov is anglophone. Falling in love, for them, involved a discovery of the other’s favorite books, in the other’s language. Their favourite genres are sci-fi, fantasy, magical realism, and horror, so Saga Books specializes in those books.

Each section is stocked bilingually, sometimes with French and English translations of individual books. Their book club welcomes speakers of both languages with French and English editions of the same book, reader’s choice—French and English are spoken interchangeably in the store. I was surprised to learn that 60-70 percent of their orders include books in both languages; in a province where language-based political division is making headlines, it’s a nice reminder that linguistic variety contributes to both cultures. And that Quebecers are purposefully creating a multilingual culture together They work long hours, and their store is very special.

I came in on Independent Bookstore day, an annual celebration organized by the Canadian Independent Bookseller’s Association. There was a raffle for gift certificates, and the shop filled up quickly. It’s a glass-fronted room a few steps below street level, painted pink on the outside. The inside is mostly white, lit by a metal sculpture of branches growing leaves. If it’s your first time in, Ilya or Mathieu will describe the store’s organisation and ask what you’ve liked reading lately. Although this is typical bookselling talk, it’s intended to be the start of an ongoing conversation about books. They are emphatic that this is not about selling books as such. When I was there, the customers were keen to talk with the owners about their recent picks, the upcoming book club meeting, a recent reading event, and the shop in general. They asked for recommendations in sci-fi, and children’s books. Saga is stocking large-format books of the art from Miyazaki’s films, and the art of The Hobbit, as well as graphic novelizations of Dune.

I asked Ilya for a recommendation in magical realism, a favourite genre of his. We compared views on Tatiana Tolstaia (I love her, he thinks she’s bleak), Clarice Lispector (he loves her, I am respectfully annoyed with her), and Fernando Pessoa (we both like him, but he likes him more). Ilya recommended Hurricane Season, by Fernanda Melchor, a Mexican experimental novel that’s as dark and beautiful as anything I’ve read, and which I devoured in a day and night. I also bought Irish novelist Doireann Ní Ghríofa’s A Ghost in the Throat, which has been captivating, and a Korean coming-out novel, Sang Young Park’s Love in the Big City. Finally, I bought a reprinted edition of They, a dystopian novel by the queer English writer Kay Dick. For a bookstore that doesn’t emphasize its international literature, the selection is excellent. 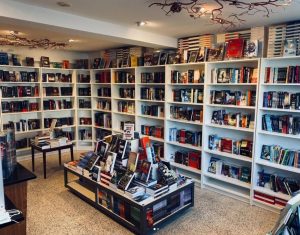 The owners’ goal of building community is bound up in their advocacy for what the French call paralitterature, supposedly unserious books like graphic novels and popular genre fiction. Theirs is the only shop in Quebec that focuses on these books, in French. It means that some readers take long trips to get to them. As for their selection of English-language books, they cover a lot of territory with the small space they have. The non-fiction section includes China Miéville’s October, Toni Morrison’s Whiteness and the Literary Imagination, and Milan Kundera’s The Art of the Novel. For classics, there was Shakespeare’s The Tempest, Jane Austen’s Lady Susan, The Fruit Thief by Peter Handke, Edith Wharton’s Age of Innocence, Italo Calvino’s Invisible Cities, Virginia Woolf’s Mrs. Dalloway, Franz Kafka’s The Trial, and Thomas Pynchon’s Mason & Dixon. The selections express a sensibility, something that is missing from stores who think of their books in terms of sales, or in terms of aesthetic statements.

Ilya and Mathieu have built something personal and specific; it’s not a store that anyone else could have created. Saga is not aimed at a demographic or a market. They will help you find the right book, and you’ll be surrounded by superb choices. They stock ghost stories, Hugo Award winners, obscure reprints, classic sci-fi and fantasy, and new releases that haven’t made their name yet. You have contemporary books, like Emily St. John Mandel’s and Carmen Machado’s, as well as stories by favourites like Shirley Jackson, Roald Dahl, and Edgar Allen Poe. If you want to buy the book that the video game The Witcher is based on, they have it, near Tolkien’s The Silmarillion and books by Terry Pratchett.

Saga is for book lovers, especially those who read the genres they specialize in. If you’ve been missing the atmosphere of such places, or the conversations that happen in them, you’re in luck. To be in an independent bookstore like this again is real comfort after a bleak time. It gives you the feeling a great piece of theatre will—inspiration, hope for what culture can achieve, the feeling of being a part of something, connected to others who rely on the power of art.

—Elisabeth Gill is a freelance writer who lives in Montreal.