By Emily Donaldson on July 20, 2018 Profiles in Bookselling 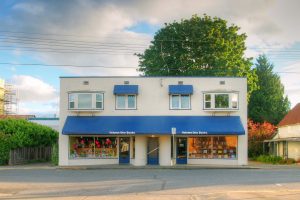 At fourteen, I was a known pest at my hometown bookshop, Volume One Bookstore in Duncan, British Columbia. By then, I’d bought up all their entry-level fantasy stock—your Dragonlances, Forgotten Realms, and Shanaras—and found myself having to order titles to fill out the various series. This was pre-internet—I actually had to go into the store, look through a catalogue, and pick out the titles I needed. Then I’d show up every day and ask if my copy of Book Four of the Meetings Sextet, The Oath and the Measure (or whatever) was in. I was not what you’d call a cool kid.

The clerks were as patient as could be expected—I could not be made to understand that orders took four to six weeks to arrive. Eventually, one of them, tired of my daily visits, steered me toward some of their other stock. She suggested I try Kurt Vonnegut; it was like sci-fi and fantasy, but “less lame,” she said. The recommendation probably had more to do with keeping me out of her hair by making sure I was reading something than it did with guiding my development as a reader, but the effect was the same. I began moving away from sword-and-sorcery and toward literature.

Volume One has been Duncan’s sole independent bookshop since 1972, during which time it has seen the region’s population boom, as well as businesses moving from the heritage buildings downtown to the box stores on the highway. In recent years, the downtown core has seen something of a revival; there’s a weekly farmer’s market and a re-emphasis on pedestrian traffic. The town is busy enough these days that some shops now open on Sunday. 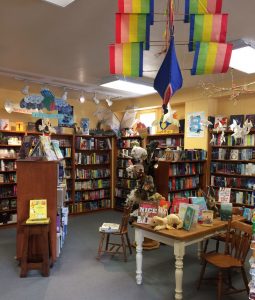 Through all town’s changes, Volume One has remained in the same old building, with its creaking, not-quite-flat floors and it’s lower-than-I-remember ceilings. It’s larger than it seems; with a clutter of packed bookshelves that hides the size of the shop well. It’s usually staffed by two or three people—and though the customers are a steady mix of regulars and tourists, the shop never seems too busy or crowded when I pop in while visiting home. Despite the years that have passed since I was a regular there, it always somehow seems the same.

Volume One’s children’s section takes up almost half the store. It has a separate entrance—a carryover from when The Red Balloon toy store (another Duncan institution) was housed next door. The two shops had an interior door between them, and original owner Kathy Coster noticed that parents would leave their kids to play in the toy store while they went book shopping. When the toy store moved to a bigger location, she took over the space and knocked out the wall between shops, creating a space for children that was, and remains, their own.

Current owner Sonia Ottosen bought the store in 2016, after working there for a decade, and knows well the value of that kid’s section. She encourages young kids to handle books, to play and engage with the area. Letting kids run loose is not without it’s problems, of course; but Ottosen doesn’t mind, “A torn-up book is worth it if the parents come again,” she says. This freedom gives kids a sense of agency, as though it were their own store, and allows them to develop their own interests, at their own pace. 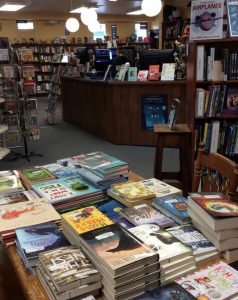 Discoverability is the key to attracting customers of any age, and it’s something that Gary MacGregror, one half of the ownership group that ran the store for the fifteen years before Ottenson bought it, knows well. Macgregor brought a quarter-century of bookselling experience to Volume One—including stints as a sales rep for Doubleday and bookseller at Vancouver’s venerable and now-defunct Duthie Books; he knew how to make the bookstore an experience for his customers. “At a store like Duthie’s,” he explains, “you try to be as complete as possible. If someone comes in and wants an obscure book, you want to be able to say, Yes, I have it. But at a smaller shop, you have to actually curate the stock [so that]that if someone walks in, there is a range of interesting things jumping out at them.”

At Volume One, MacGregor “tried to create something that, when you walked in, there would be interest. And that interest would drive you to the next spot, and in that section, it’s not stale, dull, there are things you expect to find, but there’s also something you didn’t.” It’s a time-tested approach—using discoverability to introduce readers to books they didn’t come in looking for, it’s also the sort of thing that leaves a lingering good feeling with a customer, a sense that the store has everything you could want.

This leads to adult stock you’d call eclectic. There are the usual bestsellers and buzz books, but also a mix of local authors and regional books—a book on nearby hiking trails is a bestseller. And MacGregor was always surprised by what he could sell. He knew bookstores that were forced to buy narrowly, to keep to what they knew they could sell, but he found he could sell books of “real substance”: science, history, and academic. MacGregor sums it up, “We were lucky to push the edges of wanting to create—not a mini Duthie’s, but something that had that quality. And we were generally rewarded by our customers.”

The business model has worked well enough that Volume One has managed to avoid the wild swings the trade is known for— the consecutive, and supposedly small-bookstore-killing rise of outlets like Chapters, Amazon, and eBooks left the store largely unaffected. So much so that when MacGregor and his partner decided to move on, Ottenson was happy to buy what she calls a “well-run and viable business.”

Hearing a bookstore described in such terms is refreshing—the long-suffering, perpetually grumpy bookseller being nearly a stock character. That Volume One has endured is a sign of the mutual support between the business and the locals that had been has built over three generations of the stores existence. Its various owners have created and maintained a space between commerce and public service that develops young readers into lifelong customers who come in for what they want and leave with what they didn’t know they needed.