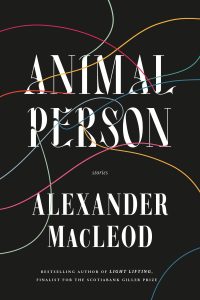 I’m generally wary of epigraphs. When they aren’t signalling “You’re in some seriously erudite hands here, reader” they often just feel like overreach. But Alexander MacLeod could have found, truly, no better lines with which to open his new collection than the pivotal ones from Elizabeth Bishop’s “In the Waiting Room.” The eight stories in Animal Person pulse with the weirdness of being one person, of not being other people, and those switches in perspective—trees for forest for trees—that remind us we are part of the other that makes up everyone else’s self.

“Everything Underneath” is about sibling rivalry and, more broadly, the experience of being a human in a body. It begins on a beach in Nova Scotia, with two sisters getting the hang of the discount snorkels their mother has bought them, learning how to draw air out of the sky and down into their mouths below the waterline. With eleven months between them, the narrator and her sister are at once too close and too far apart. They know almost everything about each other’s bodies and are continually disgusted by the other’s very different way of inhabiting hers. The narrator even hates the way her sister walks.

In “Once Removed,” Amy and Matt, a young couple living in Montreal with a newish baby, are invited for lunch by Greet, one of many elderly relatives in Matt’s sprawling Cape Breton family. On the way over, Amy chafes again at thoughts of visits back to Inverness County, where strangers sidle up to her in the grocery store to ask versions of the same eternal question: “Who would you be, now, to me?” In her annoyance it takes Amy some time to realize Greet has an ulterior motive for inviting them over.

“Sometimes, in the middle of a day, you find yourself doing things you never imagined in the morning.” Following a large lunch, they take the elevator down to the apartment of Greet’s friend Reggie and Matt is supervised in removing from the ceiling a large, ugly chandelier, Reggie’s prize possession, to be secreted away in Greet’s spare room, out of sight of the daughter in law Reggie is certain thinks she will be inheriting it. Greet’s spare room is stuffed to the hilt with these kinds of treasures. Considering that she is perhaps just this sort of undeserving relative herself brings Amy an odd joy. (Who would you be, now, to me?) And later, she and Greet roll their eyes at Matt, who is exuding that smug wholesomeness of men performing tasks for old ladies. Other goes both ways. Many ways.

I remember reading a joke-y (though positive) review of MacLeod’s first collection, Light Lifting, titled “Alexander MacLeod ‘lifted’ my stories.” Several times throughout this new collection I was struck, as that reviewer was, with a thought along the lines of, How did you know I felt like that then? There is relatable and then there is an author, seemingly, reaching out of his story and into the reader’s own private set of memories.

This feeling was most acute reading “The Entertainer,” which takes place during a piano recital at a retirement home. It captures that exquisite state of wanting to be anyone else in the room but yourself, stuck at the piano, before taking us into the minds of the other people (Roxy the piano teacher and resident Gladys Ferguson’s husband). “Right now,” thinks Darcy, who knows he’s about to botch his piece, “I am the only one who understands how bad the situation is, but in about ten minutes, my disaster is going to swallow everyone in this room and then we’ll all be in it together.”

One of the pleasures of MacLeod’s stories is the sure-handedness of the storytelling itself, the cognizant shaping of the path through the details, the placing of beginnings and endings. There is a confidence free of the bravado that sometimes pervades this kind of authorial presence in fiction. Early in the first story, “Lagomorph,” about the acquisition of a pet rabbit and the eventual end of a marriage, comes the interjection, “It is important to establish, before this begins.” And the final story, “The Closing Date,” in which a husband recounts how he and his wife and their young daughter came in direct (eerily peaceful) contact with a serial killer at a budget motel a few years before he was caught, the narrator tells us, “This is the rest of it.”

On one level, each of MacLeod’s stories is a defender of the scope of short stories, their ripeness for the sharp articulation of phases and turning points. Light Lifting was a highly accomplished debut; Animal Person doubles down on the author’s dedication to the genre.