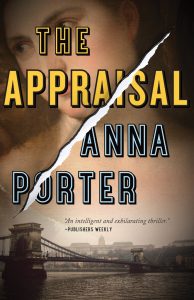 “One of the advantages of a lifetime spent among tigers is that you are not disappointed when they act like tigers,” reflects Helena Marsh, the art-historian heroine of Anna Porter’s intricate and atmospheric novels The Appraisal (2017) and Deceptions (2021).

If the idea that an art historian spends her lifetime among even metaphorical tigers seems paradoxical, then you will be (as I was) fascinated by Porter’s portrayal of the highstakes, morally equivocal, and often clandestine global trade in fine art masterpieces. Porter’s plots are a deft and entertaining blend of caper, crime, and thriller elements, but it’s this context as well as their setting—primarily Hungary, a place where, as one observer remarks, “the present was so deeply rooted in the past, it was not even the past”—that gives them their rich texture and unexpected depth.

Both novels begin innocuously enough, with a call on Helena’s expertise. In The Appraisal, she is asked to examine and purchase a possible Titian for a collector in Toronto; in Deceptions, she is hired to authenticate a painting that may be by Artemisia Gentileschi, which is (or so she is told) a bargaining chip in a fractious divorce. While Helena certainly needs her formal qualifications—her university degree and her training at prestigious auction houses and galleries—to carry out these assignments, her extracurricular skills prove even more essential to her success as well as to her survival: not only can she tell a Picasso from a Pollock and a copy from the real thing, Helena is also a mistress of disguise who can take down bad guys with her quick wits, martial arts training, and marksmanship.

Helena learned much of her art-world savvy as well as many of her less conventional talents from her father, an enigmatic figure she only belatedly realized had made the money that paid for her comfortable upbringing and elite education by “running an exceptionally successful business selling fakes and forgeries to buyers too eager to demand all the papers proving provenance.” The tips and tricks he passed on once seemed irrelevant: “she hadn’t known that recovering lost works of art would become part of her profession or that such work would expose her to the fury of those loath to give up what they had.” Though her own work is more or less legitimate, Helena has to engage in violence and double-dealing as she fends off unscrupulous competitors and collectors, including ruthless oligarchs and their thuggish agents who block, pursue, and threaten her but find themselves repeatedly overmatched. 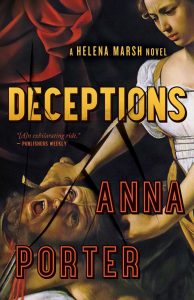 The high mortality rate in both of Helena’s cases inevitably raises questions about how much the paintings at issue are really worth—about what determines how much people are willing to pay for them, in dollars and in blood. “Don’t ask me how these things are valued,” says Attila Feher, a former police detective who becomes Helena’s ally and occasional lover; “all I know is they usually go for more than the last time a painting by the same artist was sold.” What do these ever-rising prices measure: beauty? rarity? authenticity? the thrill of the chase?

Helena’s efforts focus primarily on provenance, which is only partly to determine if the paintings are genuine. Every painting has a story, the pursuit of which in both novels leads her beyond aesthetic or proprietary claims to larger questions of justice. Her investigations take her deep into Hungary’s grim past. The Toronto client who hires Helena in The Appraisal was “sixteen when the Russian army replaced the Germans in Budapest and took him off the street, on the Buda side, for a little work—that’s what they called it—in the Soviet Union. He was there for almost three years. No. 442 Vorkuta Gulag.” The painting in question in Deceptions was appropriated when its original owner was murdered by the Arrow Cross, Hungary’s equivalent of the Nazis: “They were running short of ammunition,” his granddaughter tells Helena, “tied people up so they couldn’t move and threw them in the river.”

“In the Gulag,” Attila notes, “rules of right and wrong didn’t apply. Now we have laws of restitution.” At stake in both novels, it turns out, is a different kind of art restoration, one that combines analysis of paint and canvas with the righting of historical wrongs. In this respect, as with the elusive paintings that drive their plots, there turns out to be more to Porter’s clever and suspenseful thrillers than first meets the eye.