By Emily Donaldson on September 23, 2022 Reviews 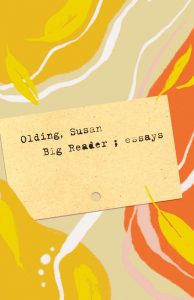 “An essay was never about just one thing,” writes Susan Olding. As writers of creative nonfiction explore new relationships between content and form, the braided essay has emerged as a generative structure for lyrical experimentation. Big Reader, Olding’s second essay collection, following 2008’s Pathologies: A Life in Essays, proves her once again to be one of Canada’s finest literary braiders. The book interlaces strands of personal narrative about her lifelong devotion to books with research-driven writing, binding subjects that might initially seem unconnected. Narrating her life through the lens of her reading, Olding examines both the intimate and the intellectual with an exquisitely crafted voice.

Opener “In Anna Karenina Furs” sets the stage. In one strand of the essay, Olding explores her changing relationship to Tolstoy’s great heroine, who sacrifices everything for love. She details her first encounter with the dazzling Anna in a high school English class, recalling how teen Susan aspired to Anna’s freedom and willfulness. While these reflections on literature and self-creation sparkle with wit, the other strand of the braid is a gripping personal narrative. Olding recounts meeting her own Vronsky in her early thirties, while married to her own Karenin. Capturing the breathlessness of new love with precise sensory detail, Olding viscerally conveys the world-tilting power of this affair. “In Anna Karenina Furs” braids the literary and the personal into a captivating and insightful examination of love.

In Big Reader, the essay is a polyglot genre that absorbs the essences of other literary forms. At times the collection feels like a travelogue (“A Pilgrimage to Hampstead…”), a memoir of feminist awakening (“Beach Reading”), even a Bildungsroman in miniature (“A Different River”). Between the essays, a series of sprightly prose poems about reading form an interstitial chapbook. A versatile writer of many gifts, Olding has also published fiction and poetry, and her essays draw from both. In “Wicked,” a meeting with Zee, her grown step-daughter, at a Chinatown restaurant sparkles with witty dialogue freighted with deep emotion, a deftly rendered scene that rivals the best novels. Olding is a master of description, and has a poet’s eye for precise detail. “Library Haunting” brings to life the children’s section of her neighbourhood library growing up: the cool tile floor, the dust motes floating in the air, the tall card catalogue, even the feel of the cards inside, “the new ones crisp and self-important; the older ones sometimes scribbled on and softened.”

Olding’s inherently curious mind animates Big Reader. Possessing a kind of double vision, her essays are never simple narratives but are always knotted together with intellectual questing, navigating the relationship between her own life and the wider world. The researched strands of the braids buttress the personal recollections, preventing them from becoming a too-diffuse series of memories. They also provide a scaffolding that allows Olding to detail painful emotional subjects with grace and a light touch. In “Blood Typing,” she dives into the grief of living through the protracted death of a parent. And she does so with eyes wide open, cataloguing her difficult relationship with her distant father, and how alcoholism hastened his failing health. Without diminishing the harshness of this emotionally bracing narrative, the second strand of the essay offers relief. Olding’s discussion of Japanese blood type personality theory, a kind of blood astrology, serves as an intermission, a moment of pause that allows the narrative’s personal aspects to resonate all the more deeply.

Big Reader is a boon for the bookish. Readers will inevitably come away from it with new titles scribbled into their to-read (or to-reread) lists: Keats’ poetry and letters, The Golden Notebook, Flaubert’s Parrot, Vivian Gornick’s criticism, Sally Watson’s Lark (which Olding stole from the library as a child). Although many of the books mentioned in the collection are novels, “Unruly Pupil” tackles the genre that Olding has made her own. Recalling her time working in a bookstore as a university student, she details her first encounter with the essay, on a shelf where “we kept the books we couldn’t easily classify.” There she found collections of “meditations…peregrinations…disordered yet artful disquisitions,” by Orwell, Woolf, Baldwin, Sontag, Rodriguez, Benjamin, and others. Olding “drank them in [and]absorbed them,” realizing that “you could stuff an essay’s pockets with almost anything and get away with it.”

The capaciousness of the essay form has enabled its persistence and perpetual reinvention across centuries. In Big Reader, Olding embraces that latitude and the range of styles, voices and perspectives it has empowered. The book is a keen reminder that the genre has a long and vital tradition that predates its recent status as the early-twenty-first century’s literary darling.