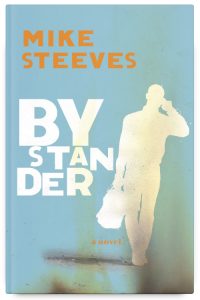 At the beginning of Bystander, Mike Steeves’ sophomore novel, the as-yet unnamed narrator makes a call to his parents. He’s just returned from a nine-month assignment to an equally unnamed foreign city for his high-paid but vague position at an also unnamed company. “They found the black box,” his father tells him, remarking on a recent plane crash in the news. The black box is a system in a plane that “produces a recording that is used in a forensic investigation.” In other words, it determines fault in the aftermath of catastrophe.

His mother interjects, “I don’t know what’s in one of those black boxes, and neither do you.”

Bystander is a recording of a catastrophe. The novel follows Peter Simons, whose name we do not learn for over a hundred pages, as he reluctantly navigates the communal politics of his apartment block after his neighbour dies in the suite beside him. Bystander is a late-capitalist morality tale about what we owe to our neighbours—a black comedy about a contemporary American Psycho: not a serial killer, but a pathological invertebrate, a man whose compulsive passivity and sworn liberal-mindedness disconnect him emotionally, psychologically, and spiritually from those around him.

Peter’s apathy towards others comes from his desire for “a frictionless existence.” For twelve years, he has successfully managed to avoid connecting with his neighbours: “the Shih Tzu Lady” and “the Grim Reaper.” He recounts a time at a hotel when he heard the couple in the next room fighting: “It got so bad that I considered calling the police. It was impossible to say for certain whether actual physical abuse was taking place, or if it was merely an intense non-physical fight.” Ultimately, he’d decided not to intervene, because “when we do, we usually get it all wrong.”

Peter is aware that his circumstances have “reduced” him in a way that informs his interior landscape, his relationships (“a collection of customer service-like transactions”), and ultimately his action or inaction. “Just as humanity, over centuries of alienating industrial production has been cut off from nature,” he muses, “I have, in a considerably shorter time frame, and without the attendant world-historical consequence, cut myself off from humanity.” Marx’s theory of the annihilation of time by space may explain how constant travel to nameless locales, mindless consumption of social media, prestige TV, and longform articles about human suffering elsewhere, and the meaninglessness of day-to-day labour have created Peter’s nameless, placeless, insubstantial world. Peter says as much himself: “After spending so much time by myself in foreign countries, where everyone looks the same (to me), and sounds the same (to me), I got the feeling sometimes that I was the only real person in the world and that everyone else was imaginary.”

The novel’s action is accordingly thin. Formally, the prose replicates the psychology of existence in late capitalism. Interior monologue dominates, interrupting scenes with meandering thought, mirroring the narrator’s preoccupation with himself. Despite the circumstances, very little happens in Bystander. Yet the narration is consistently funny, which carries the reader through the novel’s slow-moving waters. Admittedly, a tendency for repetition sometimes lands less as humour and more as bloat (e.g., “the masks that we all wear, the screens we all hide behind, the faces we show in public that cover the private ones, our true faces, the ones we never show anyone and haven’t even seen for ourselves.”) The bloat could, I suppose, also be attributed to capitalism.