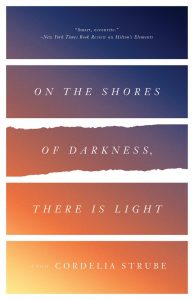 On the Shores of Darkness,
There Is Light

From its title, borrowed off John Keats’ poem To Homer, to its young protagonist’s obsessive plans to follow in the footsteps of Tom Thomson, Cordelia Strube’s new novel demands that we view ordinary lives in terms normally reserved for the epic, the artistic, the magnificent. Respect must be paid to the children, women, and men (in this order) who inhabit On the Shores of Darkness, There Is Light. We overlook the quiet poetry of the everyday at our own peril, but Strube’s knack for shining a spotlight on it reveals the beauty in the lives of others — and the cracks in her storytelling. The results are frustrating and fascinating, leaving readers with a novel that, at three hundred and sixty-five pages, feels emotionally bloated but, ultimately, supremely compassionate.

What could be more ordinary than the Shangrila, a rundown housing complex on the edge of Toronto, where eleven-year-old Harriet lives with her divorced mother Lynne, her sick brother Irwin, and Gennedy, a pseudo-stepfather figure. The Shangrila also doubles as an unofficial retirement home, bringing to life memories and visions of a long-gone Toronto. Harriet, who rarely spends time with children her own age, makes money off the senior set by charging them for running errands to the corner store and the local Shoppers Drug Mart or by fixing their computers. Once she has saved enough, she plans to run away from her family and into a cabin in Algonquin Park to paint, just like Thomson did a century earlier. Harriet’s biological father, Trent, deserted the family after Irwin’s medical condition (hydrocephalus) was diagnosed and tensions between him and Lynne became too much to handle. He now lives with Uma, a highly strung graduate student in women’s studies hell-bent on getting pregnant through artificial insemination.

As in an earlier novel, Lemon (2009), Strube creates a world where adults act more like uncontrollable adolescents — selfish, immature, petty — while Harriet and her brassy friend Sydney, who’s all of twelve, seem wiser or more embittered than their actual age. Even Irwin, whose seizures can leave him shitting his pants, and whose large skull freaks out other children, shows more dignity in the face of adversity than his parents and their respective lovers. There’s something very romantic — and very Romantic Poetry, hence Keats — in viewing children as either moral compasses or repositories of innocence and wisdom. But for a novelist of Strube’s talent — there’s some beautiful prose here and the dialogue shows traces of “writing for the ear” from her days as a radio playwright — it also offers a convenient and easy way to turn stories on their heads or challenge societal norms about, among other things, parenthood. And it comes with some credibility issues in the narrative tone of the book.

For me at least, Harriet feels more like an author’s fantasy than a fully realized, credible character entrusted with carrying a large part of the novel. Her precociousness is not the problem, per se; it’s how the narrator deals with it that took me out of the world of the book and diluted the effects of Harriet’s emotional isolation. Harriet is a child who thinks “sadist” comes from being sad but concurrently has enough lucidity to question Uma’s career choices and qualifications. And whenever the narrator thinks that one of Harriet’s pronouncements seems like a stretch for an eleven-year-old, she quickly adds that the little girl must have heard it from her mother or an elderly person. A child who gravitates so easily between naivety and gritty realism leaves me wondering if she’s too old for the former and too inexperienced to fulfill the latter.

Strube mines ambivalence and contradiction to better effect in the way she turns a housing complex like the Shangrila into a microcosm of race and class relations in contemporary Toronto. In a review of Lemon in the Globe and Mail, Donna Bailey Nurse argued that Strube writes from a “self-consciously white perspective.” On the Shores of Darkness continues that tradition; however, it offers a more complicated picture of race tensions while also hinting at a possible reconciliation. Harriet may be surrounded by bigoted neighbours who fall back on 1950s slang (or infantile humour) when referring to the Chinese owner of a convenient store, or the South Asian superintendent, but on the rare occasions she receives comfort and love, they come from outside her blood relations. Mr. Hung, the convenience store owner, often gives Harriet day-old muffins or dented chocolate bars for free, an act of “generosity” that baffles Harriet since she doesn’t think he likes her all that much. Still, she’ll take kindness where she can find it. The Riveras, a Filipino clan who live in the same complex, treat her like a member of their Karaoke-happy family. Not that these characters are given much of a chance to develop beyond their ethnicity-based one-dimensionality.  Even in the heart of multicultural Toronto, awash with Iranian doctors with thick accents and a fleet of Filipino medical-lab workers, immigrants inhabit a marginal space in Strube’s story.

As do intellectuals, the comfortable middle class or anyone with the semblance of a career. Uma, Harriet’s stepmother, reads like a series of circa-1999 clichés of the health-conscious and ecologically aware feminist.  Gennedy, a criminal lawyer by training, devolves into a lazy bum who leeches off Lynne (and, by extension, her children).

Structurally, the novel is divided into two parts. The second and shorter one feels more like a coda to the first but it introduces Heike, Harriet and Irwin’s seven-year-old stepsister. If Harriet — who’s offstage in this part — is precocious, wait until you meet her sister, who pretends to go on stakeouts and has a thing for amateur detective work. (She’s seven, remember.) The story takes a tragic twist at this point that I won’t reveal, but it moves from the darkness to the light, as per the title, too quickly and somewhat improbably. There is a happy ending and a final moment of joy and connectedness that only a curmudgeon would deny the long-suffering Irwin. This quiet boy, now teenager — who may well break out of the family tradition of pathetic adult males — emerges as the true heart and soul of this novel. Worthy as he is of this narrative power transfer, Strube hands it to him at a heavy price.