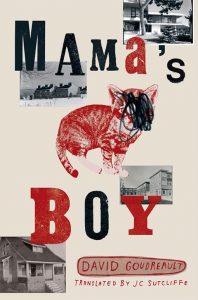 Should we care about the company we keep in fiction?

In recent years there have been at least a couple of prominent instances of Canadian (at least for prize purposes) novels where the protagonist’s moral character became an issue. Claire Messud had to defend her character, Nora, from The Woman Upstairs, from an interviewer who said she wouldn’t want to be friends with her. This led to a media debate over the question of likability in fiction, with the strong consensus, at least among literary types, being that it shouldn’t matter and that, in particular, it shouldn’t be a criticism levelled at female characters.

This last point may be of particular significance, as a few years later it was Nino Ricci’s turn in front of a tribunal for his novel Sleep. It seemed that every reviewer of that book had to take a kick or two at failing academic David Pace. His crime? Sleeping around. This would not do, and whether it was the result of honestly held moral scruples or just virtue signalling to the masses, Sleep had to be held accountable.

I couldn’t help thinking of these two cases when reading David Goudreault’s Mama’s Boy (a translation by JC Sutcliffe of La bête à sa mere). The narrator—who adopts different names throughout the novel—is a thoroughly awful person whose political incorrectness is the least of his legion faults. As a user and abuser of women he puts David Pace to shame. And yet he is likable: a contemporary version of the charming rogue or picaro scamming his way through various satirical misadventures. Even in these censorious times, when outrage has all but entirely replaced criticism, it would be hard to imagine a reviewer saying they didn’t enjoy Mama’s Boy because the narrator is a bad man.

Tone is obviously a big part of the difference. Mama’s Boy is a comic novel: the story of an Untermensch whose delusions of grandeur and superiority are meant to provoke laughter. It seems everything the narrator deems useful to know is something he’s picked up in discussion forums on the internet (examples: “Women’s chests reveal a lot about their personality,” and “Greeks are very religious, it’s a genetic thing”). Internet learning has instilled in him the pride of the digitaldidact, which scorns the pretensions of formal education:

I do things intuitively, I’m a natural, as they say. Diplomas are only good for boosting talentless people’s self-esteem. It’s taxpayer-funded brainwashing, that’s all. Einstein didn’t do a PhD in relativity. No great author studied literature. Even the saints had no theological education. In life, you’ve either got it or you haven’t. And I’ve got it.

Yet no matter how absurd his pretensions to being smarter, stronger, and better-looking than everybody else, it remains true that his “way of life” has forced him (in his own estimation) to become more “resourceful, creative, and practical.” But he also possesses the most essential quality for winning readers over: the ability to plead his case in an entertaining and articulate way.

Not surprisingly, this is another thing our antihero prides himself on. While he holds much of the world in contempt, he particularly despises the illiterates whom he frequently comes in contact with.

The language is in a desperate state among barmaids and other drug addicts. The government ought to come up with some program. Put reminders of grammar rules on cigarette packages maybe. It’s not like the rotten teeth and cancer photos put anyone off.

That said, he has little use for actual literature. “Culture’s important,” he tells us as he steals the first couple of volumes from “a rather nice edition” of The Human Comedy, which he finds in an apartment he has broken into. The books, however, will be mainly useful for expanding his vocabulary: he has no intention of reading any more Balzac than what he can easily carry with him. Aside from this functionality, his other main use for literature is as jerk-off material. On his way to one such session he even visits the Quebec fiction section of a bookstore and rips the covers off “two promising novels by Nelly Arcan.” As a result of such a perversely directed self-education, his own name-dropping habit is an endless series of mangled cultural references and malapropisms. It’s all well documented, as he likes to say.

But passing moral judgment on the narrator, who is clearly a beast—even finding him a likeable or unlikable—is a trap. Like many such picaros living by their wits in a fallen world, he sees conventional morality as a form of hypocrisy that he is eager to expose. Judge him at your own risk.

The novel’s main motif for expressing moral hypocrisy comes through its discussion of the treatment of animals. We soon learn that the narrator, perhaps trying to fill in the squares on the psychopath checklist, kills cats. But he doesn’t think we can stand in judgement on him for this:

People’s crass hypocrisy exasperates me. Oh no, he killed a cat! So what, for fuck’s sake? We stuff our faces with dead animals all year long. Hundreds of them. Thousands. Tens of thousands during a lifetime. And of course tons of them are tortured during the process, raised in disgusting conditions, separated from their mothers and force-fed before being assassinated to feed human slugs. And I’m supposed to feel guilty about having killed my own cat, that I brought up and loved?

The same feeling overtakes him later, while out on a date with a co-worker who insists on stuffing her face with a “steaming heap of protein.” This time he brings in some of his ersatz learning to help him out:

All animals are made to be eaten, it’s in the Bible and it’s well documented. We’re too hypocritical to eat our cats and dogs, but we could eat them, just like other animals. We should feed the poor with all the pets that get murdered at the SPCA. It would close the loop since it’s their own four-legged friends they’ve abandoned between houses. But when push comes to shove we don’t have the balls to follow through on our ideas.

Given the blurring between the human and animal worlds implied in the way he expresses himself (cats and dogs are “assassinated” and “murdered”), it’s a pity that Mama’s Boy loses the “bête” from the French title. Identifying the narrator as the beast underscores how such arguments cut both ways. Animals are like us, and we are like them.

An attitude like this may make him seem unlikable, but after a bit of self-reinvention it lands the beast a job as an animal control officer with the SPCA, where he is led to meditate on various other hypocrisies in society’s treatment of animals. Going out on calls he reflects on how

There are so many abandoned animals. And no laws to condemn the irresponsible people who throw them out when they move house. It shows how stupid our legal system is. We have this whole setup to punish thieves who are just trying to survive, but do nothing about the bastards who abandon living creatures by the side of the road.

Of course he is one such thief that the legal system (and every other system) is against, so there’s special pleading going on here. We get more of this when he considers the number of people with good homes waiting to adopt abandoned animals. This has a personal sting because he is himself an orphan raised by a series of families inadequate to the difficult task.

I learned that there was a bank of names of families willing to take in and care for injured animals. That disgusted me. Seriously, foster families for animals when there’s a shortage of them for humans? Worse still, the ones they par children in are poor or dangerous. I’d have been better off being born as a Bernese mountain dog.

And the rest of us would have been better off too! This is another example of how everything that’s said in the book cuts at least two ways, and I think JC Sutcliffe’s lively translation does a great job capturing both the quickness of the story (which has to keep pace with the beast’s sex-and-drug fuelled hyperactivity) and the dense irony of the narrator’s boasting, which has more to it than just sending up the bully who is a coward and the nobody narcissist. Psychopaths and narcissists do have a power to charm and other qualities that impress us. They are performers we can’t help but watch.

As with many first-person antiheroes, most of what the beast says can and will be used against him later, but irony doesn’t diminish the force of his articles of complaint against society and his uttering of inconvenient truths. There is a slyness at work here that Goudreault handles marvellously. Because, despite being a comic figure, the beast is far from harmless. He is both a character with a long literary pedigree and a villain for our time: the troll with a million page views on his YouTube channel who grows stronger in the face of our outrage at his antics. We laugh because we take him literally but not seriously. I think by now we’ve learned that this is the wrong way around. A lot depends on minding the difference.