By Emily Donaldson on December 9, 2022 Reviews 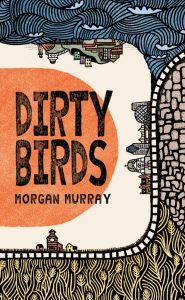 The Canadian Künstlerroman, or artist novel, has a strange history, and Morgan Murray’s debut novel, Dirty Birds, skews that tradition even further. Dirty Birds offers a vision of the art world in which Leonard Cohen runs an organized-crime syndicate, crackhead puppeteers roam the streets of Montreal, and a young poet’s dreams are mercilessly and repeatedly shattered. In Canadian literature, a few novels and authors have pushed this sub-genre of the Bildungsroman in new directions. Lawrence Hill’s early novels, for example, tend to use elements of the Künstlerroman in innovative ways to discuss complex intersections of race and writing in North America.

Murray’s absurd and comedic work, published by Breakwater Books, is an example of this revolution in form. Dirty Birds is new and exciting for a variety of reasons, but one of the more striking elements of this artist novel is how Murray pauses the narrative for lush sketches that encourage the reader to consider a particular object. Some of these images are humorous, such as “Fig. 24. Intercontinental Ballistic Dick Missile.” Others, such as the sketch that closes the novel, carry a deep level of pathos. These aren’t just sketches to flick through. They’re worth close attention and consideration. In many ways, the artwork is as strong and meaningful as the writing.

The novel’s humour ranges from raunchy to satirical to misanthropic. The Intercontinental Ballistic Dick Missile is just one of the many dirty jokes in Dirty Birds. The protagonist, Milton Ontario (yes, there’s a running gag about his name also being a place, and yes, the gag works), often plays the naive straight man in a love-hate relationship with his roommate, Noddy, who works as Milton’s crass, goofy counterpoint. At one point, the two are at a party when Noddy begins to hump a chair—like so many of us would. The chair collapses under his weight, and the room goes silent, except for Noddy who can’t keep himself from laughing. Noddy’s behaviour borders, at times, on a caricature of Newfoundland masculinity, but Murray consistently finds ways to undercut this representation and in doing so develops one of the more interesting comedic characters in recent memory.

The most compelling aspect of Murray’s humour is his sneering take on the artist novel, which often features a sad young man who takes himself too seriously as he pines for an elusive, free-spirited young woman. Murray takes these tropes and sets them on fire. Yes, Milton is a sad young man, but he becomes a drug dealer who starts a riot and nearly kills Leonard Cohen. Robin, the love interest, is elusive and free-spirited, but she sleeps with Noddy and has a porn-star boyfriend in Miami.

The protagonist doesn’t always win the love interest in a typical Künstlerroman, but he usually learns something through prolonged suffering. In Dirty Birds, however, suffering is meaningless. Milton never really overcomes his hardship with any sort of triumph. He simply continues to suffer until the novel ends. Humiliation after humiliation is dumped onto Milton, leading Dirty Birds into the territory of farce. Milton is a likeable, engaging protagonist, but he can be hard to watch. Each of his fumbling attempts into adulthood is cringeworthy, but Murray’s quirky humour and brilliant sketches made me want to keep reading.

The Künstlerroman is important for a variety of reasons, chief among them the way it attempts to synthesize art theory with the artist’s life. For me, Murray’s novel draws parallels between art and evolutionary biology; specifically, in the way certain animals develop traits that allow them to thrive in their environments. A turtle with a hard shell can survive a shark’s bite, for instance, but a turtle with soft shell gets eaten. In a similar way, there might be one poet who has a gift for expressing emotive language and who sees the world shrewdly, and there might be another poet who is unable to shake their idealism. One thrives and the other one—well, whatever the equivalent of being eaten by a shark is in the art world—gets destroyed by Leonard Cohen in front of a live audience.