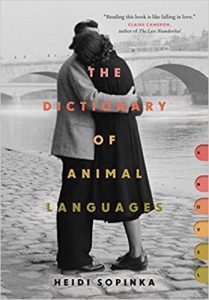 Animal sentience has become a hot topic in recent fiction, and none too soon. At a time when science is showing that animals do indeed have language—a recent study of canebrake wrens suggests that birdsong is governed by a complex, learned set of social rules, much like human communication—it’s encouraging to see more fiction that attempts to put aside human centrality in order to engage more deeply with the lives of animals. So it was with keen interest that I began reading The Dictionary of Animal Languages, Heidi Sopinka’s debut novel, which arrived accompanied by lavish praise.

Ivory Frame, a ninety-two-year-old painter now living in the south of France, is hosting a visitor, an old friend and former Yukon bush pilot named Skeet. These early pages make no concessions to the reader—we navigate the slow reveal of allusive, unpunctuated dialogue and the first-person narrator’s thoughts as Skeet performs the simple actions of making breakfast. Ivory, we learn, is terrified that she’s running out of time to complete her life’s work. She’s spent decades collecting and recording animal and bird sounds, and each chapter is named for one of her investigations. The first is Pigeon, with an epigraph that might be a file label or notebook comment: “Columba livia domestica; eating bread left by a homeless man + raw field recording of rain.”

The chapter’s striking language both echoes Ivory’s work—“The sky is saturated and smooth as stone, cut through with small grey wings,” she observes, driving home in her car—and hints at the imminent upending of her life: “A letter is pulled from a postbox and everything is pulled with it.” The letter she’s received out of the blue advises her she has a granddaughter—an impossibility, as she has no daughter. An inexplicable mystery, a fascinating life story, a vivid opening set-up—we’re primed for the unfolding of a thoroughly involving story.

Unfortunately, that’s not what happens. Despite the reader’s curiosity about the letter, this plot strand is abandoned for much of the book. Instead, Sopinka opts to tell most of the story in flashback. We learn about Ivory’s life as a teenager expelled from convent schools, as a young artist in Paris, and as the mistress of an older Russian painter, Lev. Much of this history is told by Ivory herself rather than shown through active scenes, with the result that it’s both distanced and narratively slow. The dialogue between Ivory and Lev and between Ivory and her best friend, Tacita, is arch and mannered, and her own interior dialogue often overblown. “The truth anointed,” she says when she and Lev have sex. “The far, unlanguaged precincts where there is only feeling.” Really? What the book badly needs is more down-to-earth, enacted conflict between characters and fewer intellectualized reflections.

Most damaging is an almost complete lack of motivation. Although Ivory sketches animals at the Paris zoo and tells us how she misses them (from her childhood in England, apparently, though settings and timelines are often murky), we never actually see her in an early setting with animals, much less witness a growing obsession. The whole dictionary conceit, in fact, sits uneasily with Ivory’s real-life inspiration, the English painter Leonora Carrington, who similarly fled her wealthy family for Mexico and whom Sopinka tracked down and interviewed not long before her death at ninety-four. The real focus of the book is Ivory’s life as a painter and her obstacle-strewn love affair, with European history as the backdrop.

A third of the way through the book, a character asks Ivory what she plans to do with the dictionary. She wants to protect the habitats of these animals, she explains, but her work is about more than collecting data: “It involves releasing messages stored in the voices of animals that represent the memories of all we have lost.” It’s a haunting premise, but it remains unfulfilled. Overwhelmed by the author’s research, the novel is ultimately a collection of fascinating fragments—how reindeer use extra bones in their feet to make communicative clicks, for example. These details remain unintegrated in a novel that wants to be too many things—a homage to Leonora Carrington, a portrait of the artist as a young woman, a modern bestiary.

“Kill all your darlings,” Faulkner advised, but Sopinka is unable to filter out the significant details and deploy them in the service of believable, developing characters. As a result, we’re unable to actually enter their lives and share their emotions. The animals in The Dictionary of Animal Languages simply become another strand in a far too cluttered story. And that’s a shame, because there’s another novel buried here, one in which the animals really do occupy centre stage in all their splendid otherness.