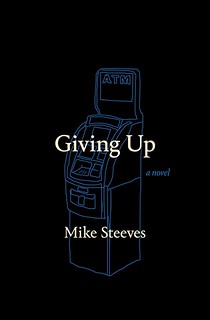 Mike Steeves’ debut novel, Giving Up, takes readers inside a tense relationship. It has three sections focusing on events that take place on the same night. Each section is presented from a separate point of view and takes the form of a single paragraph, within which Mary and James circle around their own set of concerns and anxieties. The layout brings to mind, among other examples, Thomas Bernhard’s novels and William Gaddis’ Agapē Agape; the content will be familiar to anyone who has been in a committed relationship that hit some bumps.

The first section tracks James’s thoughts as he contemplates his mysterious life’s work. He considers the obstacles he places in the way of completing this “something extraordinary” that he’s been labouring on for twenty years, and his avoidance of the “traps” he believes Mary “is constantly setting” for him with her remarks and questions. He then thinks of the break he made from his work on the night he met a conman (who divested him of $400), and his return home.

The “Mary” section is about what she does online that same evening. She experiences misery over seeing Facebook pages of friends with happy lives complete with children, as this triggers a sense of absence in her own life (she has been trying to get pregnant with James). She also reflects upon James’s deceitful character, the sudden presence of a cat that’s broken into their home, and her violent response to this creature’s presence.

“James and Mary,” the final section, takes place later on the same night, bookending the argument that occurred before the book opens and uniting the two characters as they explore what each has gone through. All three sections feature tense exchanges, where James and Mary doggedly question each other. Both feel hounded.

Mary’s remark that she can’t trust anything stems from an analysis of her reproductive possibilities, but it soon becomes apparent that her lack of trust applies generally: to her “friends” on Facebook, to the evidence of her senses, and to James and their relationship. It is also a theme that the novel explores in other ways. James’ section begins “The world is full of uplifting stories…” and Mary’s second thought is that “For some reason we treat it like it’s a big secret” (“it” referring to the difficulty in becoming pregnant). Both statements indicate different approaches to reality: to tell stories and keep secrets. Despite the occasional heartfelt and sincere admission we are led to wonder: What can we trust?

Paradoxically, Mary has few problems in knowing what she can rely on:

[James is]  into nuance, the grey area. I’m more of a black and whiter, myself. I know that the world is really complex and that nothing is ever one hundred percent, that you can’t ever really know the truth about anything and all that crap, but that’s not really how it feels. For me, there’s not a whole lot of complexity. There’s zero nuance. The feeling I have pretty much all the time is that the truth is staring me directly in the face, like right up in my face, breathing all over me and looking deep into my eyes, and just like in real life, if someone is standing that close with their face pressed up against your face so that your noses are touching, looking you right in the eye, it’s only natural to look away.

Mary pits intellectual processes against emotions, and this results in a predictable conflict: her logical mind wins the battle, but the war was won by feeling a long time ago.

On the thematic and structural level, Giving Up represents a similar struggle by placing the characters in specific, symbolic locations. The epigraph to the first section, by Søren Kierkegaard, says that people with houses “prefer to live in the basement.” This is where James spends his time working on the life-consuming project that Steeves rightly leaves mysterious. (The couple’s occupations are similarly undefined, but we get the impression that they are confined to offices.) James despairs at the thought of tying himself to an unrealizable achievement – “Basically I have been wasting my time…” – and there is a certain amount of self-abasement, as well as self-pity, in his underground environment. These feelings, combined with his distrust of Mary, his awareness that he lies to her, and his knowledge that she knows he lies, take up much of his section; the rest is given over to his belief in and acceptance of a conman’s ludicrous story involving a money order.

Aside from the street scenes, it’s only in the third section of the novel that we see James come out of the basement. In contrast, Mary’s section is set on the main floor, and includes all of her debilitating interactions with Facebook and her attack on an unknown cat.

The set-up is deliberate: basement versus first floor, the unconscious and unexamined mind versus the conscious and analytical. Mary’s words about the absolute nature of Truth gain resonance from this classic confrontation between desires and appetites and an examination of their relationship. While the two levels (or stories) in their home intersect, especially at the end of the novel, as spaces packed with symbolism they cannot individually offer the possibility of full understanding.

We learn things from Mary’s account that are unflattering about James. Apart from her mistrust of him, Mary dislikes that he pretends to want a child as much as she does. The endless campaign to have a child requires sex every day, an activity that never enters James’ narrative, but though they fail, day after day and year after year, she rejects his suggestion that they see someone who could find out what might be the impediment. “Instead of telling him the real reason I’m reluctant to go see a specialist, I make something up based on opinions and beliefs I don’t possess but that I know from experience will drive him into an exasperated rage.” Mary, who never reveals her real reason, and who plays as fast and loose with the idea of candor as James, is driven by his pattern of random lying (on viewing porn, on eating out, on his life’s work) to diminish him. To her he is “needy,” and Mary deploys a word that for some time has been condoned when applied to women: “I end up saying the very thing that will make him hysterical.” The key word there is always; she regularly pushes him into a defensive posture, which he abets by refusing to reveal his fears and motivations. Yet she also tries to back away from the domestic scene she has depicted: “But now that I’m telling this I feel like I’m painting an ugly picture of our relationship. The majority of the time we’re great.” But the ugly picture comes across as more truthful than her explanation.

The emotions present in both streams of consciousness are set down by Steeves in sentences that appear to flow naturally in voice. Here is James as he listens to the conman tell his endless fabrication:

‘This must be what it’s like for my friends and family,’ I thought. ‘They must get embarrassed when they have to listen to me go on about my life’s work. They know that I’m lying when I tell them that I think I’ll finish the project that I’m currently working on in another year or so. It’s painfully obvious to my wife that I am conning her, putting one over on her, so to speak, when, after a doubly wasteful and destructive day down in the basement, I tell her that I got a lot of work done.’

And here is Mary: “… at that moment what I truly believed in my heart of hearts was that this cat was deliberately messing with me, or that someone had sent it in order to mess with me.” Despite the stated feelings operating on the surface, and the necessarily repetitive nature of their voices, their upset and fears are carefully phrased, and expressed in an orderly rhetorical fashion with well-balanced clauses showing no signs of hesitation or error of speech. The repeated use of the word that, for example, establishes a coolness in the lines that keeps emotional engagement at a distance. Such well-organized sentences may not bother readers just thankful to read articulate thoughts, but others may find that they vitiate Steeves’ attempt to describe the ebb and flow of the feelings of a miserable couple.

The authorial style takes over at the end of Giving Up. In “James and Mary” the ambiguities of the first two sections gradually are replaced and answered by a voice that has only rarely occurred previously. One sees, with a sense of disappointment, signs of a tidy and unearned rapprochement approaching well out from the last pages. Both characters finally express a small amount of what has been unsaid for so long, indicating a shift from their habitual ways of speaking and listening. As they are maneuvered into seeing what their chief problem is, and with time running out, there arrives a contemporary version of the deus ex machina: a doorbell ringing at midnight marking a magical, mystical cutoff point. Afraid, James and Mary retreat to the basement and have make-up sex before thinking about returning upstairs to face the stranger at the door, whether it be the cat owner, the conman, or the police. In this final section elaborate rationales are provided, and there is an all-knowingness in the narrative voice that works against the fumbling and self-deception that Mary and James exhibit.

Mike Steeves’ awareness of what couples do within a relationship, and his effort to capture domestic politics, complete with all of its twists and stories-within-stories, is admirable. And Giving Up contains some home truths. But the novel could afford to be more unkempt, and its sentimental conclusion removes its harshness and momentum. A history of compulsive and obsessive behaviour, ceaseless lying, paranoia, and hopelessness can’t be offset by one fear-filled fuck.