By Emily Donaldson on December 12, 2016 Reviews 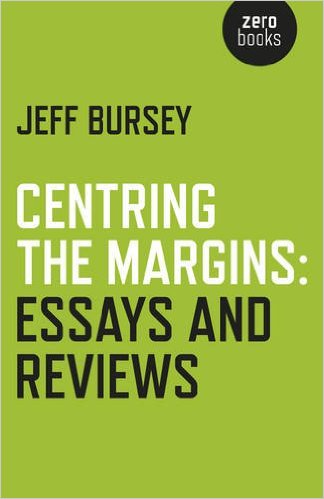 Many years ago, as a graduate student of English, I was told something about where the discipline was headed by one professionally minded (but not cynical) academic. “You have to be on the margins,” he said. “That’s where the action is. If you’re not on the margins, you’re nowhere.”

By the margins he meant the space that was becoming exclusively occupied by identity politics. The Dead White Men of the unholy patriarchy were the centre, so being on the margins was the result of having been forcibly marginalized or oppressed. The “action” was all about identifying with minorities and victim groups.

Jeff Bursey is a survivor of a graduate English program but the title of this collection of critical writings, Centring the Margins, indicates something very different than a rush to where the action is. For Bursey, the marginal is associated more with aesthetics than politics. At university he was subjected to a conservative curriculum that “reflected staid, English, or with-it taste that would never really upset anyone or anything.” This is what constituted (and perhaps to a large extent still constitutes) the core, the canon, the centre. After an awakening brought about through exposure to the writings of Henry Miller, what Bursey as essayist and reviewer wants to talk about are obscure or neglected figures, writers who seek to innovate, explore, experiment, and challenge readers by daring to be unruly and difficult.

A clear statement of Bursey’s own marginal aesthetic credo, and its rejection of what we might paradoxically refer to as orthodox marginalism (not the same thing as political correctness, but bearing some relation to that label), is laid out in his review of Herb Wyile’s Anne of Tim Hortons: Globalization and the Reshaping of Atlantic-Canadian Literature.

When it comes to aesthetics, this book resolutely shies away from declaring that a novel is good or bad or inferior. The roaring of those “political, social, and economic” engines largely has drowned out the poetry and the craft of the writers Wyile has chosen. He does a good job elucidating novels and plays (a welcome aspect) on the topics that concern him, but do these books have intrinsic properties that make them Art? The books chosen, or at least some of them, took effort on the part of the writer as he or she fashioned a sentence. By leaving out the aesthetic qualities of the books under consideration, and concentrating on class, race, gender issues, and consumerism, Wyile leaves untouched a pertinent question: If the books aren’t artful, how will they do whatever he wants them to do? They might as well be tracts left to molder on a doorstep. Wyile’s earnestness, coupled with his thesis, tells the reader little about the literary aspect of literature.

Bursey’s preferred approach is, in relation to our dominant modes of critical discourse, marginal: it’s basically in line with what John Metcalf dubbed the “aesthetic underground.” This is a method that enjoys no favour in academia or the media today, such practices as close reading and value judgments being now viewed as archaic, misguided, and unworkable. The “literary aspect of literature” is no longer the province of the professional critic.

This critical marginality is, in turn, addressed to what are – and I say this without prejudice – a number of marginal authors. The titles Bursey reviews here are, for the most part, well outside the mainstream. They are not award winners or books by established, canonical names but more often works in translation and/or the products of small presses. As already noted, Bursey prefers books that challenge, experiment, and take chances rather than those with mass appeal and genial charm. A more poetic approach is commended over the verities of staid realism. Steven Galloway’s Ascension is finally damned for being written in a style of “earnest fidelity” and “flat verbal photographs” that is “all net, no wire,” while Michelle Butler Hallett’s “particular kind of realism” in Double-Blind “is objectionable because it clearly overlooks the more tender aspects of life, and relegates much of the world’s artwork to the ashbin.” Of course realism is a difficult term to pin down, but in insisting on an expansive definition that includes spiritual values, Bursey does no harm.

Many of the names surveyed I freely admit to never having heard of. This isn’t a problem, indeed it might even be considered a good thing, but if Centring the Margins comes up a bit short in anything it’s in not making me want to seek more of them out. While Bursey’s championing of obscure titles performs a valuable critical service, and he is always an insightful and well-expressed advocate, I came away unconvinced that the conceptual author Davis Schneiderman really needs my attention, or that Marja-Liisa Vartio’s The Parson’s Widow would be worth the hard slog Bursey admits it to be. But to each their own. Though often constrained by the limits of the review form (his longer pieces are the best), Bursey does make a respectable case for and against the objects of his attention.

Another point – that’s again more of a personal response – is that Bursey doesn’t spend more time dealing with Canadian writers and the Canadian literary landscape, and examining the question of where and why Canadian literature rates in his scale of values vis-à-vis the rest of the world. To be fair, Centring the Margins doesn’t attempt an overview of contemporary Canadian writing, so I don’t want to take it to task for being something it never intended to be. That said, Bursey is, as his introductory remarks lay out, very much a product of (in the sense of a reaction against) our home and native cultural environment and its conservative values. Which, I think, is something both ironic and germane to his thesis.

Canadian culture has always had a special relationship with the margins. It begins with the fact that Canada is a marginal country, literally appearing as such on the map: a ribbon of population stretched out along the border with our imperial neighbour. Our cultural productions have been almost by definition marginal, at least in terms of audience and influence, to what has been the dominance of British and then American literature, music, and film both in this country and globally.

Within Canada, however, we have the phenomenon I’ve already mentioned, orthodox marginalism, with its own critical and cultural establishments. Bursey is, in Canada, a marginal critic. His aesthetic approach is marginal to the identity politics of the academic-media mainstream and his reading interests are marginal, bordering on invisible, to the public taste. It is precisely this that makes him essential. The centre of Canadian culture is a hole being dug to nowhere. Bursey’s criticism isn’t another shovel but a rope.