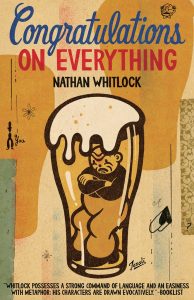 Congratulations on Everything,
by Nathan Whitlock
ECW Press,
(315 pages)

In Nathan Whitlock’s sharply funny second novel, Jeremy is the owner of The Ice Shack, an unassuming neighbourhood restaurant-bar in Toronto. Happily installed in his little fiefdom, he refuses to notice the bar’s slow stretches becoming longer, the weekly takings lighter. Charlene is a passive, depressive thirtysomething lunch waitress in the worst kind of marriage. It’s not good, but neither is it bad enough to motivate her to leave. The emotional skirmishes between these two damaged characters will be enough to shake up the Shack, and possibly their lives.

The Toronto-based Whitlock (his first book was A Week of This) writes the kind of prose that at first seems breezy, with easy, unforced dialogue and laugh-out-loud comic description (Congratulations on Everything has been described as “Cheers-meets-The Office.”) But there is a melancholy undertow to this story. Starting out as a smart satire on the restaurant business, the novel ends with a feeling examination of self-help, self-delusion, and the stories we tell ourselves to get by.

Jeremy is “on the edge of 50” and still keeps the keys from every job he’s ever had in his long service-industry career, carrying them on a chain at his waist. He’s a true believer in (fictional) motivational speaker Theo Hendra, whose boosterish aphorisms act as the novel’s chapter headings. (“GETTING OLDER IS NOT ABOUT CLOSING DOORS, IT’S ABOUT LEARNING TO OPEN WINDOWS”; “DISAPPOINTMENTS ARE ARROWS, NOT STOP SIGNS.”)

Jeremy is completely wrapped up in his life at the Shack, leaving late and coming in early after a few hours of snatched sleep at his empty house. Whether this is pure, unselfish devotion or some kind of strange evasion is at first not clear. Whitlock, who takes an empathetic approach to his finely shaded characters, seems to suggest it’s both. Charlene sometimes watches Jeremy “walk around the bar, taking an obvious delight in the spread of tables and chairs, looking into every corner. He did the same behind the bar, staring at the draft taps and sinks with an expression that was boyishly erotic.” He loves his touchy, temperamental kitchen staff and his sad-sack regulars. The Shack is Jeremy’s true home, but it’s also ominously perched on the edge of a steep ravine, with a precipitous drop-off that will (inevitably) transform into an existential abyss before the novel’s end.

Jeremy is also deeply invested in the idea that he’s a good guy. And in many ways, he is a good guy. He’s generous, funny and easygoing, even under restaurant-emergency pressures. On the other hand, his repeated insistence on his good-guy status starts to look suspicious.

Pathetically desperate to be known as a “cool boss,” Jeremy is the kind of employer who doesn’t mind if the staffers want to smoke a joint outside the back door after closing: “He lived for this kind of casual charity, this display of benevolent power.” He has strict rules for his own personal and professional conduct, like that one about never sleeping with female employees, which he keeps – until he doesn’t, stumbling into bed with Charlene after a drunken birthday party.

This brief encounter wrecks the pair’s equilibrium. It is some time before the two can “talk again during the day without acting as though one might suddenly jump up and burn the other with a lit match.” Meanwhile, Jeremy is falling even deeper into a financial hole. Whitlock uses dark comic irony to expose the gap between Jeremy’s shining self-image and his increasingly shifty actions. Having already used emotional extortion to wangle some money from his aging parents, he starts to take an unseemly interest in friends’ and family members’ inheritances, insurance settlements, and workers’ compensation payouts. Even worse, he makes it seem as if sinking their money into an increasingly rundown and possibly failing bar would be a blue-chip investment.
The one man who actually wants to invest in the Shack is Stuart, a lawyer whose motives seem murky. Stuart favours management-speak about branding and long-term planning and being “more selective and more strategic.” He chides Jeremy for “turning the place into the Island of Misfit Toys.”

Running alongside this subplot, Charlene’s one-night stand with Jeremy has tilted the balance of her failing relationship with her husband, Kyle. Prickly, rigid, defensive, and “fundamentally incapable of shooting the shit,” Kyle could have easily been turned into a “sacrificial spouse” character, but Whitlock’s even-handed and emotionally generous approach renders him oddly sympathetic.

The bald outline of the plot might sound mopey, but Whitlock is a punchy comic writer. Fretting about aging and death, Jeremy attends his first medical examination after his fiftieth birthday and finds to his dismay that his “prostate had become an area of interest, like a tract of unspoiled land suddenly getting noticed by developers.” Charlene recalls an old boyfriend who would insistently guide her hands to his penis: “It made her feel like Helen Keller, with her clumsy hands on the water pumps.” Paragraph to paragraph, the writing is tight, fast, and observant.

Chapter to chapter, Congratulations on Everything can sometimes feel stalled out, mired in details and day-to-day dealings. In fact, Whitlock is sneaking up on the reader. He’s not interested in huge catastrophic events but in the steady accumulation of recognizable, run-of-the-mill problems – love going stale, work becoming irksome, friends falling away, families arguing over money. He carefully catalogues the habits and engrained beliefs that keep his characters stuck, while holding out some hope for minor epiphanies.

It feels like a pointed joke that Charlene is attempting – and repeatedly failing – to read a book that’s the antithesis of Congratulations on Everything: “It was the size of a small briefcase, and so heavy it made her wrists ache when she held it. It was about three families in India. No: Pakistan – she kept getting it confused.” It involves angry sons and motor-scooting widows and Islamic radicals and terror bombings and impossible coincidences.

In fact, Whitlock’s deliberate embrace of the ordinary and everyday might be the freshest thing about this novel. The Shack is clearly not a hipster joint but a wonderfully average bar, where softball teams go in their uniforms after games and the stereo plays Tom Petty. References to “the mayor” who has come in and had his photo snapped seem to suggest a Rob Ford-type vibe. This is the unglamorous end of the service industry, and that feels like a rare subject. There are novels about the upper classes and novels about the over-educated, underemployed creative classes (say, the kind of people who might have passed through the Iowa Writers’ Workshop). There are occasional noir-inflected incursions into the underclass. But there seems to be a shortage of novels about regular people with regular jobs.

As Theo Hendra would say, in his all-caps way, “SOMETIMES LIFE IS TOO MUCH.” Certainly, in Whitlock’s hands, two small lives, with their quotidian dreams, frustrations and failures, offer more than enough material.