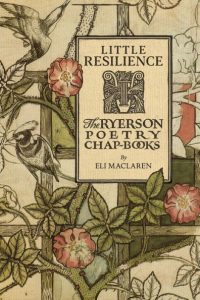 So many poets begin their publishing careers with a chapbook: Irving Layton and Margaret Atwood, W B Yeats and Ezra Pound, William Carlos Williams, Dorothy Livesay, Raymond Souster—the list is long. UNESCO defines a chapbook as a bound book of fewer than forty-nine pages, but many are in fact much smaller. Rimbaud’s Season in Hell is slightly too long to be called a chapbook, but the first books of Blake and Shelley definitely qualify. Early chapbooks are frequently self-published and often, in retrospect, rejected by their authors as part of their personal canon—Pound called the poems in his first chapbook “stale creampuffs.” They sometimes disappear from the record and often disappear from the book trade. If they resurface at a later date, when the author has become famous, they can fetch fantastical amounts of money as collectors’ items. (A copy of Pound’s 1908 A Lume Spento sold at auction in 2017 for US $35,000.) The poems they make public are usually juvenilia, but they give their authors that first sensual thrill of publication.

The Canadian literary record contains thousands of chapbooks, but none is perhaps as famous as the Ryerson Chap-Books, a series of slim poetry pamphlets that Lorne Pierce, the Ryerson Press editor, brought out between 1925 and 1960 (with an outlier in 1962, after Pierce had died). There are 202 of these chapbooks. Many if not most of them are by poets whose names have all but disappeared into oblivion, but some are by poets as well-known as Charles G D Roberts, Dorothy Livesay, Louis Dudek, and Al Purdy. The edition size was usually 250 copies—occasionally it was fewer and occasionally it was as many as five hundred—and many of them were what another contemporary Canadian publisher, Macmillan of Canada, always called “authors books,” which is to say that the author either paid for it or guaranteed Ryerson against any loss. Such small editions of such tiny books might seem unlikely to have any influence whatsoever, except among the authors’ friends. But it is Eli MacLaren’s contention that the RPCs were in fact quite important in Canadian poetic history. His main theory is that they were a locus where older-fashioned romanticism and newer-fangled modernism could meet, protect, and greet each other. There seems little doubt that this was the case. The earlier RPCs were almost exclusively in an older vein, even as international modernism was by then well established in the work of poets like Pound, Williams, Eliot, and Stevens. But to Pierce’s credit, and with a little nudging (as MacLaren shows) from people like E K Brown, poets who had read their Eliot and Williams gained a spot on the RPC list later—Souster, Dudek, Purdy, and Milton Acorn being the prime examples. So too did poets who combined a reverence for the tradition with devotion to a more contemporary poetics, such as Douglas Lochhead, Elizabeth Brewster, or Frank Oliver Call, the Quebec-based Imagist poet.

MacLaren’s book is much more than just a dossier of proof for that one contention, however. Individual chapters devoted to the poets Nathaniel Benson, Anne Marriott, M Eugenie Perry, Livesay, and Purdy (you are forgiven if the first and third of those poets are unfamiliar to you) explore how their appearance in the RPC series was crucial to their literary development. MacLaren also indulges in a fair amount of poetic analysis of individual poems, even of poems that he has resurrected, Lazarus-like, from death, or at least total obscurity. His analytical skills are substantial, and it is a pleasant change to find a critic who really knows poetic techniques and is willing to explore poetry at the level of music and effect, as well as affect. Little Resilience is refreshingly free of jargon, apart perhaps from MacLaren’s occasional overindulgence in the vocabulary of rhetoric. (We hear about anacoluthon, polyptoton, asyndeton, phonoaesthesia, and many other terms.) MacLaren also has an odd aversion to the word “previous,” always using “prior,” which occasionally sounds strange. He’s also clearly musically trained, but I have to wonder whether Dorothy Livesay’s Call My People Home really was compared to Richard Strauss’ tone poem Ein Heldenleben. If so, I can only say, “What?!”

Little Resilience is proof of the author’s great research skills (not only in publicly accessible archives but also in personal papers that are still privately owned, like those of Nathaniel Benson), of his sensitivity to poetry at a profound technical level, and of his deep knowledge of Canadian literary history. Anyone interested in Canadian poetry will find it stimulating and compelling; and even the most knowledgeable will learn a great deal about poets who previously were just names in a library catalogue.