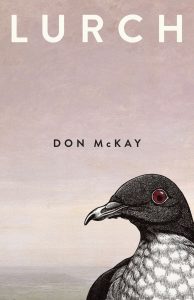 Despite his roots in Romantic and Neo-Romantic poetry (his PhD dissertation was on Dylan Thomas), Don McKay’s poetry almost from the start has paid attention to the naturalist’s world, the world of birds and flowers and rocks, of lichens and wind and trees. His poems are a bit like Group of Seven paintings in that the depiction of human beings is a rarity. McKay as the poet is certainly present, and he is not just a pair of eyes or ears. Even in the first poem in his new book, entitled “Larix” (the Latin name for the larch or juniper), McKay’s “I” is there, not just observing but positing human analogies for natural objects. Of the annual fall loss of the larch’s needles, he writes:

Each autumn I anticipate their shift, and each
year, somehow, I’m surprised, as when a chorister
steps forward to become a star.

There is even occasionally a “we” in these poems, such as the couple or group (it isn’t clear) who, in “To Speak of Paths (2),” “bushwhacked from the river up / through the blow-down from the latest hurricane” and, among other things, come on a bird’s nest “filled with snow as though / to nurture winter.” That is a human world analogy too, but somehow less jarring, which McKay’s comparisons can often be, as when he describes elm trees that have perished from Dutch elm disease as being like “disgraced clergy still hanging around the church” or rotting tree stumps as “Beethovens of decomposition.” Oddly, these over-engineered bits of poesis work best when they are at their most outlandish. Here he is describing the sound of a river, for example. “It lisps,” he says,

as though calling language
back to babble and babble back
to burble and burble back to Bach’s
keyboard concerto in D minor as
recorded by Glenn Gould with the
Columbia Orchestra under Leonard Bernstein
when the whole philharmonic kit
and caboodle went skinny dipping
in polyphony.

What can one say to that except “Wow.”

But in truth I think McKay demonstrates how great a poet he is in less bravura passages, when sprezzatura rather than braggadocio is at work in the language. The title poem, which is given a section all to itself despite being only six stanzas long, with a one-line coda, is a masterpiece of understated poetic music. Rhyme, slant rhyme, and internal rhyme combine in this poem with a regular four-line stanzaic structure to create as fine a meditation on our place on Earth as I’ve read in a long time. The poet and someone else sit on an outcropping of rock, “bare / except for blueberries and black flies,” contemplating the moonrise over the sea, imagining how Homer would have done the same. The scientist in McKay knows that the moon is just a piece of rock broken off from Earth during the Archaen Eon, two and a half billion years ago (“this lit-up biosphereless bit / of its Archaen self”), but that there remains a deep mystery in seeing it anyway, and “Who can sing the mystery of what actually occurs?” That is the poet’s challenge. The poem concludes by evoking loss and with a nice pun on gravity/gravitas:

Moonlight swam across the waves and stepped ashore, unfazed by flies,
naked as a blueberry, easily enchanting every thing it touched with Bloss.

Who can sing such weightless gravitas?

McKay’s style ranges broadly, from pure prose to the grave formality of “Lurch,” to a much slangier tone of voice that sometimes seems not so much inauthentic as overly cute. In a poem about the Cretaceous-Tertiary Extinction, the final sentence contains references to both a “blessèd asteroid” and “our green and pleasant, if now pretty / iffy, biosphere.” “Blessèd” and “iffy” feel ill assorted. A short poem entitled “Song for the Song of the Catbird” reads like Dennis Lee at his jazzy improvised worst. And the scientific subject matter occasionally leads McKay to condescend, as he does in an otherwise very moving poem about the discovery of a grave containing a Neanderthal child. Neanderthal, he explains in the poem, comes “from Neander Vale, site / of the first remains we found.” Yes, the reader wants to say, I knew that already, Don!

These little nags notwithstanding, Lurch contains many finely made and compelling poems. Any poet who can look at the soil and see “the ecstatic, indecent,/death-dissolving dance that will one day/gather us up” is talented and profound indeed.