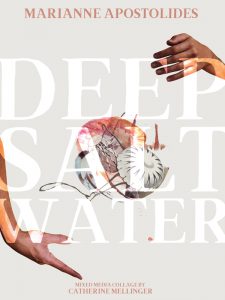 It would be hard to overstate the chances Marianne Apostolides takes in her new memoir, Deep Salt Water, which twins the story of an abortion with another, more terrifying and more cosmic story, of the ruined oceans and the mutant fish that inhabit them, coral reefs turning to bone, gyres of plastic. In short, civilization’s great ecological catastrophe.

Abortion and environmentalism are difficult things to say anything interesting about. In the first case, because writers tend to slide into bland sloganeering, and in the second, because the scale of the destruction we are facing is so appalling it’s difficult not to succumb to nihilism or platitudes. Abortion is such a basic and yet such a fragile right, most treatments of the issue from progressive perspectives (and I will not deign to speak of those which are retrograde) are liable to become case studies for its inalienability. Likewise, most people writing about the vicious ecocide we are currently presiding over do so because they want it to stop, and think it can be stopped.

Which is just another way of saying that abortion and environmentalism are topics about which it’s impossible to have an apolitical opinion, and that, in the humble view of this reviewer, most political opinions are crude and predictable. Politics requires the flattening out of complexity. It requires clear narratives and clear choices: socialism or barbarism, freedom or slavery, good or evil. Without such flattening out, it’s all but impossible to mobilize large numbers of people. But if politics offers us the tempting but necessary illusion that if we band together every problem can be solved, art (like law) picks up where the idealism of politics leaves off: with the mess of individual lives.

Structured in three parts mirroring the three trimesters of a pregnancy carried to term, Deep Salt Water tells the story of an abortion Apostolides had at the age of twenty-three, following a brief, intoxicating affair with a man she met at a conference. Choosing to have the abortion puts a strain on their budding relationship. Therapy doesn’t help, and both end up marrying and divorcing other people. Apostolides has two children. The man’s wife miscarries. Seventeen years later, they meet again and try to work out exactly how they feel about what happened.

Over the course of a now six-book career, Apostolides has established herself as a writer who takes on the most intimate, perverse, and complicated elements of human desire fearlessly and intellectually (her last novel, Sophrosyne, is about a young man who mourns the dead mother with whom he had an incestuous relationship by writing an essay on Greek etymology). She has a slightly terrifying ability to ride the most emotionally charged idea to its devastating conclusion.

Deep Salt Water does have its lapses. Clichéd and bathetic lines like: “‘Language’ is easy. It’s human that’s hard,” or the even more regrettable “All that remains when we die is a poem” overshoot the mark. But perhaps, given the emotional tautness of the work, they can be excused as the forgivable excesses a writer risks when doing anything really interesting.

Apostolides’ meditations unfold in thirty-seven fragmentary sections (another nod to the course of a full-term pregnancy), with the narrative dancing forward and backward through time in a series of prose-poem entries. A single sentence can encompass a dozen years. At other times, the factual and the imagined blend and recombine in ways that make it difficult to know where narrative ends and fantasy begins. When one’s material is one’s recollections this is of course not easy to avoid; like memory itself, Deep Salt Water is circular and digressive, obsessive and sensual. Consider the following example, from fragment #13:

…I must try to keep my mouth above water. Remain on my back, with the air, with the plankton. But plankton are causing deoxification. They’re growing too thick: the same life that gives breath can then take it away. This is all out of balance. Too much too soon—

You sat back: “That’s provocative.”

Writers have been using the social to shed light on the individual since Plato, but what makes the interplay between oceanic deoxification and Apostolides’ own emotional asphyxiation so compelling isn’t the fact that she uses the former as a metaphor for the latter; instead, both deoxification and the breakdown of her relationship reflect a deeper, more ineluctable truth: that every good thing contains its own evil.

If the personal is political, the political is also personal: Apostolides cannot escape her belief that the foetus she aborted in her early twenties was a child. Not in any sort of didactic or philosophical sense, but viscerally. “It’s the abortion—the surgical abortion—that made her a child,” she writes. The child is constituted as such by the way in which it is negated, which leads Apostolides to a series of challenging propositions:

What is the language to talk about abortion? The language of “rights” is too limited: its logic and lawfulness place it firmly within the mundane. The mysterious crux of abortion, therefore, is denied. But the language of “ethics” is slippery, sliding—so easily—inside the throat of religion. Unable to find the proper words, my only recourse is this plea: the prayer that someone will offer forgiveness.

This desire for a forgiveness that simultaneously refuses anyone’s (her partner, herself, God) right to offer it is the book’s unresolvable paradox.

It’s a paradox mirrored by our destruction of the oceans:

The chemical cause is carbon dioxide from fossil fuels.

The actual cause, of course, is us.

The ocean is dying because humans are a singularly successful species. In our efforts to live longer, reduce suffering, improve our diets, we have pumped carbon into the atmosphere and nitrogen into the oceans. “We only intended to make ripe tomatoes,” Apostolides points out. And in this reckless pursuit of the good of our own species, we are overseeing the sixth extinction.

I finished Deep Salt Water while on assignment in Tanzania, where I was writing about a development project the Canadian government is funding for maternal and newborn health in the country’s Masasi and Lindi regions. Better access to healthcare and greater food security have been important contributing factors to country’s current population boom: seventy-eight percent of the country’s roughly fifty-five million people are under the age of thirty-five.

On the last day of the trip, I found myself in Dar es Salaam with a couple of hours to spare, and wandered down to the beach. The high water line was marked out with plastic bags and garbage; the ocean breeze had a complex, fecal smell. Off the coast, I’m told, are extensive oil reserves. Many of the Tanzanians I spoke with are hopeful that revenues from these reserves will help support the country’s woefully underfunded healthcare and education sectors. After a week touring healthcare projects in small villages in the south and seeing the conditions in which nurses and doctors had to work, it seemed impossible to begrudge a developing country this kind of stimulus, whatever my own reservations about the carbon economy.

These questions are existential as well as political, which is to say they are moral. They require action, despite their paradoxical nature. In the coming years, we’ll need more writers like Apostolides, who are willing to talk about morality without the security of moralism.