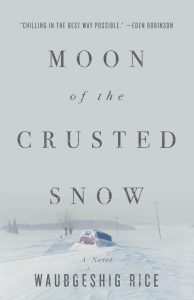 Have we reached peak apocalyptic lit? Some would answer that with an unqualified yes, but even the latter will want to make room for at least one more. Set over the course of a long, cold winter, in a contemporary but undefined year, Waubgeshig Rice’s Moon of the Crusted Snow centres around Evan Whitesky, his family, and the larger community around them on a small northern Anishinaabe reserve.

The book opens in late fall, with Evan hunting moose in preparation for the long winter ahead. As Evan utters an Ojibwe prayer over a fallen animal before butchering it, we get insights into his and his community’s relationship to food: how food brought in from the south is “expensive and never as good, or as satisfying, as the meat he could bring in himself.” We’re told, too, that “the thought of eating only packaged meat if all that game ran out made Evan shudder.”

It’s after driving his four-wheeler home to his family that Evan gets his first inkling that something is awry in the larger world. At home, the TV is off and Nicole, Evan’s partner, explains the satellite went out earlier. Over the next few days, cell service, landlines, power, and the internet all go out. The community initially doesn’t worry because outages are still common on the reserve, but the confluence of everything at once is rare and disconcerting. Evan and the others are launched into an eerie, cold silence. Before hydro’s recent arrival on the reserve, the community depended for its power on generators that now suddenly offer a lifeline. They formulate a plan to try to survive winter.

At first, no one has any way of knowing what’s happening down south or anywhere else, and Rice does a fine job of characterizing the reserve’s seclusion. Coupled with descriptions of the unrelenting wintery landscape, readers get a strong sense of just how isolated the community can be when everything goes down.

From here, the novel unfurls via two prongs. On the one hand, we’re presented with some classic apocalyptic scenarios: the community struggles to figure out what’s going on and tries to adjust to a life without amenities or communication, the grocery store gets cleared out by panicked shoppers, and survival becomes more important than anything else, especially as winter blizzards start to hit. Information starts trickling in from a few young people returning to the reserve by snowmobile from their studies down south. A few opportunistic white people also edge their way in, including Justin Scott, whose behaviour leads to some truly shocking moments as he capitalizes on the tragedy for his own personal gain.

On the other hand, Rice complicates and demands a rethinking of the apocalyptic category itself, which is the book’s greatest revelation and strength. The novel demands that we ask whether a concept like “apocalypse” can even apply to First Nations peoples who have already experienced great calamity and tragedy. Says Aileen, an elder, ‘The world isn’t ending … Our world isn’t ending. It already ended. It ended when the Zhaagnaash [white people]came into our original home down south on that bay and took it from us…” Moon of the Crusted Snow catalyses a different way of thinking about “the end of the world”: Whose world is ending? And from whose perspective do we see that end?

Rice’s writing is measured, and he has a lovely ear for the cadence of conversation—humour, rage, and introspection all coming through the dialogue. Despite occasional wooden moments, the narrative, for the most part, leads to insights or compellingly describes conditions.

Ultimately, Moon of the Crusted Snow hangs on its characters. There are some on the reserve who don’t handle the new circumstances well, but many, like Evan, are shown to be skilled, thoughtful, and relatively calm under pressure. We want to know what is going to happen to them, and it’s satisfying to find out. Societally and politically, we seem to lurch from crisis to crisis these days, and sometimes it’s only through literature that we find alternative perspectives. Rice’s story teaches, but it’s not didactic; it’s original, and somehow takes the frenetic pace of a crisis, slows it down, and shows us its parts.