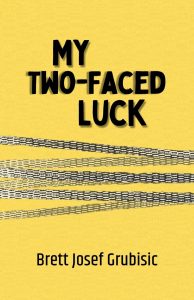 Brett Josef Grubisic has written gay male pulp for more than a decade, and edited the landmark collections Contra/Diction, and Carnal Nation: Brave New Sex Fictions twenty years ago—he knows the lithe and efficient plotting of hardboiled noir, and the sleazy amorality of its characters, but his latest novel, My Two-Faced Luck, though ambitious, fails at much of what he previously excelled at.

Faced with imminent death, a nameless prisoner in British Columbia’s Fraser Valley is recording his life story onto cassette tape, from his 1920s beginnings in a dull, mainline suburb, to his murdering of a well-known West Coast socialite in the early 1970s. In between, there are stints as a small-stakes crook in New York running correspondence to gangsters, as a secretary in DC, during World War II, as the servant of a socialite and her closeted husband, not to mention decades of social climbing in San Francisco.

This is not a dull story—though it has been told in more interesting formations. It’s disappointing to have a gay man write about another gay man being introduced to sexuality by being molested in the projection booth of a movie theater—more because of its cliché quality, rather than due to any sort of respectability politics. The whole book is only half committed to the potential of sleaze. Writing a noir about this kind of mountebank, and then trying to convince us that he’s actually a good person, when he very obviously is not, is an interesting moral position.

The problem lies in how he tells us this, which is via asides, stuttering gaps, and fill words—every page littered with phrases and terms like “I guess,” or “anyways,” or “boy, I didn’t,” or rhetorical questions to the reader such as “that sounds like a melancholy song doesn’t it?” or through clichés, “she acted like a cat with a mouse” or “money wasn’t a worry, doing sweet nothing in the land of milk and honey.” Some of this might come down to character choice—it’s a mediocre book because it’s told by a mediocre man; a book that is supposedly transcribed by someone who knows nothing, a kind of metatext, where the lack of self-awareness is infused into every page—but I’m not sure Grubisic is capable of committing to the formal expectations of the text.

The book has an introduction, in the form of a letter, layout out the premise of the book, and an afterword, restating this premise. Each transcript is laid down like a chapter, and the work is told in a conventional, forward-facing narrative style. There is little indication, except for the awkwardness of the prose, that these are transcripts. If one is going to write a gloss on a pulp, either the gloss has to be interesting, or the pulp has to be interesting. This gloss is a failure, and the pulp is not very interesting.

Reading this novel, I kept thinking about James Ellroy—and how much his explicitness about sex and violence, its high literary quality, becomes an analysis as much as a depiction. But Ellroy’s work is for straight men, by straight men. A gay male claiming of a history that is as much about the demimonde, in the Ellroy mode, would be deeply welcome. This is not it.