Robert Lacerte (or “Baloney,” as he’s known in the Montreal literary scene) has been a marginal poet his entire life – figuratively, yes, because almost no one has read the thousands of pages of poetry accumulating in teetering towers throughout his apartment, but also literally: he’s always finding himself wedged into narrow crevices. The second youngest of forty brothers, sisters, and cousins raised in a French-Canadian backwater village, Robert’s earliest memory is of sleeping in a crib tucked under a staircase. At fourteen, while spending the winter working as a cook and cleaner at a remote lumber camp, Robert and his coworker, Denis, had pushed their bunk bed into the pantry to avoid getting harassed by the lumberjacks, leaving Robert so little space between his mattress and the ceiling that he could hardly turn. Two decades later, when he’s volunteering at a Mexican cattle ranch after drifting through Latin America, Robert sleeps in a lean-to attached to the side of a stable. 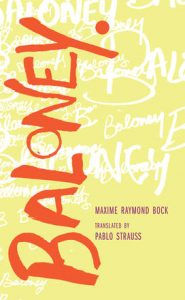 By the time he meets the unnamed narrator of Montreal author Maxime Raymond Bock’s novella, Baloney, Robert is sleeping in a sliver of space in one of the bunk beds he’s acquired to store his poems. The narrator, a novice writer with two young kids and a wife, is looking for a way to start writing again after several rejected poetry manuscripts and a largely unnoticed collection of stories. He encounters Robert at open mics around Montreal and they get acquainted over pints.

As he details the struggle to balance his own responsibilities with looking after the older poet, who is dying of cancer, the narrator recounts episodes from Robert’s life with the affectionate but skeptical air of someone who has heard too many versions of these stories to believe them.Recalling how Robert once grew close to a group of ambitious young poets, he says,“in a matter of months he started sounding like them, except of course much better.” Bock’s low-key prose swiftly changes registers, from nostalgic to ironic, from reverential to wry, allowing the narrator to express a broad spectrum of emotion in contrast to Robert’s hardened stoicism. Pablo Strauss’ deft translation makes it easy to forget this is a translated work until one encounters something uniquely French-Canadian, like Robert contemplating setting fire to a rubber factory owned by British-Canadian conglomerate as a result of his youthful association with an FLQ-type group.

Any confusion in Baloney’s back-and-forth chronology is mitigated by the simplicity of its plot and characterization. Robert’s death is announced on the first page; he is stubborn, self-absorbed, a bit of dirt bag, and so the immense affection we come to feel for him reflects the immensity of Bock’s talent. Robert is sympathetic because he seems real, a quality refined by each entry in the small but rich trove of stories that constitute his transformation from idealist to never-has-been.

Robert leaves the lumber camp in the mid-1950s and resurfaces two years later at his mother’s funeral, then again in Sherbrooke in 1961. He can’t account for the time in between: “he once told me that was why he wrote, to prolong the time he existed, to have fewer of these moments of nothingness.” The stacks of poems crowding Robert’s apartment area testament to his existence throughout these dark periods, and a counterpart to the novella itself, where the narrator has distilled Robert’s most lucid – though not necessarily accurate – memories. In his youth, writing also helped brace him for new experiences:

Robert wanted love but couldn’t understand what it would do to him … He’d been reading love poetry long enough to know how love was represented, was all too familiar with telluric currents and enflamed physical sensations, trees and animals, sugary odours, uncontrollable enthusiasms. That at any rate was how he put it in his writings.

Poetry is as much a physical undertaking as a mental one for Robert. When he rereads his old poems for the first time, decades later, “his body remember[s]everything the poems left unsaid.”

Robert’s bodily connection to poetry isn’t entirely positive, however; throughout his life he is shamed, humiliated and even physically punished for it. At the lumber camp where the better-educated Denis introduces him to poetry, the two boys are forced to do an impromptu recital when the drunken lumberjacks discover their books. Watching his terrified friend read, Robert “felt sorry for him. He also felt violently naked. The book held over his pelvis like a fig leaf afforded no protection. After a mocking ovation, the men demanded more.” The inception of Robert’s engagement with poetry is essentially masochistic. When it’s his turn to read, Robert finds he can’t stop; his voice becomes strained and grotesque, and the men sit rapt.

Years later, while skinny-dipping in Peru, Robert and his friends are ambushed by four men in military coats who kill one of them and hold the rest at gunpoint. When the paramilitaries find volumes by Pablo Neruda and Octavio Paz in their bags, they yell and press the boys’ faces into the books “like you would shove a puppy’s nose in its urine to teach it a lesson.” The culmination of Robert’s association of poetry with bodily shame is also the incident that prompts his hospitalization: the narrator finds Robert trapped under a fallen stack of his own poems, having “shat himself and [wearing]an expression of terror.”

Initially convinced he has met “a true living treasure,” a tortured genius, the narrator learns upon reading the poet’s work that Robert has suffered more because of his art than for it. After a life of writing poems that are “just plain bad,” Robert has romanticized his alienation from his family, colleagues, and other poets who fail to appreciate how all the poetry in the universe is “born anew in the notebooks piling up in his apartment”. To the narrator, who’s at a crossroads between family life and writing life, Robert represents a possible outcome of over zealously pursuing the latter. Their friendship is ultimately as practical as it is sentimental. Bock’s primary achievement in Baloney is that he neither indulges nor entirely dismisses the idealism of producing art at all costs, suggesting instead that there’s no inherent glory in pursuing a passion that takes as much as it gives.