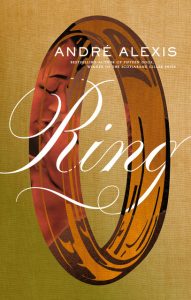 It has been nearly a decade since the first book in André Alexis’ ambitious Quincunx pentalogy appeared, and with each new installment his alternate version of Southern Ontario has become larger and weirder. So it is fitting that the final novel, Ring, serves as a kind of reunion: within the first dozen pages, we are reintroduced to the heroes of Pastoral, The Hidden Keys, and Days by Moonlight, who are now living out their interconnected fates in Toronto. They are brought together by a new character, Gwen (short for Gwenhwyfar), a young woman from Alexis’ beloved Lambton County. In keeping with the complex logic of the Quincunx (a Quincunx is an arrangement of five points into a square—imagine the five on a die. Though Ring is the final novel to be written, it is listed as the third, or central, point in the constellation, though chronologically it takes place after the events of The Hidden Keys and Days by Moonlight), it is Gwen’s story that is at the heart of the series.

The Quincunx is an experiment in genre, each book an adaptation of an established form: the pastoral, the fable, the treasure hunt, the Dantean journey through heaven and hell. As the name suggests, Ring is a recapitulation of one of the most enduring plots, the romance—it is the tale of how Gwen meets, falls in love, and settles down with Tancred Palmieri, the noble thief from The Hidden Keys. But readers aren’t given a straightforward story of how the boy met the girl, the girl fell in love with the boy, and, after a few misunderstandings, got married. Like each of the previous books, Ring contains a metaphysical twist. The universe of the Quincunx novels is one where the Greek gods take an interest in human affairs, and the ring of the title is not a wedding ring, but a magical heirloom signifying a millennia-old compact with a goddess.

The nature of this compact makes Ring hard to write about without spoilers. After Gwen falls in love with Tancred, she returns home to visit her mother and father in Bright’s Grove. Here she learns that the women of her family are recipients of a divine gift that has been handed down from mother to daughter since antiquity: a ring that grants its bearer the power to make three wishes with respect to the man she falls in love with, so long as she makes some form of sacrifice. Accompanying the ring are three books, one containing a poem that tells the story of how the ring came into being, one containing translations of the poem, and one containing commentary from generations of Gwen’s foremothers about how best to use the gift (they unanimously agree, for example, that making your husband’s penis longer is a bad idea). The drama of the story is not whether Tancred and Gwen will end up together, but how and whether Gwen will use the ring.

The ring isn’t simply a plot device: it is the plot. The scenes of Gwen and Tancred’s courtship are written in the understated realism that readers of Alexis’ previous books will be familiar with, but it is the parts of the book that explore the moral, social, and metaphysical questions around the use of the ring that really crackle. It isn’t simply that Alexis is a writer steeped in the tradition of the “novel of ideas”—though he is, more than almost any Canadian writing today—it’s that his greatest strength is his imagination. Alexis understands that the old traditions of the myth and fable can get much closer to our experiences of being human than the documentary approach, and in Ring he uses a fairy tale device to dramatize the problems of heterosexual monogamy.

For Gwen, the experience of falling in love is mirrored in the experience of learning about the ring. She didn’t ask for any of this to happen, and she’s not sure she’d choose it (a great gift often being indistinguishable from a curse). The Quincunx books, each in their own way, are about gifts—which is to say, they are about fate. Through no design of her own, Gwen has encountered the numinous, and her life is irrevocably changed. But every blessing requires a sacrifice, and the pleasure of Ring, as with the rest of the pentalogy, is in the way Alexis unspools the inexorable logic of the miraculous.