By Meghan Desjardins on February 2, 2021 Reviews 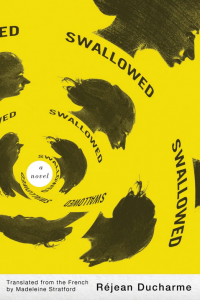 The publisher of Réjean Ducharme’s debut novel, L’avalée des avalés, isn’t exaggerating in claiming that this first Canadian English translation fills a longstanding cultural gap in Canlit. Although Ducharme’s work is little read in English Canada, he’s a towering icon of Quebecois cultural life, complete with a personal myth, a permanent place in the school curriculum, and an enduring presence in academic and popular culture.

Ducharme was only twenty-four in 1966, when L’avalée was published—not in Quebec, where he couldn’t interest publishers, but in Paris, by the prestigious Gallimard press. It quickly caused a sensation and became a bestseller. Ducharme immediately chose a life of seclusion, and refused interviews, publicity photos, and appearances. He wrote about a dozen major works, including the screenplay for Les bons débarras (Good Riddance) and hit songs for Robert Charlebois and Pauline Julien, and won many honours for his work, including the Governor General’s Award, twice. He was also a sculptor under the name Roche Plante. He died in 2017.

Though Ducharme enjoyed real success in the theatre as well as with his other books, no single work achieved the resonance of his first, here translated as Swallowed. It’s been a touchstone for generations of readers in Quebec and turns up referenced in many subsequent works, notably Jean-Claude Lauzon’s film Léolo and Heather O’Neill’s Lullaby for Little Criminals, in both of which the main characters treasure the novel, because its protagonist’s situation parallels their own.

Ducharme’s prose is playful, inventive, metaphorical. It’s full of allusion, evocation, alliteration and puns, as well as highly specific cultural references. Throughout Swallowed, the narrator, Berenice, frequently quotes Emile Nelligan’s poetry, for instance. Nelligan himself has the kind of cultural significance Ducharme attained, and the Quebec audience would be instantly familiar not only with the poetry in its own right, but with the myth of Nelligan—which is, again, somewhat paralleled by Berenice: the child of mixed heritage, a rebellious adolescence, and a troubled relationship with society and reality.

Berenice begins her narrative at the age of five and continues speaking until about fifteen, when the novel suddenly breaks off without an ending. All along, her stream of consciousness reveals her severely damaged psyche, and her precocity. Her voice is so nuanced and elevated it’s impossible to believe this is a five-year-old speaking; but that’s only the first indication that Ducharme has little patience for the ordinary. Berenice is the second child of mixed Catholic and Jewish parents, and she hates them both. She insults and avoids them, strikes them when they try to offer affection. But she does love her older brother, Christian. In fact, we can plainly see that her love is deliberately incestuous. Nevertheless, when Christian returns home from boarding school, her expression of love takes the form of violence. She invades his bedroom and pummels him until he’s forced to defend himself. For Berenice, love and violence are the same thing, and this is expressed throughout the novel.

Centering on the child of a highly dysfunctional marriage, and on a mother who was married at thirteen against her will, it’s a fairly believable portrayal of the damage one generation can inflict on the next. Berenice’s self image is that she’s unloved, abandoned, and ugly, even though her mother consistently tries to reach out with affection. Becoming more rebellious as she approaches adolescence, Berenice is sent to live with her orthodox cousins in New York, where she continues her campaign against expectations and restrictions. She becomes so outrageously unmanageable that she’s finally sent off to Israel and military service during the Arab-Israeli war. Her trajectory of resistance continues until the novel’s last page, which leaves us hanging adrift, without resolution.

But plot isn’t a priority in a book which evokes classical mythology, history, and philosophy; the clash of religious cultures; the effects of parental conflict on the children; and the specific post-World War Two Quebec cultural context. The flights of linguistic play always reach up and not down: there’s no joual, the common patios of Montreal’s streets, but rather a conscious appropriation of archaic and literary language. In this respect, Ducharme dazzles us with the unexpected, the alliterative, the evocative. And if Émile Nelligan is almost a bedrock on which images, references, and quotations are built, particularly the image and vocabulary of his most iconic poem, “Le vasseau d’or” (The Golden Ship), then the surrealistic eruptions into the narrative seem to owe at least as much to Lautréamont’s Maldoror, and Rimbaud’s Illuminations.

Reading Swallowed makes me rethink many subsequent Quebecois novels and writers, and I suspect this will be true for other anglophones. However, a different discussion could be had about the basis for Ducharme’s occasional use of racist tropes: African-American athletes are “simian-looking” and Jewish cousins have “hooked noses.” This is ignored in both the introduction and the translator’s notes.