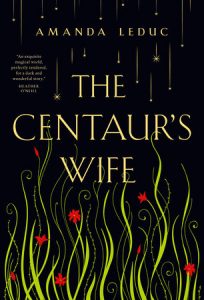 When I was young, and an aspiring writer who loved putting words together but often struggled to come up with ideas, my dad used to tell me that every story starts with a “what if?”

What if a horse fell in love with a woman? What if meteors hit the earth and human society had to start over? What if the child you birthed wasn’t the one you were expecting? What if a woman who has cerebral palsy, whose legs don’t work like other people’s, could climb a mountain? What if a bird flew as high as the sun? What if stories were never just stories?

These are not my questions (though I wish they were!), but rather some of the “what if”s that propel Amanda Leduc’s shimmering, surprising novel The Centaur’s Wife. In a town at the base of a magic mountain, a woman named Heather gives birth to twin girls. That night, meteors decimate the earth, leaving only a few survivors. A woman named Tasha, a doctor, arrives in town and takes charge, insisting that they will be okay if they work together. Meanwhile, the centaurs who live on the mountain have to choose: will they help the humans, or let them die out?

Starting from these expansive premises, Leduc builds a muscular and suspenseful story, further summary of which would not only become quickly confusing, but would inevitably be ridden with spoilers. The plot is complex, but Leduc does not write herself into any corners; rather, the narrative keeps on opening wider and wider, twisting and turning along a path that seems both logical and strange. Informed by magical realism and apocalyptic fiction, the novel is part fable, part fairy-tale, and slips among modes with such earnest ease that I was happy to suspend disbelief, willing to go wherever it took me.

As in any good fable, the magic in The Centaur’s Wife is replete with morals. In one sense, the novel is a cautionary tale about environmental destruction: it is a story about the earth’s revenge on humans. Leduc is unsubtle in her presentation of this theme: humans “[dug]their holes into the earth and [laid]their roads where trees used to be,” she writes. “They built ma-chines, smoked the air… They no longer listened to the voice of the earth, and animals around the world grew fewer, and died.” And now, in the aftermath of catastrophe, while humans are unable to grow anything in their gardens, wild vines “crawl up to choke the buildings” and vegetation “strangl[es]the roads”; “the ground is rejoicing. Green things will grow again, tendril their way over the human death.” The world is fighting back.

And yet humans are adaptable and resilient, and these qualities, Leduc implies, are close cousins of love and of hope. Sometimes you find yourself living in a story that was not what you expected, and you have to adjust: this wisdom emerges from the apocalyptic narrative, but also from Leduc’s graceful, sensitive exploration of disability. The novel opens with a fable (or origin story) about a woman who becomes pregnant by a man who is really a horse. The triplets she bears turn out to be centaurs, and as soon as she sees their unexpected, four-legged bodies, she “cover[s]her eyes in terror and disgust.” “Monsters,” she says, and asks the doctor to kill them. Instead, the doctor tells the father to take them up the mountain, and there they live in exile, inhabiting an “in-between place” for “in-between things.” Centaurs in this novel become metaphors for disabled folk: powerful and different, capable and misunderstood. Heather, the protagonist, has cerebral palsy (as does Leduc herself), and although her gait is not like everyone else’s—“tap-TAP, tap-TAP,” is the sound it makes—she also spends her days walking, walking miles and miles with two babies strapped to her body, moving forward. In her best moments, she knows that when a child is born with a disability, “[i]t takes time to realize that [they are]going to have a different life.” There is a light at the end of the tunnel, she says, “[b]ut it’s not going to look like what you expect light to be. You have to get used to that.”

The Centaur’s Wife is bursting with unexpected stories and with the unruliness of life. It is about magic and nature, bodies and hearts. It is about impossible love, and it is about grief—for loved ones, and for ways of life, for what we thought we knew. (This will feel profoundly familiar to readers in the real world, today.) And through it all there is hope. “Everything will be okay,” repeats Tasha, the doctor: “We’ll get through this together.” Hope is a story we tell ourselves in order to live. What if we could all be there for each other?