By Emily Donaldson on September 30, 2022 Reviews 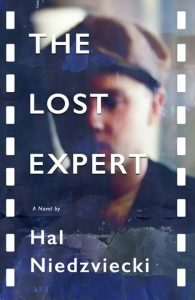 A few years ago, in a review of Maureen Medved’s Black Star, I observed how a lot of women in Canadian novels were going insane in eerily similar ways. In particular, they were discovering doppelgangers that led them down rabbit holes of fantasy. One of these books was Michael Redhill’s Bellevue Square, which tells the story of a woman who meets up with her double in Toronto’s Kensington Market.

Well, gooses and ganders and all that has Chris Hutchins, a good-looking and likeable barista walking through Trinity Bellwoods Park (just a handful of blocks from Bellevue Square) and being mistaken for one of Hollywood’s biggest stars, Thomson Holmes. There’s a movie shooting in the area and Holmes has gone missing from the set, so when Chris shows up he’s literally grabbed off the street and pressed into action.

Remarkably, or perhaps not so remarkably given the fantastic premise, nobody realizes the difference and Chris fits right in. Indeed he proves even better than the real thing. The production doesn’t miss a beat, with “Thomson Holmes” delivering the performance of his career as the Lost Expert—so named because he has a gift for finding missing people—a man living in an alternate-history America that’s leaning toward fascism in the Depression. Meanwhile, in the not-so-real world, Chris is less adept at finding people than he is at losing himself.

All the world truly is a stage, and, in the opinion of one of Chris’s friends, celebrity itself is an act and a shell game: “famous people were pretenders, human chameleons whose instinct to change colours was what allowed them to effortlessly stay on top of the electronic undercurrents.” As the lizard metaphor suggests, one has to be a natural at this game. Luckily for Chris he has no problem being a dude, playing a dude disguised as another dude, to the point where he doesn’t even need to work off a script (which is fortunate, since there doesn’t seem to be one). Strictly speaking he doesn’t even consider himself to be acting, but rather inhabiting the part he’s playing and improvising from his director’s vague prompts.

The doubling motif is doubled down on by having the novel switch back and forth between scenes from the movie The Lost Expert, presented in screenplay format, and events in what I’ve already registered reluctance to call the real world. In effect there are two narratives. One is the script, which seems like a riff on Philip Roth’s The Plot Against America, weaving the story of the Lost Expert in with the rise of a right-wing, anti-Semitic politician who also sounds some contemporary notes about building a wall and making America great again. The other is more like a David Lynch movie, beginning with the vanished movie star and then introducing mysterious, sinister figures who seem to know a lot more about what is going on than Chris does.

There are suggestive links made between the two stories, but deeper connections are harder to come by. Obviously enough, it’s a novel about absences, but too often these are left being merely suggestive. Thomson Holmes is a ghost, and for all the time we spend with him Chris Hutchins is nearly as big a blank. Most of the time he’s wandering about in a dissociated state:

When he was acting, he disappeared. There was just the Lost Expert. But when it was over, it was almost like what he figured jet lag might be like—a groggy, confused dis-awareness separated from the temporal by a thick haze sticking to everything.

Both Chris and the Lost Expert lack motivation (or the current buzzword, “agency”) and spend most of their time being used by other people. Chris’ improvisations are unconscious, as though he’s on automatic pilot in front of the camera; the Lost Expert is a nose for hire with little understanding of his gift.

There may be a point in this about what Niedzviecki identified in a recent interview as one of his preoccupations: “People caught up in it, unaware, driven by hidden forces of foreboding and need.” For a novel this length, however, drift in the grip of forces that remain hidden is a hard sell. Meanwhile, the most vital character is the film’s director, Bryant Reed, and the story feels in need of more of his direction. He is, for one thing, the only Jewish character, an angle that seems important to what’s going on. Is Chris a Zelig figure? Is he becoming Jewish in some way? These are things we’re left to wonder about.

The Lost Expert is a strange and various thing, with much to enjoy for fans of the New Weird in Canadian writing. Niedzviecki is a genuinely thoughtful and original writer. The good parts here, however, don’t always connect and the absence at its centre feels like it might be a case of there being one missing person too many.