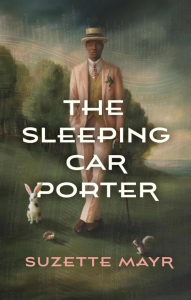 Suzette Mayr’s new novel captures long-distance train travel in all its picturesque, cramped, and crumb-strewn glory. R T Baxter is a Black sleeping car porter on the fastest train across the continent. Twenty-nine years old in the summer of 1929, he’s been saving up for dental school for eight long years, with two more to go until he’s accumulated the necessary funds to cover his tuition. We meet him on the platform at the beginning of a westward run, tired but ready with his step-box to guide passengers on board and into their berths.

Baxter’s first impressions of his charges are shortened, quicksilver, into nicknames that carry through until journey’s end: Mango, Flannel, Pulp and Paper, the Spider, Punch and Judy, Blancmange. Among others, Baxter’s car contains a newlywed couple, a fractious mother and daughter, a spiritualist, a relentless busybody, a recluse, and two bickering employees from a pulp and paper company.

The book is a near-constant series of physical sensations, fluids, aches, and grubbiness, all heightened by the physics of it taking place on a moving train, inside “the tube of shelf after shelf of passengers.” On numerous occasions Baxter mistakes his polishing cloth for his handkerchief, accidentally wiping his brow or, worse, his mouth with the grime from the shoes he’s polished. I shuddered a little each time.

From moment to moment Baxter’s salvation from the train is his richly populated imagination—even when it impinges on his sense of reality. In addition to all the living people he must attend to, he is visited by the memory of his Aunt Arimenta, who scrimped her whole life to give him the money to leave the island of his birth and come to Canada, as well as by vivid recollections of his own past sexual encounters—his first time, in a wooded park in Winnipeg, and his brief affair with the porter who trained him and whose current whereabouts he hasn’t been able to ascertain. These memories continually brim to the surface as Baxter navigates the close quarters of the sleeping car. Then there is the team of Egyptologists in The Scarab from Jupiter, the science fiction novel he reads in his limited spare time. These musings I found a bit less convincing. It’s heartening, certainly, to imagine Baxter as not being too jaded to be carried away by the Egyptologists’ adventures, but there’s a goofiness to it that I couldn’t quite buy. This is a minor complaint, however.

The porters serve at the whim of passengers whose moods and expectations and ideas of their own goodness can turn on a dime. “I both love and pray every day for my brothers and sisters of the Negro race,” one assures Baxter, shortly after accusing him of lying about adjusting the temperature in her compartment and before ratting him out to his supervisor for something else. Mayr adds nuance to the basic split of haves and have-nots with the addition of want-mores and want-you-to-think-they-have-mores. These are presented simply but powerfully: passengers who feel certain they’ve booked one of the gracious drawing rooms on board rather than the merely “pauperish well-to-do” sections they’re being shown to, whose smart shoes turn out, upon closer inspection, to be worn nearly through.

On day four, between Calgary and Banff, the train slows, then comes to a stop, the tracks blocked by a mudslide. When the delay lengthens from hours to days, a decision is made: “they will release the passengers into the wild.” As Baxter’s shift ticks on, no end in sight, he becomes responsible not only for his car but for an open-ended piece of woods beyond the tracks. His life is already a series of running tallies: money left to save for dental school, hours left on shift, towels unaccounted for (the cost of which will be taken out of his wages even though it is the passengers doing the purloining), potential demerits. The longer the train is stuck on the siding, the longer his shift, the shorter his passengers’ patience and the greater the likelihood of invented complaints and baseless tattling that will threaten his job.

I thought I had had enough of the euphoric ending in literary fiction. It can feel like a cheat, a quick blast of heightened emotion to bring about a conclusion that might otherwise not quite make it across the finish line. But when a man who has been trapped inside a tube of other people’s wants and messes and ghosts is at last sprung from service for a few hours, he (and his readers) deserve nothing less than euphoria. As such, the relief, when Baxter’s train finally pulls into Vancouver, is palpable and sweet.