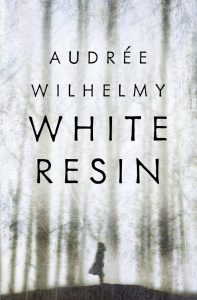 Audrée Wilhelmy’s audacious novel White Resin is a dark fairy tale, saturated in myth and images of the natural world. From Wilhelmy’s prodigious imagination come two people, a girl of the taiga named Daā after her first utterance and a boy named Laure with albinism “so pale he seems to glow, a lantern child.” In a pagan inversion of Christianity, Daā is conceived by twenty-four nuns living in an unconventional convent in the mythical northern region of Bron the Desolate, dominated by the presence of the huge coal mine run by the Kohle Co. Daā’s is a virgin birth—“I emerge from the womb of a convent, twenty-four women, no men, no father”—though her implied father is the land itself and the local Olbak people. Daā, in other words, is no conventional child, but rather semi-divine, attuned to the elements and the other-than-human. “They [the nuns]teach me the language of trees, bees, passerines, recite the inventory of this living space, call it Ina Maka [Mother Earth in Lakota]…”

White Resin is a novel of parallels and opposites, from the title itself (the white of Laure’s body, the black tree resin that Daā loves to smear herself with) to the white robes of the nuns and the black dust of the coal mine, and ultimately its irresolvable conflict between nature and industrialization. It’s also a novel of female power and fecundity, a novel in which it is the land and Daā who survive, and who take into themselves the endless corpses from the all-devouring mine.

Rather predictably, the semi-divine Daā and the human boy become lovers, then parents of three children, the youngest of whom inherits her mother’s abilities. Tragic though the story is—as all such myths are—it can be challenging to fully engage with characters who are archetypes in a magical reality. The lingering power of the story lies with the vivid imagery Wilhelmy conjures. She not only fills her novel with details of the plants and animals of the north, but also ransacks northern languages to create a hybrid mix of Russian, Irish, Atikamekw, Inuktitut, and Wendat names and phrases, along with a brew of Basque, Greek, and Gaelic mythologies. The result is linguistically dazzling, and Susan Ouriou’s translation is a marvel of precision and musicality. That said, there are times when the story insists too much on Daā’s taiga-ness, when the author is perhaps a little too in love with her marvellous language. The story begins to sag halfway through, and though the final events reward the carefully built conflict of the first half, they come a little too late.

It’s intriguing to see how young Quebec writers are incorporating the mythic and the other-than-human in their recent fiction. Wilhelmy’s novel has many similarities to Fauna, a collection of linked stories by Christiane Vadnais, also awash in the imagery of forest and water, of humans shapeshifting into animals. It’s a welcome and long overdue decentering of the human, a reassessment of human power vis-à-vis nature—a lesson, in the midst of our summer of wildfire and floods, that we are being forced to relearn. The work of Wilhelmy and Vadnais makes much contemporary fiction in the anglosphere look irrelevant, still all-too-often focused on the purely human world. These Quebec writers shock us into a new recognition that humans can only survive through surrender to an older and more powerful realm, a realm to which even Daā must submit when her human loves are taken away from her.

This is fiction that embodies the words of Simon Lewis, professor of global change science at University College London: “The really, really scary thing about the climate crisis is that every single achievement of every human society on Earth occurred under a climate that no longer exists.” It’s a novel for the body, not just the mind, a novel that overwhelms the senses and reminds us—just as Daā does—that ultimately we are mammals too, and we forget that fact at our, and the world’s, peril.