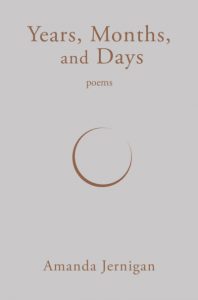 In Years, Months, and Days, Amanda Jernigan bridges the gap between the religious and the secular, transporting Mennonite hymns from a secluded community in her native Waterloo into formally exquisite poetry. This is less a studied translation of a specific tradition into accessible language than an appeal to the universal realm of poetry; if you understand poetry you can understand these hymns. Her poems draw on the personal, lyric tradition, but they are more like a choir of multiple voices (religious and secular) singing a collective song. Even as Jernigan draws from the hymns’ idiosyncratic history, her ultimate goal is to collapse that history into the eternal.

Despite the title of her collection, Jernigan is not precisely concerned with the historical moment. Years, Months, and Days comes from the Old Order Mennonite convention of listing the lifespan of the deceased in minute increments on their grave marker (e.g.,“Matt Borland, 32 years, 5 months, and 12 days…”). By freezing these intervals in perpetuity, Jernigan’s poetry often creates the feeling of a purgatory on continual loop. In an early poem, she laments, “Before you were / I did not grieve you; / now you are not  / I cannot leave you.” Being and nothingness, memory and forgetting, grief and closure each collapse in on themselves, evoking the confused sensation of both absence and presence after the death of a loved one.

Elsewhere, the temporal loops are expressed formally. Jernigan experiments with poetry that is meant to be read continuously, so that the end leads back to the beginning: “you see I’ve come / so very far / from nothingness / that now I can / not see it for.” These formal experiments are both satisfying and frustrating, promising endings that never come before the loop begins anew, turning the reading experience into a temporal eddy.

Despite existing inside a twilight zone, the poems are also fertile, full of references to weather, seasons, and reaping and sowing: “we are one / branch and fruit / fruit and vine / vine and root.” As Jernigan writes in her afterword about her experience growing up near the Mennonite sect, “I in some sense shared very little with the Old Order children who were my neighbours … Yet in other ways we had much in common: the landscape, the weather, the turn of the seasons.” Instead of instilling a sense of the passing of time, these agricultural images are also eternal loops of birth and death, reminders of the common ground and sky shared by the living and the dead in both the religious and secular realms.

At times, Jernigan’s poetic eternity can make death sound somewhat trite. In stunting the passing of time, the depth of human experience lived between these days, months, and years seems stunted. While some of her observations are acute—“come to think / how well a coffin / comes at last / to fit a person”—many slip away underdeveloped, having little texture with which to gain purchase: “Death we inherit, / one from another / so we pass on, / one to another.” There is little here of a real, lived sense of grief or death. In the end, death remains a sacred icon—like her poetry, it is exquisite but distant.