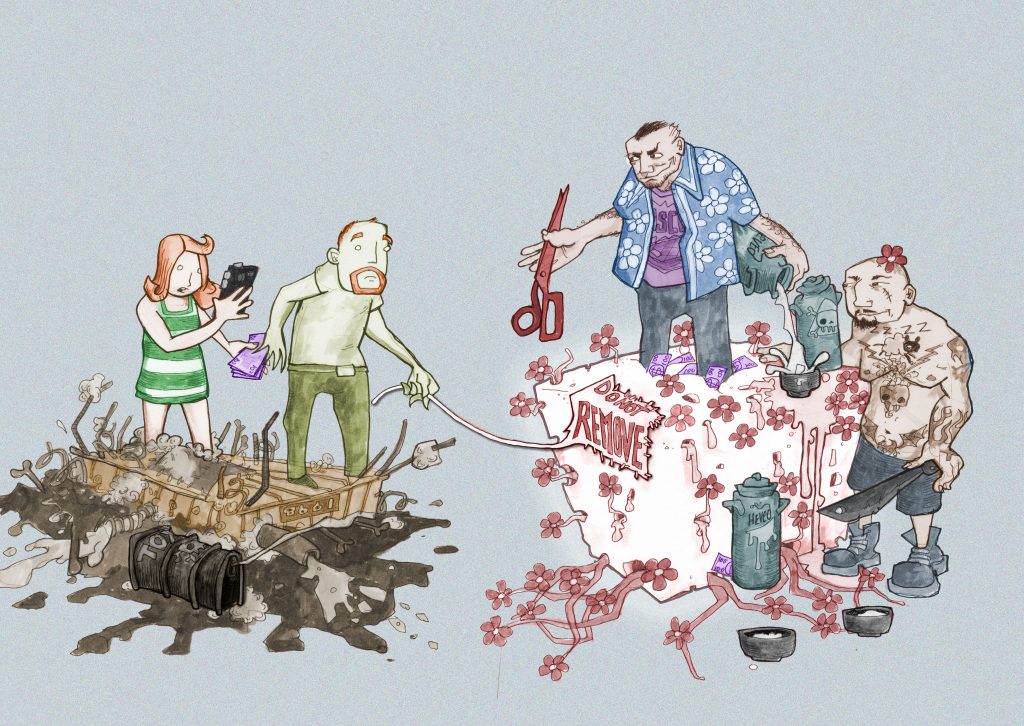 Determined not to walk away empty-handed, we crossed our fingers as we entered the store. The salesman rose from behind the desk counter. The place was empty, but the décor was sharp, minimalist, contemporary. A week’s worth of research and deliberation had brought us here. According to the internet, NatureVive [this, and other names have been changed throughout this piece] was the Montreal spot to get a sustainable, non-toxic, eco-friendly mattress. “Regular mattresses, especially the latex ones, are non-recyclable, carcinogenic deathbeds,” Meg had explained to me. “If we get one, it’ll linger in a landfill for generations.”

The salesman swept in from the other side of the store, hands behind his back. He wore pointed leather shoes that slightly curled at the tips. His silver belt buckle looked like it was going to burst from the pressure of his hefty gut. “Looking for something in particular?” He had the build of Bobby Bacala from The Sopranos, but with the slick black hair and grey sideburns of Paulie Walnuts.

“A natural memory-foam mattress,” I said. “Something affordable.”

He nodded, confidently leading us to one particular item. “Try this one out. Trust me, you won’t wanna get up!”

Meg and I lay on the bed. Facing each other, we nestled into the foam like chipmunks hibernating in a warm burrow.

“Take your time.” The salesman smiled, standing at the edge of the bed. “Unlike other companies, NatureVive makes all its products with pure essential oils and organic ingredients and handcrafts them right here in the warehouse. One hundred percent natural memory foam made with hevea milk sourced from Papua New Guinea. Absolutely no polyurethane, so it won’t give you breathing problems or asthma.” His head bobbled, hands clasped on his belly. “You’ve got to think about your health.”

Staring into each other’s eyes, Meg and I reached a tacit understanding. This is the one.

The salesman swiped left on his cell-phone screen. “This one? Four thousand.”

He nodded the nod of a salesman who knew this was coming.

Meg and I looked at each other. We were dismayed, defeated, and condemned by our account balances to a lifetime of toxic, environmentally unsound sleep on our two-decade-old mattress—the one I had been sleeping on since high school and that habitually caused me to wake up in the middle of the night with a sore back.

“Look,” he said, glancing at the floor. His stubbly cheeks flushed. “There’s a deal the manager does for some clients. Not everybody is comfortable with this, so I completely understand if you don’t wanna do it. No pressure, but if you pay in cash, it’s half price. No taxes.”

“Half,” he repeated like he’d just asked a stranger out on a date. “Take your time. Think about it. No pressure at all.”

I turned to Meg and whispered. “Who pays for a mattress in cash?”

“I dunno, but it’s a huge discount. What do you think?”

“Um,” Meg began. “We don’t have two thousand dollars cash on us.”

The salesman shrugged his shoulders. “E-transfer.”

Meg glanced at me and turned back to him. “Okay. Let’s do it.”

“Of course,” he said as we proceeded to the sales counter. He got behind the desk and sat at the computer. “I’m printing your receipt. It’ll be like you’ve made a return on a defective product.” He signed the receipt and stapled his business card to it. “Just be sure to send the e-transfer to the email written there. This weekend, please.”

It was his personal email. Were we defrauding the company? I wanted to ask, but stopped myself. The crime shows I’d watched had taught me that the less I knew the better. Ignorance allowed for complicity. I hadn’t done anything comparable since shoplifting Skittles from a dépanneur when I was fifteen. I examined his card. “Raffi Kasparian.”

“That’s me,” he bowed his head, printing the false receipt. “Delivery takes two weeks. You should get it on December 24th. Merry Christmas!”

We sat in the car with the heat on. Our headlights shined on the building. Raffi was still at the desk, clicking away on the computer.

“Did we just do something wrong? Something stupid?”

I scratched my cheek and looked out the window to the street corner, where there were three different mattress and furniture stores. I wondered if any of them were money-laundering fronts for the Armenian mafia. Was there an Armenian mafia?

“Maybe,” she hesitated. “But two thousand dollars. That’s hard to turn down.”

“Hell of a bargain,” I muttered. “It’s practically a steal.”

We drove off and were about to merge onto the expressway when my phone rang from the dashboard mount. I glanced at the screen. It was Raffi.

“Good, good, just letting you know that I’ve sent you an e-receipt. Please, don’t forget to send the e-transfer tonight. I have to give the money to the manager tomorrow, okay?”

“Sure.” I hung up and pulled over on the side of the road by a gas station.

Meg’s brow furrowed. “We were just there…”

“And he said to pay this weekend.”

I nodded. “Maybe we should say we’re not cool with it. I mean, we haven’t sent the money yet.”

“Someone reasonable, like Dee. Surely being social worker gives her some kind of ethical perspective?” She dialled Dee and explained the situation.

“Two grand off?” Dee’s voice echoed through the speakerphone. “I’d do it in a heartbeat!”

“Yeah, no question! I mean, it’s definitely shady, but it’s just a corporation. Plus, you have the receipt, so you’re all set.”

“I’m not trying to be a goody two-shoes, but what if we get caught? Then again, maybe we’re suckers if we don’t go through with it.”

“Hold on.” I dialled my friend Vito, an auditor at Revenue Canada.

“What a scam!” he cried. “What’s the name of the company? I’m gonna audit the shit out of these bastards!”

“Do you think he’s not going to send us the mattress?”

“You’re fine, but these fuckers are going down! What’s the name of the company?”

A second later my phone vibrated. Text message from Vito: “WHAT’S THE NAME OF THE COMPANY?”

“All right!” Meg declared. “They both said we’re fine, so we’re fine. What’s the worst that could happen?”

I ran my hands through my hair and sighed. “Do you really want me to answer the question?”

“Here goes nothing,” she said, holding her breath. She pulled out her phone and completed the transfer while I stared at the steering wheel. “It’s done,” she muttered. “Now we wait.”

That night, I squirmed like a fish between the sheets of our bed. A dull ache resonated in the small of my back. In his Meditations, the stoic Roman emperor Marcus Aurelius wrote that one should only concern oneself with what is in one’s control. However, in terms of what one could control, virtuous action—doing the right thing—was all that mattered. A good life was lived with a clear conscience. I stared at the ceiling, projecting the slides I remembered from my Introduction to International Relations class, something about Kant’s categorical imperative, his kingdom of universal moral law in which its citizens were treated as their own ends, regardless of the consequences.

Would Marcus Aurelius have sent cash to his mattress salesman’s personal account? Someone was getting screwed, perhaps a minimum-wage labourer. If everyone engaged in shady deals, the company would go under and the labourer would lose his job, get into debt, be unable to provide for his kids. I fantasized about bailing on the deal and sleeping righteously on the hardwood floor. Monks walked on burning coals to test their resolve; couldn’t I handle our old spring mattress?

Carcinogens, toxins, bad posture. Was our health less important than doing the right thing? Perhaps the ends justify the means when it comes to the environment—climate change an existential threat to us all. An unethical action for an ethical purpose. More likely, the reasoning was self-serving. After all, it wasn’t betraying the ideal of living a good life that concerned me most. Behind the veil of wannabe righteousness, I was afraid of getting caught, of getting swindled. It was stealing. Wide awake, I turned to Meg.

“Tuesday,” she moaned and started to snore.

I slipped out of the covers, went to the living room, and typed NatureVive into my computer’s browser. A YouTube video from the previous decade filled my screen. NatureVive’s founder had gone on one of those venture-capitalist reality TV shows to get his company off the ground. I scrolled down the video list, squinting with suspicion as NatureVive products were touted on daytime TV. Raj Silva, the wellness guru and alternative-medicine advocate, promoted the brand in a promo video. The mattresses, said Raj, lightened trauma accumulated from previous lifetimes, especially when used in combination with his signature Soul Vision meditation specs.

I stumbled on a trove of Reddit conspiracies. “Something’s not right,” one Redditor wrote. “The average person buys a mattress once a decade. There’s never anyone in these stores, and yet, they’re everywhere! It defies the laws of economics.” I scratched my cheek and looked out the window to the street corner, where there were three different mattress and furniture stores. I wondered if any of them were money-laundering fronts for the Armenian mafia. Was there an Armenian mafia?

“Mattress Firm is a mob outfit,” another Redditor commented. Before declaring bankruptcy, had 700,000 stores across the United States, almost as many as Starbucks, so many stores in fact that many stood across the street from each other on prime real estate, the Redditor claimed. Steinhoff—later investigated for fraud—bought Mattress Firm for 3.8 billion dollars, more than double its market price, taking on the company’s debt. In 2016, a female employee was found dead in the back office of Mattress Firm. She had been shot in the head. “Killed because she knew too much.”

Daylight shone through the window blinds. My alarm was going to ring any minute. I had to get ready for work, but I continued to dig. Closer to home, I found a report about a fire that engulfed a mattress factory in Rivière-des-Prairies. A hundred firefighters were called to extinguish the flames. Was the building set ablaze by the eco-friendly mattress mafia, or a toxic-mattress crew?

“Are you expecting someone?” asked Meg, looking up from her bowl of Raisin Bran.

I hit the buzzer, peered down the stairwell, and saw a uniformed delivery man standing in the doorway.

“Mind giving me a hand with your delivery? It’s in my van, really heavy.”

I hurried outside to the curb where the delivery van was parked. It had arrived. The delivery man dragged the sarcophagus-sized box out the trunk. NatureVive read the box’s label. We hauled the box up the three flights of stairs to my front door. Panting, I signed for the delivery and pushed it into the bedroom. Meg and I carried the old mattress into the living room and turned our attention to the box. We hacked the cardboard apart, heaved the deflated NatureVive mattress onto the bed frame, and watched the mattress expand to its full size.

We lay on it, letting ourselves sink into its microfoam embrace. Meg yawned; my eyelids grew heavy.

“This is so good,” she moaned.

“I guess it really does pay.”

“What does?” she asked, words weighed down by lethargy.

“Let’s go back to sleep,” she mumbled, one drowsy syllable at a time. “Sleep.”

Joe Bongiorno is a prose writer and journalist from Montreal. His writing has appeared in places including Geist, The Antigonish Review, and CBC. He won Event Magazine’s 2019 Speculative Writing Contest.