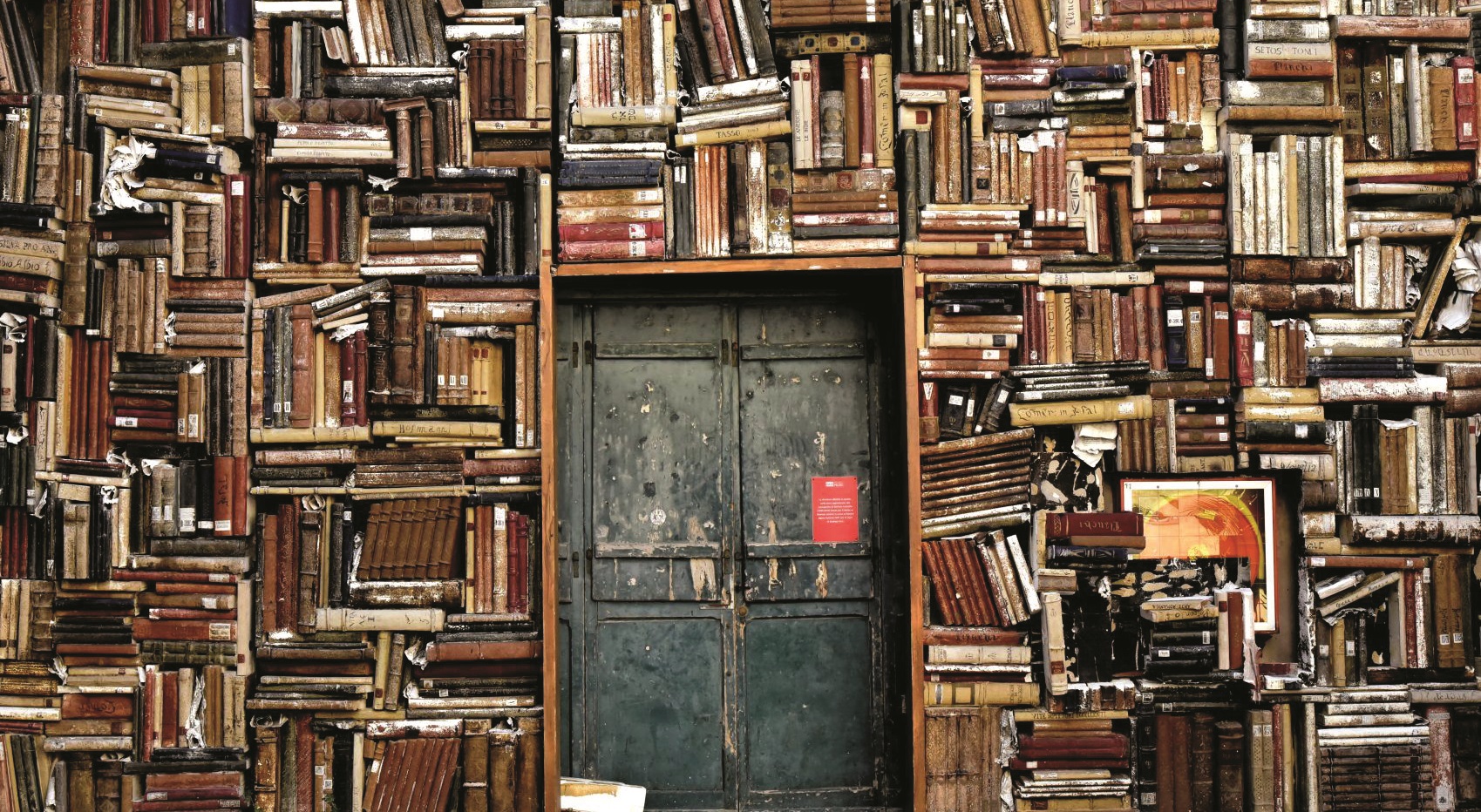 In 2011, Mark Medley wrote a piece for the National Post, where he was books editor at the time, called “Confessions of a Book Hoarder,” about his inability to dispense with any of the 1,250 or so books he estimated he owned. After making clear that he considered this to be a “paltry” amount, he added that he felt he should own at least twice as many. He’s right. And given that he wrote that column almost a decade ago, and life for book people being what it is, it’s probable that he now does own twice that number. I expect he now realizes that that number is also not enough.

Unfortunately, Medley seemed to be suffering some variant of Presbyterian angst, one of the many mental disabilities we Protestants have been saddled with, for he likened himself to one of those pitiable weirdos we see on television reality programs who end up hoarding so much junk that they can barely enter their homes. Medley’s article included quotes contributed by some of his colleagues, all confirming a shared belief that they suffer from some form of mental aberration caused by owning a lot of books. But all of these people commit a serious error when they refer to the amassing of books as “hoarding.”

Hoarding is indeed a pathology, and it is true that buying and keeping books bears some similarity, at least superficially, to that aberrant behaviour. And it is also true that both activities are addictive, and both often cause similar problems in personal lives and within families, conforming with the pathology of all addictive behaviour. But to liken the hoarding of books to that of other objects is absurd, akin to saying that snacking on fruit and vegetables is comparable with stuffing oneself with sugar and fat. It’s just silly.

Books are a necessity and all book lovers know this. The mind needs its food in the same manner the body does. This explains why the mindless pap offered on television and in movies is the mental equivalent of junk food. It is as dangerous to the soul as junk food is to the body.

One of Medley’s colleagues mentioned that her biggest anxiety before going on a trip is whether she’ll have enough books, whereas normal people worry about whether they have enough fresh underwear and socks. This is merely cautionary, not evidence of any sort of mental aberration. I once entered the hospital for an overnight stay—an eye operation—with my toothbrush and eight books. That I couldn’t read past the first page when I came out of the anaesthetic is irrelevant. I might have been able to, and what would I have done if I hadn’t had any books? I would have been forced to watch television, or just lie around wallowing in self-pity. The book lover is always prepared. No book lover would ever consider leaving their home without something to read, just as normal people don’t venture out without their wallet and keys.

A sub-caption on Medley’s article read, “Are you ever going to read those books?” which only emphasizes another absurd aspect of the common view that collectors, and even readers, don’t read their books. The proper response to such a superfluous question is contempt. No reader ever buys a book that they don’t intend to read. Should they not get around to reading it will always be due to other factors; the two most common being that they weren’t yet in the proper mood for the book, or that they died before they had time to get to it.

To reproach someone for not reading a book when they are already hundreds behind—never mind the ones they’ll be buying this week—is simply vulgar and insensitive. Nor does this even touch on a phenomenon that seems tied to old age: rereading books. I do that a lot these days and have made some startling discoveries while revisiting old friends and emotions. Let me say that if you read a book you read and loved twenty or forty years ago you will find a very different book than the one your memory recorded. Since the text didn’t change, something else must have. You’ll be in for some serious surprises if you reread books from your youth.

To my mind, the naysayers’ behaviour is usually evidence of secret feelings of inferiority on the part of people who are painfully aware of their own lack of culture. Also, such people do not realize that meaning to read a book is, eventually, almost the same as reading it. Even more so now that we’ve established that you’ll need to reread many of the good ones anyway.

Simply reading or rereading a book is often not sufficient. Many books demand to be dipped into again from time to time. And since the impulse to do so often arises in the middle of night, when no library or bookstore is available, it becomes obvious that one’s only recourse is to keep all the books one possesses. There is nothing strange or twisted about this, it is merely more evidence of the depth of wisdom all readers attain with time.

It is from these common misunderstandings about the nature of books that the distasteful accusation of “hoarding” arises.

What is strange is the notion that one could, or should, dispose of a book.

It could be precisely that book, the one you thought you no longer needed, that you feel the need to consult at 3 a.m. And if you have foolishly gotten rid of it you will suffer agonies of frustration and remorse.

As for weeding, better not to even discuss such a futile dream; it just doesn’t work. I haven’t even considered that pointless activity since I was young and naïve. It is usually attempted on a Sunday. One begins pulling books off the shelves very early, sorting through them to see what can safely be disposed of. It always ends the same way. Dusk warns us that it’s time to straighten things up before dinner, you have multiple piles of sorted books everywhere, have read parts of six or ten, have discovered quite a few you’d forgotten you owned, and have finally found one or two that you feel you might be able to dispose of. There being no proper way to get rid of two books (no book lover has ever thrown a book in the garbage), the only thing to do is put everything back on the shelves, until you have more time. These futile attempts and their predictably sad result are well known to all book people. The only moral to this story is that the guilt one feels at yet another weeding failure is a common side effect of the disease and should be seen as such and ignored.

Some while ago, Ian Brown, of the Globe and Mail, came into my store. He was writing a piece on book weeding. (I had a strong suspicion he had recently suffered the humiliation of a failed weeding attempt.) We were chatting when the renowned Canadian rare-book dealer Debra Dearlove walked in. I introduced her and said, “Ian is doing a piece on weeding personal libraries. He’s here for some advice.” Debra, taken aback, roared with laughter, and said to Ian, “You’re asking him for advice on how to weed!?!” She left, chortling, her anecdote for the next few days secured.

I have perhaps 200,000 or so books in my large store, my home, and in a large storage warehouse. Certain of my enemies over the years have claimed that I am not really a bookseller, but rather a collector who uses his bookshop as an excuse to buy books. Even if there were some truth in such an accusation, how could any civilized person conceive of this as an insult?

Carter Burden, an heir to the Vanderbilt fortune who attempted to collect every piece of American poetry ever published (he finally gave up in despair), once uttered one of the great book lines (a modification of a phrase attributed to Wallis Simpson): “You can never be too thin, too rich, or have too many books.” Whenever Burden’s name was mentioned, a colleague of mine would always reverently say, “If it wasn’t for him I wouldn’t have my building.” Unfortunately, that great collector died too young and most of the book trade’s hopes for the future were dashed yet again.

The real point is that no excuses are necessary. And all ignorant accusations should be ignored by book readers, treated with the contempt they deserve.

Because, their contents aside, books are beautiful, as close to a perfect object as man has ever invented, the only possible other contender for our most important invention being the wheel. Any house that is stuffed with books resonates with civilization. Not to mention warmth and the comfort provided by the presence of old friends. As Cicero put it two thousand years ago, after a move of his own, “I put out my books and my house had soul.”

So, “hoarder,” you are not sick, you are civilized. Ignore the trolls.