I moved to Hamilton two years ago because I could no longer afford to live in Toronto. I can barely afford Hamilton. I eat at places on a Friday that I make fun of on a Sunday. In each of those places, we talk about food and what it means to be either from Hamilton or new to Hamilton—or to be explicit, what it means to live in a city in this time and this place.

Over beers, over dinner, in people’s homes, in parks, cafes, and restaurants or sitting in the courtyard before church, I’ve been told one story over and over again in the almost two years I’ve been here. The story is that Hamilton used to be pure; then people from Toronto came. They bought all the houses. They made things expensive. The name “Toronto’s Brooklyn” was claimed ironically, and then seriously.

If the food we eat in public tells us who we are, then the matrix of class, race, ethnicity, and self—the novelty and long traditions, the poverty and the wealth makes the Toronto-interloper narrative too simple.

I am complicit in the over-simplification of these narratives. To be front about my own complacency:  I’ve had complicated conversations about desire and the future at an Ancaster Buffalo Wild Wings while the Ti-Cats play on the big screen. I spend a lot of my time, and have a lot of meetings at hipster coffee joints.

In that spirit of thinking too much, and refusing to be complacent, here’s a set of ten anecdotes about what it means to eat in Toronto’s Brooklyn: 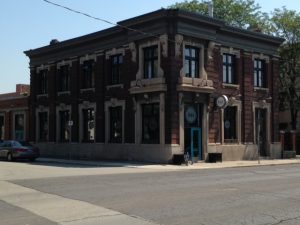 Barton Street East begins at James, and ends at Ottawa Street. It actually goes further than Ottawa, but for the purpose of this story, this is the section that counts. James is gentrified, and Ottawa is gentrified. Barton has not been. According to some reports, up to 75 per cent of Barton’s businesses are shuttered. What isn’t shuttered includes Eastern European orthodox cathedrals and Southern European parish churches. Portuguese, Polish, and Italian delis. A prison. A hospital. AIDS services offices. Barton has old-style taverns that haven’t been cleaned up yet. It also has a clean, open, elegant space called 541, which is run as a non-profit by Compass Point Bible Church in Burlington. People who can’t afford a meal can buy one there using buttons as trade currency. Two blocks in one direction, an old school is being gutted for condos. Two blocks in the other is a new restaurant called Motel from the proprietors of Toronto’s School, which was part of the crucial revival of Liberty Village, a neighbourhood built by developers and devoid of history. You can buy pancakes there for $18, which is about the cost of two-dozen perogies from the Ukrainian church kitchen, or three grilled-cheese sandwiches at 541, or two Portuguese sandwiches from the local deli. One of the condos costs between $125,000 and $250,000. A friend reminds me the school was shut down by the City, that businesses can co-exist, that Hamilton is not Toronto.

2. The Cheap and Reasonably Cheerful

On June 1, I moved back to the east end, about a ten-minute walk from Barton. If I walk the other way, I can go to King and Main. Five minutes from the intersection, there’s a small roadhouse bar called Buddy’s. The service is kind of lousy, but the food is good and cheap. Last week, a waitress and I kibbitzed about the space. She said she loves this restaurant, and she couldn’t afford the new spaces on Ottawa Street. I pay twelve bucks for a beer and a burger (with tip).

3. The Diner and its Simulacrum 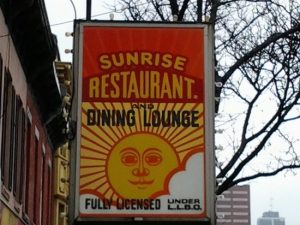 A five-minute walk away, Breezy Corners, a suburban restaurant chain (local not national), buys an old diner. The waitresses have changed, the prices have increased, the menu has been simplified. It’s less dead than other diners. There used to be two Jets; one is now gone. The other is based on a circus theme, but it’s at risk of closing for good. Further afield, there’s one called Sunrise, with friendly staff, cheap breakfasts, and decor that hasn’t changed for decades. A few months ago, I asked an academic friend to go there for breakfast. “Aren’t we better than that?,” he said, joking. We went to a high-end diner instead. The Sunsrise Diner is now shut for renovations, most likely for good. The diner simulacrum is still open.

4. The Pizza Joint as Liminal Space

In the thin, isosceles triangle made by the meeting of  Main, Barton, and James, there are a dozen pizza shops and half a dozen sub shops with names like Hot Stone, Hammer, Lava, Royal, Bruno’s, and Bella. They’re run by first- or second-generation immigrants from India, Lebanon, Syria, China. The pizza is delicious. These are not traditional restaurant spaces as much as spaces that move between the public and the private. That said, an important part of moving into a new neighbourhood is asking your  neighbour which local pizza space is the best. 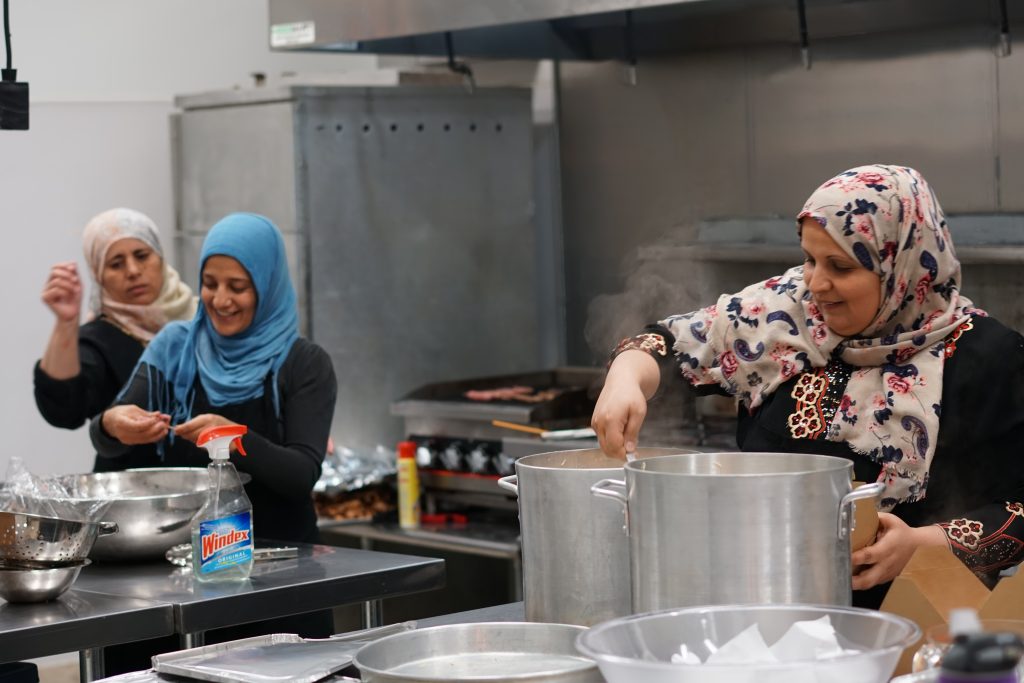 Some of the best food I’ve had in Hamilton came from Karam Kitchen, a catering company run by a group of Syrian newcomers who raised money for commercial kitchen space via Kickstarter. They don’t have a restaurant and sometimes sell sack lunches. They’re fundraising for a delivery truck. Sometimes they have a space at monthly art events on the gentrified James North.  Brittani Farrington, who helped complicate Karam,  complicates the sit down/catering/foodtruck world well: “While an event space and sit-down restaurant would open a world of possibilities for Karam, one special one being that more people would come in contact to food and people that are different than they are, I don’t know that such a dream is in the imminent future. We’re a scrappy little operation and none of us are formally trained in business, so it would take expertise that we just don’t have right now.” I want Karam Kitchen to have a dedicated space: the food is brilliant. It is easier to find an $18 hamburger, than it is to find a good Syrian meal, and the hamburger is bound to be less interesting to eat.

6. The Columbusing of “Ethnic Food”

Toronto, Montreal, and Hamilton all have problems with food trucks, which seem to end up pushed to the edge of parks during community events. In Hamilton, you can’t buy a taco at 3 am on the street like you can in New Orleans; you have to spend $6 on one in a restaurant.  I think about the plastic grocery bags full of empanadas I bought in a parking lot in suburban Chicago; I think about chicken in Nashville, or BBQ in Memphis in formica-and-plywood shops that I hope won’t collapse. I even think about the strip malls in Scarborough, where I can get a Peruvian dinner or a Trinidadian double or a dozen samosas for seven bucks. I can tell you where to get really good Peruvian food in Hamilton. One of the strip malls near a mosque downtown has really great Somalian food, and there’s a solid Ethiopian joint, and two or three Trinidadian places. But these aren’t written about as often in the Globe and Mail, especially when the national paper of record moves beyond Toronto. They’re not quite a “scene” yet. The way they talk about food that might be different than white folks are used to still smacks of Columbusing. It might be why the only real street food are modified RVs serving flash frozen, fried foods, in the parking lots of Timmys or Busy Bee convenience stores. 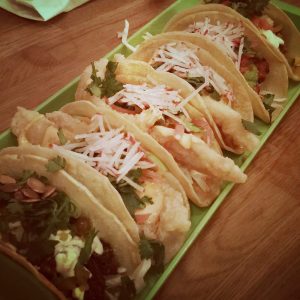 Tacos at The Mule

The Mule is one of the places I can get a $6 taco. It’s run by the owners of The Other Bird, who own several bars that have excellent food in an Instagram-ready style, not much different than Brooklyn or Toronto or Montreal. They also own a snout-to-tail fine-dining restaurant and an event space in Paris, Ontario. By “own,” I don’t mean the buildings, though they do own a few of those. A few weeks ago, the owner of the Other Bird empire and a few other members of Hamilton’s elite staged a pop-up on Toronto’s Queen Street West called Hamilton Embassy which they used to try to convince people to move from Toronto. Their argued that Hamilton has become a cultural capital, in the Richard Florida sense of the term. 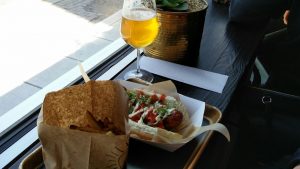 Merit is a new brewery run by Sue Littleton, who used to manage some of the Other Bird properties. The brewery has a restaurant attached—it mostly serves sausages. The food is good. The cider (which they don’t brew on premises) is excellent. On my third or fourth visit I sit down and talk to Sue and she explains to me that the place is supposed to be financially accessible. While it’s definitely less pricey than some restaurants on this row, I’ve also seen it full of beer snobs. Families and young creatives also come here. There’s an armoury further down James Street, and this is the only space where I’ve seen soldiers come. I ask Sue what she feels is missing in Hamilton, and she mentions regional Indian food (though there are a few good Southern Indian joints), Korean BBQ, among others.

Sue is convinced that the farm-to-table ethos isn’t just an aesthetic argument but a moral one. Merit tries to allow for a wide range of customers, and to expand the idea of what beer and sausages can be. Food is about connections; it is one of the most intimate things human beings can do together. (I go to church with Sue, and store furniture in her garage.) Merit is often full, as are the Other Bird properties (I go to one every few weeks to play trivia; it attempts to be a genuine community space.) 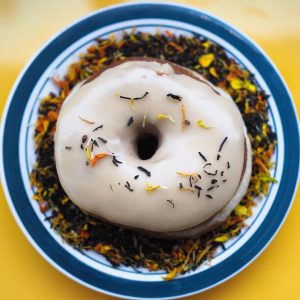 In the communities I run in, donuts are a hot debate. Donut Monster is often pitted against Grandad’s. Monster costs about $3 a go. Monster is a donut with a theoretical and material heft. Grandad’s is thick, old fashioned. My friend from Winnipeg says they’re similar to Robin’s, a Western Canadian donut chain. I like Grandad’s better than Donut Monster because I still buy into its false nostalgia, though I will often eat a donut monster at a local coffee shop. Coffee shops are thick on the ground here, and art-directed to an inch of their lives. People work in them , meet in them, eat and converse and make community in them. They are central to understanding the new, creative Hamilton. Here’s a  secret that no one tells you until you move here: the fight between Granddad’s and Monster is a fight between two understandings of a city. It’s useful to note that the coffee shop people use and mythologize the most here is Tim Hortons. Canada’s first Timmy’s is on Ottawa Street, and it is the only one with a monumental bronze statue of Tim Hortons himself, right out front.

Monster and Granddad’s can be enjoyed at the same time. We have to be cautious about setting up binaries. The conversations we have about food tend to reinforce already fixed ideas. Food, like other elements of culture, holds social and ideological baggage. In my attempt to  unpack those ideologies I noticed that how we talk about gentrification is not necessarily how we eat. Loving Hamilton is not loving its potential, is not loving it for what it could become, but loving it for what it actually is. That means we need to avoid romanticizing working-class grit, or thinking about it as Brooklyn, or Toronto.