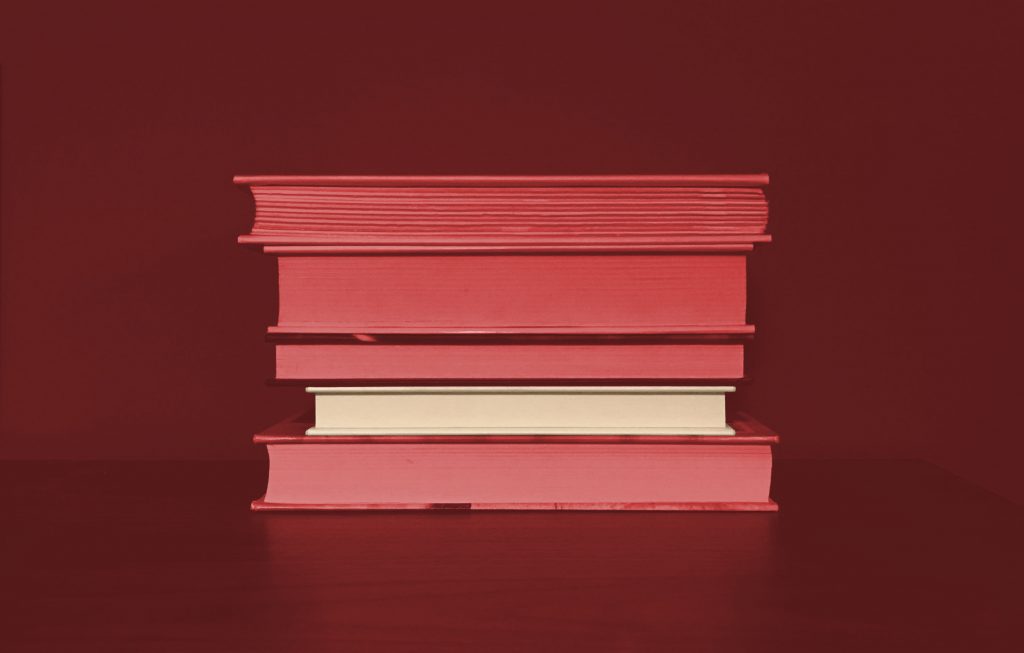 In the fall of 2016, I was convinced I’d been longlisted for the Scotiabank Giller Prize.

This error was the product of that curious mix of hubris and post-partum elation a first novelist feels in the months after their book—for so long a private thought, a measured hallucination—finally becomes a real thing.

It was also the product of my excellent Photoshop skills.

You see: every year, about a week before the first big announcement, the Giller Prize tweets a photo of the twelve longlisted books stacked with their spines facing away from the camera, incognito. At first glance, all you can really determine from this picture is the general size and format of the books; hardcover/softcover, slim/thick, deckle/flat edges, etc. But, if you’re compelled to look closely (to, say, download the photo so that you can magnify it x1,000 and really examine each cluster of pixels) there are other clues to be found. The angle at which the photo is taken sometimes reveals peeking-out parts of the front and back covers. Along the narrow edges of the hardcovers, where the jacket flaps fold over, one can distinguish slivers of colour and shape. And, once you’ve identified one book, you can use it as a reference to deduce the exact dimensions of the others.

So that’s what I did.

I had reason to be interested in that photo: I knew my novel had been submitted for consideration (multiple wheedling emails to my publisher confirmed this), and I knew that Jeet Heer was on the jury—I’d seen photos of him sequestered with other judges in their lavish woodland lodge—and it just so happened that: (a) I’d once written a laudatory essay about Heer’s literary criticism, which I knew he’d read (he’d liked my tweet about it, at least), and (b) about a month before the announcement, just to remind him of who I was and how much I loved him (and also to remind him that he might, theoretically, owe me a solid) I asked a friend with a significant Twitter following to retweet a link to the essay and, of course, to tag Heer in it—because an avalanche starts with a pebble, right?—and, besides, I’d already done the good work of blowing my expectations wholly out of proportion by marking the date of the longlist announcement on my calendar, and, as a result, had immunized myself against whatever shame such acts of self-promotional depravity might stoke in me.

Here is what my forensic analysis of the Giller photo revealed:

The big tome at the bottom, with its speckles of yellow fading to foggy grey, was obviously Steven Price’s By Gaslight. My agent had told me it was a shoo-in, and it turned out she was right. The modest hardcover in the middle, with the reddish band along the bottom and bit of pink at the top, was clearly David Bergen’s Stranger. The new Emma Donoghue was particularly thick and sturdy, so I was 90 percent certain it was the thick, sturdy volume second from the bottom. Of the unidentified books, several were clearly not mine: too thin, too tall, the wrong type of paper. But a few others were kinda the right size, sorta the same shape.

But kinda/sorta wasn’t good enough. I needed to know for certain.

So I went to the Chapters across the street from my office and found the three books I’d identified. I stacked them, spines reversed, right there on the edge of the Hot Fiction table, and built an imperfect but serviceable re-creation of the Giller photo. Then, to ensure an accurate sense of scale, I put a copy of my novel on top of them (which, full disclosure, did not come from the Hot Fiction table, but from an obscure, ground-level shelf on the second floor, accessible only by a broken escalator). I took a photo of the stack. Several photos. Each at a slightly different angle. You know, just in case.

Back at the office, I fired up Photoshop and put the two images—the official Giller pic and my own—side by side. Hope sprung, a thrill titillated, caution wilted: there were, indeed, at least two books that could have been my book.

And once you’ve gone this far, what’s the point in stopping?

(In truth, I wanted to quash that hope, kill that thrill, un-wilt my caution. I felt like I could bear the disappointment better if it were the product of my own cleverness; I’d rather deliver the bad news to myself, through this byzantine exercise, than wait for the official press release like all the other suckers.)

It was in the spirit of self-discipline (I swear) that I dropped the photos on top of each other, turned the layers transparent, and began the meticulous work of aligning the edges and corners to ensure the proportions were perfect, that my measurements were flawless, that every pixel found its doppelganger, and, sure enough—

The third book from the top was the exact size and dimensions of my novel.

I closed Photoshop, opened a new document, and began to compose the acceptance speech in which, to grand comedic effect, I would reference this very moment in history.

Laugh if you want. You know how it all ends. But, for a moment, consider this: what are the odds that some other book—the same height, the same page count, the same paper quality—would be published at all, anywhere in the world, let alone here in Canada—let alone be nominated for a prize I knew my publisher had submitted to?

Can you really blame me (empirically, I mean) for getting my hopes up?

But for me, honestly, the promise of a literary prize (and the immodest things it made me do) wasn’t about artistic validation, or being recognized by my peers, or the money, or the accolades (though I refuse to believe that money and accolades don’t matter, because they do; ego matters, it’s the thing that compels you to play God with your characters in the first place, and your ego, like any other machine, needs fuel to run). All the stuff that prizes seem to be about—acceptance, recognition, cash dollars, self-regard—are actually peripheral. The thing you really win is the permission and privilege to keep writing.

It means more hours at the keyboard, scrawling in a notebook, daydreaming, sitting in a coffee shop, a bar, in bed, alone, talking to yourself, entranced, elated, frustrated, exhilarated. It means fewer hours scraped away from evenings and weekends, and less resistance from publishers and publications. Less resistance, too, from loved ones, who, though undyingly supportive, often wonder: wtf is the point of all this? To be longlisted for the Giller Prize—or whatever-listed for the whichever-prize—would be, for me, a small step further into that alternate reality where, by invisible degrees, I am more fully a writer.

I’ve heard some people say, upon winning some honour or another, that their satisfaction lies in the knowledge that more people will read their work. And, yeah, sure, that’s cool (I guess). I’ve heard others say that they don’t care about awards at all. To me, the latter are like those skinny folks with a Tyrannosaur’s metabolism who brag they can eat whatever they want without gaining a pound; blind to their own good fortune, deaf to how obnoxious their virtuous indifference sounds. What a privilege to be above such things! What luck to find yourself in that elite, enlightened class, so deeply connected to your art that you can practice it completely independent of how it has impressed itself upon the world.

I’m not there. Not yet, anyways (I won’t dismiss my capacity for virtuous indifference). I’m still fighting against self-doubt, fighting against anonymity, fighting against Time (and Time, so far in the history of the universe, remains undefeated). In these battles, a prize nomination is a powerful weapon to wield—

Or so I assume.

Because I don’t actually know what it’s like to be nominated for a literary award.

Like most early-morning Twitter users, I was sitting on the toilet when I got the news. So: doubly-humbled. I scrolled through my feed and I saw that the Giller Prize had, just minutes earlier, tweeted out the uncensored version of its longlist photo: those dozen books, stacked in the same order, but turned around, boldly baring themselves for the camera. My novel wasn’t among them. It took me several scans, up and down, to confirm this.

The book, third from the top, that I’d thought was mine?

Only in retrospect do your most glaring miscalculations become clear. The one book that, even more than By Gaslight, was a shoo-in for the prize. The book I would have picked myself, had I spent a weekend in that five-star mountaintop aerie working out the algorithm with Jeet and the rest of them. And, suddenly, a flood of repressed memories: the way I’d tweaked the proportions of my photo to “account for lens distortion”; the way I’d dismissed the strange colouring of the pages as an effect of poor lighting. 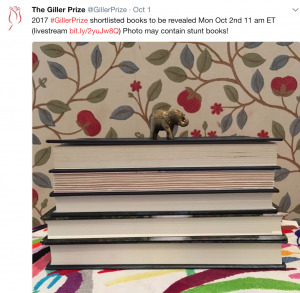 I showed up to work (to the job I’d naively hoped a nomination might enable my escape from) in a black, self-pitying mood. I’d been catfished. But not by the Giller committee. Rather, by my own stupid hope.

I can tell myself now that I’m glad I was wrong. But I’m not glad. Not really. I can tell myself, too, that I was the only one fanatical enough to examine the photo with such enthusiasm. And yet the disclaimer that accompanied this year’s tweeted photograph of the secret stack, “Photo may contain stunt books!,” strongly suggests this was not the case.

One of the things you learn as a first-time novelist is that your book is a very different thing once it’s outside of your head. It’s no longer an extension of your self; it’s a separate entity. And that separation gives you a very different perspective. I’m proud of my book in the same way a parent is proud of their child: painfully cognizant (and fiercely defensive) of its flaws; perpetually aware of its capacity to embarrass me; vehement in my mission to see it treated well by the world. In that sense, I remain unashamed.

I’m writing another book now. Scraping together hours, disappointing my undyingly supportive loves ones. But it will be worth it. You know why? Because it’s good. It’s great. It’s quite likely the best. And it will be a crime against the arts—against humanity—if it’s not at least longlisted for one this country’s major literary prizes. Which is a crazy thing to say out loud, right? It’s arrogant, smug, entitled. It’s competitive, covetous. But it’s true. Because it has to be. Because believing that this book is great, that it could win, that it will mean something in the context of our shared human/cultural subjectivity is the only way to get it done, and the only way to justify those intimate disappointments.

So, when awards season rolls around again, when I’ve once again cajoled my publisher into submitting my book for every single prize it might qualify for, I’ll play it cool, I’ll pretend not to care, I’ll say all the right things. But when the Giller Prize tweets that photo, you better believe I’ll be all up in those pixels like a motherfucker, clamouring to see if I’ve earned the privilege to write for just a little while longer.